Maybe you've seen this, since it's now all over even the American news this morning? Some skeletal and intestinal remains along the shores of Loch Ness... 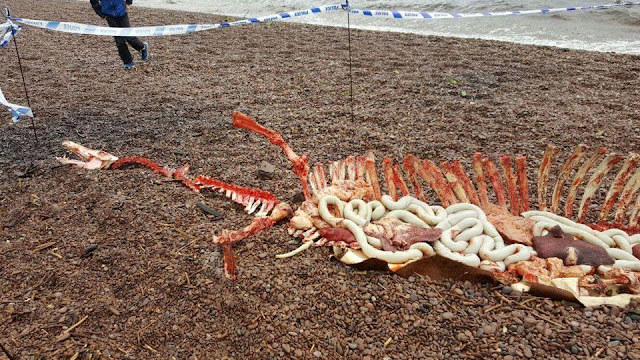 It is, of course, a prank.  And a funny one.  But not a very anatomically correct one.

Now, I'm not a zooarchaeologist, or a paleontologist, or a cryptozoologist, so take this opinion for what it is... but that looks like a pig skull (going based on the teeth here), three vertebral columns stuck together as if one long neck, probably some cow legs, a bunch of rib cages stuck together (again, probably cow judging by the size and by people's ability to get it easily).  And then a whole bunch of intestines and other offal.

If you have a better idea of what those animal bones are, do feel free to comment.

What would the Loch Ness Monster's actual skeleton look like, though, you ask?  I imagine, since it's supposed to be some sort of holdover from past epochs, it'd look more like a dinosaur -- maybe a diplodocus or, even better, the semi-aquatic nothosaurus that's been found all over Europe and Asia.

So while I appreciate the elaborate nature of this prank, the frankenstein quality of the Nessie "skeleton" could have been better staged.


---
Previous Installments of Who needs an osteologist?