Who needs an osteologist? (Installment 36)

This time on "Who needs an osteologist?" we find that our own umbrella organization, the American Anthropological Association, needs to learn what physicalbiological anthropologists do. 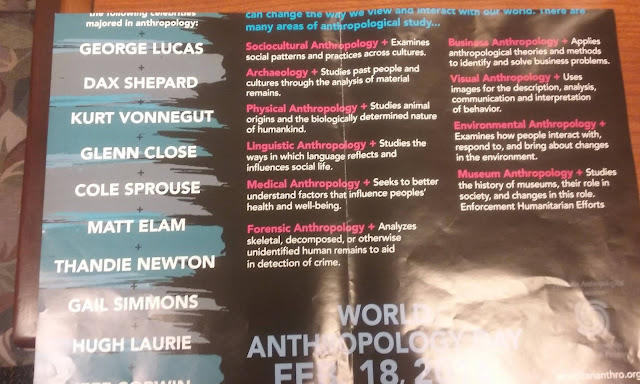 In case you can't see the image, "Physical Anthropology + Studies animal origins and the biologically determined nature of humankind."

The AAA has -- let's say -- a history of not really understanding where we bio folks fit in. So let's take this word by word...

Physical -- Yes, this word is still preserved in our early-20th-century origins, such as the American Association of Physical Anthropologists and the American Journal of Physical Anthropology.  But very few people in the field still use the term "physical" because of its racial and racist origins.  Just... look up the history, AAA.  We favor biological now to show our focus is on more than just the physical.

Biologically-determined nature -- I said I wasn't going to swear in this post, but FFS.  We're anthropologists.  It's nature *and* nurture.  We don't ignore culture.  That would be insane and very late-19th-century of us. This one phrase reflects decades of incorrect value-judgments placed on our work.

And a bonus -- You know that forensic anthropology is part of biological anthropology, right AAA?  Or, if you want to call it an applied field, that's fine too.  But then lumping bioarchaeology in with... well, it's not covered under your definitions of archaeo, bio anth, or forensics, so I guess we don't exist.

"Biological Anthropology + Studies the origin, form, and differences in human and non-human bodies to answer questions about evolution and past societies."

Update (2:19pm CST) - I got an email from Jeff Martin, the Communications and Public Affairs Director for the AAA.  The text follows:

Our most sincere apologies, and duly noted. We will use the following definition to correct other versions, including those on our website under World Anthropology Day, and promote from the present forward.

“Biological anthropologists study contemporary and past peoples; they look at how culture shapes our biology and vice versa, and also how different biological systems impact our health and well-being.”

Thanks so much for letting us know.

It sounds like others who expressed disappointment in the AAA got a similar email.  Of course, with the AAA's doing a complete 180 on the animal subjects, the primatologists (who are biological anthropologists) are out in the cold, along with geneticists and others.

So, close but no cigar, AAA.