Who needs an osteologist? (Installment 22)

As Roberto Cighetti helpfully pointed out to me on Twitter, Polish archaeologists working at the site of Kamien Pomorski need an osteologist: 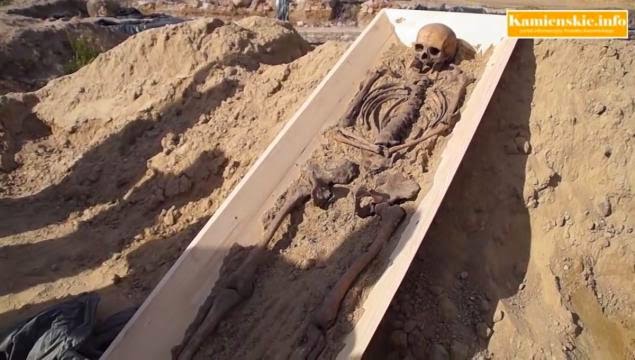 Inside my head: "Oh, alright, it's a so-called vampire burial.  Fine.  But it's weirdly on a platter because they... Waaaaaiiit... Are those humeri and radii all upside down...?" 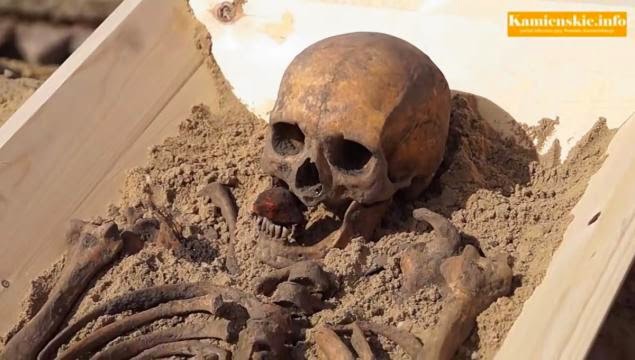 Out loud: "Oh, FFS.  The humeri are upside down, the right clavicle is wonky, the left scapula is rotated, and don't get me started on the ribs...  But hey, nice metopic suture."

I don't doubt that the burial was in the "revenant" style.  Loads of them have been found from this time period in Eastern Europe.  But I have no idea what the archaeologists thought they were doing here, taking the body out of the dirt, then putting it on some sort of bier without even looking at the pictures I assume they took of the body before excavating it completely.

This is an old story (from about a year ago) that I missed.  The Huffington Post coverage has a video in Russian (?) Polish that seems to be an interview with an archaeologist (who bends down over the skeleton that's clearly not in anatomical position), but I can't find a translation or a good way to run it through Google translate.  So if any of you speak Russian Polish, let me know if the video has any additional info!


-----
Previous Installments of Who needs an osteologist?

Kristina Killgrove said…
Thanks! I clicked on the "closed caption" option on the video, which told me it was Russian. I have fixed it in the post now.
07 April, 2015 11:59

Venividi Coxi said…
Ok, the guy there IS speaking Polish. In the film there is not much more info than you can find in the text. The burial is a typical one for that region (position of the body and all). He emphasizes it is strange that the burial (although vampire one) was within the limits of the church graveyard and explains it is because the graveyard borders were changing through the time. Also, they suspected the leg was shot at but no bullet was found and so it must have been some sort of spike that had caused the damage. Also, he says they suspect it was a man and a victim of a plague. He adds that the skull was found in "more or less present state"... The guys behind the camera make some political jokes, so the rest is not important.
08 April, 2015 09:46

Unknown said…
Well I found it really funny in the same way as the placement of the bones is. So not exactly funny at all. First of all he is speaking about the burial as presenting typical anti-vampiric practices (it is very fashionable trend in Polish archeology to recognize burials of potential vampires, and although it can be taken as swagging more often by countryside archeologists then those from universities). The so-called anti-vampiric practices mentioned by this guy are forcibly puttng fragment of brick inside mouth (he is explaining that it was done forcibly, because the procedure has caused loss of nearly all upper teeth - of course not true, as I clearly see that the were lost antemortem with severe alveolar process loss) and the second is the some kind of lesion which he sees on the left femur (he is kind of showing it further on, but the cameraman do not show it clearly, seems like the roundish hole, with postmortem fractures going through it? cannot really say anything about it), which he explains as a result of drilling with some iron junk (his words, not mine) for preventing rising from the grave. Then he goes for archeological informations, also nit very informative - he says that the position of the skeleton is typical for the area from 13 to 18 centuries (I'm afraid he means position of the body, not the placement of the bones, which is probably rather his doing) with the face turned to the east. Then he talks on the actual use of the cemetery (with breaks from 13 to 18 centuries), he states that he dates the burial to 16-17 century (then they try to joke about Poland being part of EU then - more try then joke actually and I would like to point that those areas were ruled by Germans/Danes/Swedes at the time and therefore were not part of Polish Kingdom) and discusses placement of the burial on the edge of cemetery. He explains that they first expected that the hole in the femur was a result of musket wound, so they very carefully have checked the soil underneath it, but they haven't found the bullet. Therefore they think it was some kind of the skewer. The woman asks if they found the tool and he answers that they did not. Then he goes totally nuts blabbing about the closest analogy comes from Venice, more precisely an island called Lazzaretto Nuovo, where the burial of the woman dated for the 1574 year has been found, who had not a fragment of brick but a whole brick put forcibly in the mouth. Then he starts to fantasize that he (the guy on the film is 'pretty sure that is a he') could have been buried during some plague occuring in the period of Thirty Years' War. Then the film ends. I found some additional information and there has been a notice that the skeleton has been transported to Szczecin for further analysis, where an anthropologist confirmed that 'antivampiric procedures' were implemented. Thats pretty much whole translation, as far as the blowing wind allowed for understanding. Hope it helps and pleas ask away if you have any additional questions.
08 April, 2015 18:26

Kristina Killgrove said…
Thanks for the translation summaries, "Venividi" and Elzbieta! It sounds like the video in no way cleared up the weirdness going on with the presentation of the skeleton.
09 April, 2015 08:40