The Master in the Slop
Episode Summary 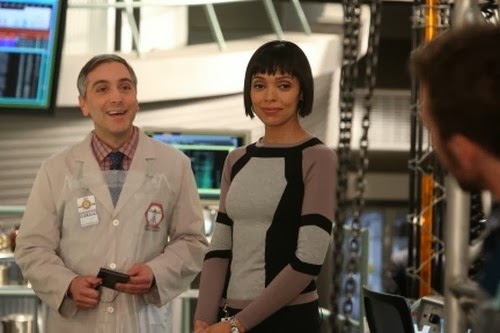 The Jeffersonian gets sent a giant vat of pig slop in which there are human remains. Hodgins devises a filtration system to separate the liquid in the slop from bone. Brennan asks Saroyan for an intern to help out with the case, and she offers her Dr. Philmore, the Canadian forensic podiatrist.  Since we last saw him, Dr. Philmore has picked up a PhD in forensic anthropology and is in town to collect data for a paper he's working on regarding collaboration in forensics between Canada and the US. Brennan picks a piece of os coxae out of the slop and pronounces the person male based on the greater sciatic notch and 29-35 based on the auricular surface. Philmore finds an incisor and announces the person is Caucasian based on the spatulate shape. Hodgins sprays Philmore with remains because the writers love goo this season. Brennan and Philmore are pretty sure this wasn't an accident, as they find evidence the victim was dismembered: a reciprocal saw was used to sever the head of the femur, and there are false start kerf marks on the radius. It is difficult to ID the victim because of the damage to the skull: the left side of the frontal bone, the left maxilla, and right zygomatic are all missing. But a giant fracture on the occipital and avulsion fracture on the left mastoid process suggest possible cause of death. The team finds brown hair in the slop but blonde hair on the victim. Hodgins notes traces of chestnuts, which Philmore suggests farmers use to sweeten slop so pigs will eat it.  Someone wanted to dispose of the body quickly.

Booth immediately calls in Jerrick Henry for questioning.  In the past, he was accused of using pigs to dispose of a body.  Jerrick admits pretty quickly to having dismembered and dumped the body, but he insists he did not kill the victim.  The body was dropped over the back wall of his property. Since he saw the victim's face before dismembering him, he cuts a deal with the FBI so that they can ID the victim as Albert Magnuson, a chess master.  Magnuson's fiance, Suzanne Levitt, last saw him two days ago.  He lived with her and her chess master son, Tim. Although Suzanne controlled Magnuson's riches from chess, she insists she did not kill him and points the FBI at Magnuson's ex-wife Ingrid, who burned down his apartment.

Sweets, meanwhile, infiltrates the chess club since he was a boy genius and is amazing at chess. Tim talks about Albert as his mentor. A woman named Ahn Ni talks about how Tiffin Olan broke Albert's hand with a chess timer. Some creepy chess guy acts all creepy.  Booth and Sweets check out the parking lot, where Albert had a reserved space.  The lights and security camera are all broken.  The rest of the Jeffersonian team comes out and finds blood on the ground near Magnuson's parking space and on the wall. Angela tries to get information from the security camera, but the hard drive was fried at 2:30am. The body was dumped at Jerrick's house at around 3:30am.

Booth questions Tiffin Olaf, but he has an alibi: he was arrested for soliciting on the night Magnuson was murdered.  He then questions Ingrid, the ex-wife, who is very religious and was upset to receive photos of Albert and Suzanne in flagrante. Hence, she set fire to his apartment to cleanse it. She doesn't have a great alibi.

At the Jeffersonian, the team finds burned flesh in the pig slop, and DNA confirms it's from the victim. There are microblisters in the stratified squamous epithelium and the external horny layer, as well as enlarged vacuoles in the epidermal cells. The tissue was taken from the feet, whose bones also show avulsion fractures from subluxation. Adding to this the fact that the capsular ligaments and the calcaneal(?) ligaments show signs of stretching and abnormal position, and it appears the victim was electrocuted in the garage. The killer tapped into the electrical panel in the garage and created a circuit with clamps, wires, water, and rock salt. The shock blew off Magnuson's toes and threw him into the wall.

Sweets heads back to the chess club to play a bunch of people.  When Tim plays him, though, he notices something odd: Tim is unwilling to sacrifice his queen to get into a better position to win. Sweets reads this as Tim's being unwilling to sacrifice his mother, so he arrests him on suspicion of murdering Magnuson. Meanwhile, Angela gets a partial image off the security camera, of the instant Magnuson died. However, it's time-stamped 12:30, which means Tim has no alibi and someone tried to erase evidence. Since Tim took an electrical engineering course in college, he has the knowledge to create the circuit that killed Magnuson. Since he's a sociopath, though, he won't admit it and gives up no information... until Booth and Brennan collude to make Tim think that Suzanne is being arrested for Magnuson's murder. When Tim sees his mother in trouble, he admits to the murder.

In the B story, Saroyan is being honored as an outstanding woman in science by a magazine, an award that usually goes to Brennan. This upsets Brennan, so Saroyan gets the nominating committee to include Brennan and Angela. When information arrives about the award, apparently the magazine wants instead to have a bikini-clad pin-up spread of the best female scientists in the world.  Brennan reads the list of names and very quickly agrees to be a part of it.

Ratings
Forensic Mystery - D+. I thought it was pretty obvious Tim did it. The mystery wasn't very interesting this week.

Forensic Solution - D+. Demerits for the incisors used to assess ancestry. And for telling at a glance what age the auricular surface suggested. And for not getting a positive ID.

Drama - F. Wow, was this a super boring episode, or was it just me?  The grade here reflects the B plot about outstanding women in science. That entire plot made me want to slap the (I'm assuming) all male writers for being horribly sexist.

Unknown said…
Thank you so much. I was searching around and could not really find another review that even seemed to question the "Calendar" idea.

Seemed so ridiculous that a magazine of science who routinely do a "Outstanding woman of science" award decide they need to make big bucks and increase reader ship by turning it into "Perv on 12 ladies in bikini's" of science.

Your commentary and points about the 'science' of the show are great too.

Unknown said…
I don't think I heard wrong, but Dr. Philmore was referring to the coracoacromial ligament while examining the foot x-ray. I didn't hear any reference to the shoulder region during the examination. Cringe!
25 January, 2014 16:21

Kristina Killgrove said…
I thought I heard coracoacromial ligament too, but then I thought, "That can't be right. That's not in the foot! Surely the writers aren't that clueless."
25 January, 2014 16:26

#19 said…
The whole Canadians and Americans never cooperate is not only real-world stupid, but the Kathy Reichs books take place in both the US and Canada alternately!
25 January, 2014 16:27

Lorian said…
Yes, the "Women of Science" calendar portion of this episode made me ill. Thanks, "Bones," for throwing women's equality in the STEM disciplines under the bus. Yuck. I expect better from this show and from the Brennan character. So glad you called this out.
14 October, 2014 19:26