Skip to main content
Posted by Kristina Killgrove May 08, 2012

The Suit on the Set
Episode Summary
Brennan, Booth, and Christine have traveled to LA to be on the set of Bone of Contention, a full-length movie being made from Brennan's book of the same name.  The stars, Cherie Redfern and Blaine Conway, are playing the fictionalized Brennan and Booth - Dr. Kathy Reichs (true to the name-flipping conceit of Bones) and Andy Lister (rather than Andrew Ryan, the love interest in Reichs' Brennan books).  The set is awash in fancy, blinking things and is emblazoned with WISK, the Washington Institute for Science and Technology.

Brennan is initially upset at the revisions to her screenplay, but she and Booth settle in to watch the filming.  When Redfern as Reichs says something along the lines of, "The victim has penetrating trauma to the chest bones followed by a massive cardiacal eruption.  I could extract the medial epicondyle..." then breaks open the chest cavity, Brennan loses it and complains about the mistakes in the science and dialogue.  Mandy Oh, the VP of production, insists they have a consultant on staff to keep the science on track, but Brennan quickly finds out it's Doug Philmore, the Canadian forensic podiatrist from S06E17 (one of the better episodes from last season).  Philmore is doing his best, but he is also chagrined that the director, Jocko Kent, doesn't care about the science. 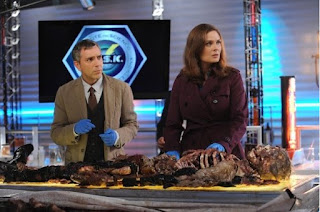 As a new body is being swapped in for the one Redfern broke, a stench pervades the air.  Brennan and Booth quickly realize it's a real body, then get permission (from the VP of production and head of security, because no need to call the LAPD, folks!) to solve the murder mystery.  The victim was a man in his mid 40s, and based on the state of decomposition, he had been dead around 90-120 hours.  According to Philmore, the set is a fully functioning laboratory because it would cost the same as a prop lab... because all movies have a prop budget of tens of millions of dollars in equipment and supplies?

The profusion of perimortem bone damage to the victim's arms and torso, along with the skull damage, suggest he was attacked in some manner.  The jagged edge of the costal margin of the left 7th rib suggests his cause of death was a punctured aorta.  The actor playing the Hodgins character inserts himself into the investigation, since he has a doctorate in botany and microbiology from UC Berkeley.  Foliage on the victim's shoe is Laurus nobilis (bay laurel), common in California.  Brennan lets Dr. Barry Summers consult and run tests on Hodgins' behalf.

Angela's facial reconstruction is quickly identified by Summers as Hansen Stephens, the head of the studio.  His head has traces of brass and foliage on it, suggesting he was killed with or near a sprinkler.  Booth questions pretty much everyone: Stephens' assistant, Mandy Oh, Blaine Conway, and Liam Toynen (the screenwriter).  They didn't do it, even though Mandy's car had some foliage in the bumper and she's a racist troll.

Two shards of aluminosilicate, or fragments of a cell phone screen, are found embedded in the metacarpals by Dr. Philmore.  Angela goes to the data backup service again and finds texts Stephens sent to Cherie, whom he was sleeping with.  But she was also sleeping with Jocko and Fernando, the junior groundskeeper (also a movie producer in Mexico).  Philmore's reconstruction of the footprints from the scene suggests that Stephens was running from someone or something.  Based on the pattern of injuries on Stephens' bones, Angela narrows down the kind of vehicle that hit him to something with a small turning radius.

Brennan and Booth are hanging out outside Cherie's trailer, where there is a giant bush shaped like an elephant, when they realize the elephant's trunk has been repaired since Stephens' death.  The golf cart of the groundskeeper, Valerie Rodgers, matches the small turning radius, and she confesses immediately to running down Stephens, who was unrepentant that he mauled her prized pachyderm topiary.

And it turns out that Dr. Summers was in a movie with Dr. Saroyan years ago called Invasion of the Mothersuckers, making her the female Blacula.

Forensic and Plot Comments
Dialogue
Ratings
Forensic Mystery - C.  Vague handwaving about facial reconstruction identified the victim.  Most of the clues to his killing were interesting, but it was infuriating that they all came sequentially (which is necessary for the plot of the show) when most of them would come at once in a real investigation (e.g., finding two phones, finding the cell phone in the metacarpals).

Forensic Solution - B+.  There were a lot of interesting techniques being used.  If you can suspend disbelief about the presence of a fully-functioning lab on a movie set, then the majority of the forensic work was quite good.

Drama - B-.  There weren't a lot of stakes to the killing of Stephens.  I could have done with fewer red herrings, but the point was that there were plenty of people who could have and would have killed the guy.  No one would believe that Booth would move to LA.  And the Saroyan storyline was just episode filler.

ruidh said…
Missed the best line of dialog. "You give me too much credit, Dr. Philmore. You are perfectly capable of recognizing your own inadequacies."
09 May, 2012 19:21

Anonymous said…
Seeing that the writers threw in a character that is an actor with "a doctorate in botany and microbiology" reminds me: is anyone else bothered by the fact that at one point many seasons ago (I stopped watching many seasons ago), it is said that both Brennan and Hodgins have 3 doctorate degrees each. However, the show started 7 years ago and it seemed like the characters had been employed at the fake Smithsonian for at least some period of time and were not new employees, yet all were probably about early 30's (I don't recall any of their stated ages from when I watched, if they ever stated them). I have never really understood how that is possible, but then again, they said on the first episode of the show that the nearest forensic anthropologist other than Brennan was in Canada (Quebec, if I recall), so who really knows what these writers are thinking?

Kristina Killgrove said…
Yes, Hodgins definitely is said to have 2 or 3 PhDs. Even if we allow that he and Brennan are full-on geniuses, it's still gonna take at least 4 years to get a degree in forensic anthropology, botany, or microbiology. I mean, that's how long it takes to organize, fund, carry out, and write up a research project (the dissertation).

So let's say that Hodgins got out of college at 18 ('cause he is a genius) and did three back-to-back PhDs, he'd be 30 when he started at the Jeffersonian. Which means now after 7 seasons, he'd be at least 37. Not sure how old Hodgins is supposed to be, but the actor playing him is 37. So that could actually work. If we assume Hodgins skipped a few years of high school/college and that he went through three PhD programs really fast.

Same would have to be true for Brennan; Emily Deschanel is 35, so she'd have to have skipped a lot of stuff. I don't think she did at the high school level (she was bounced around in foster care).

Sweets' back story does definitely involve graduating early and being really young for his profession. Honestly, of all of them, I find the Sweets story hardest to believe. Geniuses tend to be good in the hard sciences and math, not in psychology, which involves a deeper understanding of human nature than most people have at a young age.

Philo said…
>I don't buy in any way that it's just as expensive to make a fake lab as set up a real lab. Mass specs are not cheap, my friend.

Net result on paper: less royalties that have to be paid out.

Compare to having a mass spec built by the prop manager - thousands of dollars on a box with lights that geeks will say is all wrong and which after the movie goes to sit in a property warehouse.
15 May, 2012 22:15

SatTrackCam Leiden said…
"I do buy that someone with a doctorate in botany would be in the movies. PSA: Students - academia does not pay well. At all."