The Eye in the Sky
Episode Summary
Let's just get this out of the way right here: on this Very Special Episode of Bones, Booth and Brennan find out they're going to have another baby, and Booth relapses and starts gambling again.  There.  The rest of the episode summary can commence (and will be really short because those two terrible dramatic points take up a sizable chunk of the episode). 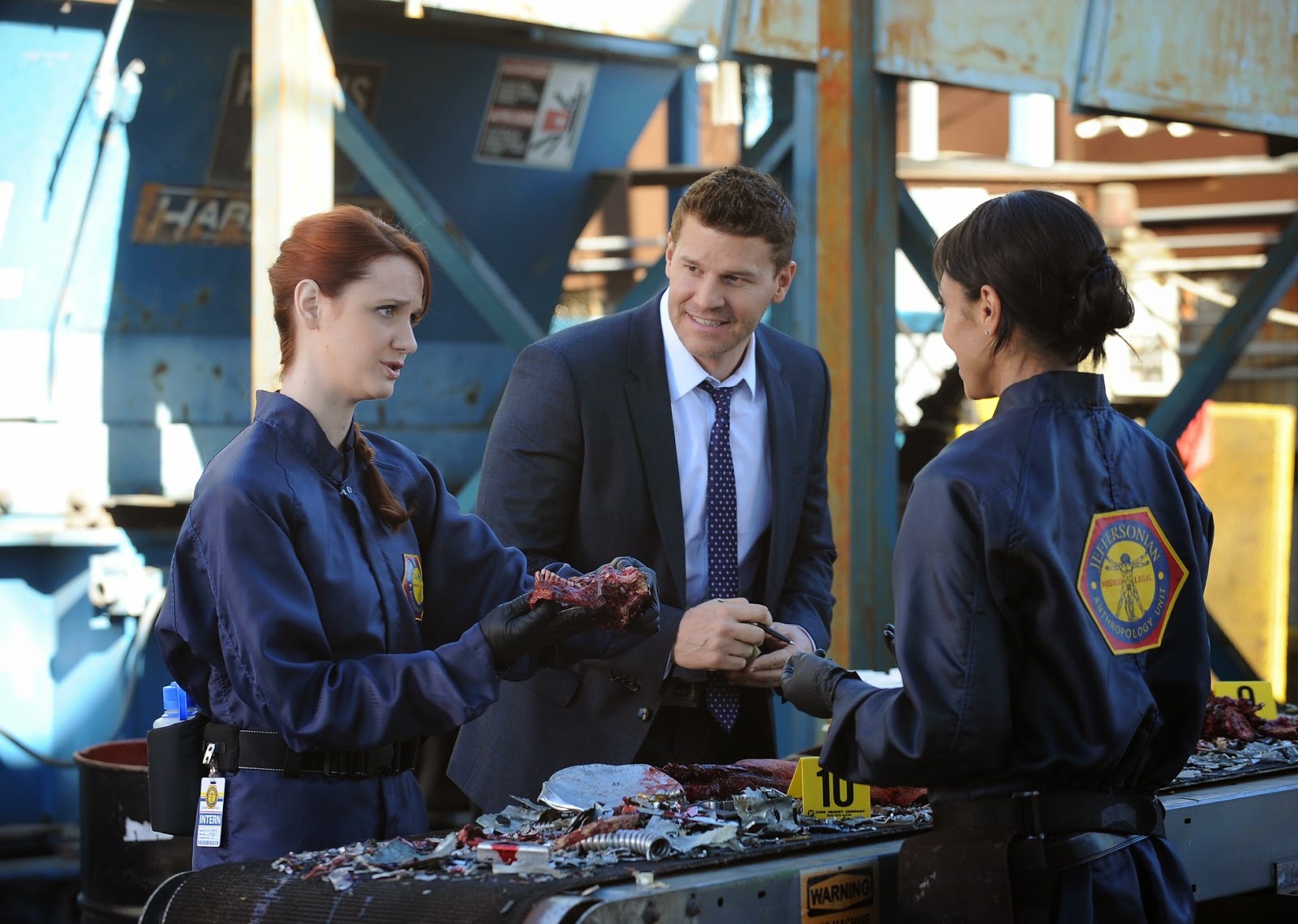 A body is found in an industrial shredder.  Due to her not-yet-disclosed pregnancy, Brennan does not go to the scene and sends intern Jessica Wick instead.  Jessica estimates based on the head of the femur and the auricular surface of the ilium that the victim was a white male in his 30s.  No sign of blow flies suggests to Hodgins that the man has been dead less than 24 hours.  The team recovers pieces of the victim's cell phone.  Saroyan notices a yellow discoloration to his flesh that suggests he was dead before he was shredded.  They also find the victim's facial tissue and skull in pieces.

Angela takes the reconstructed (off-screen) skull and fills in the missing pieces with clay.  Saroyan stitches together the facial tissue and lays it on the skull so that Angela can do a reconstruction. But since the victim was recently deceased, no one has yet reported him missing.  Jessica and Brennan notice somehow that he worked with his hands, and there are Schmorl's nodes on his vertebrae.  Together, these suggest the victim lifted and/or carried heavy objects.  Cardboard pieces in or on his arms(?) may mean he worked for a moving company.  Angela gets 12 matches in a database and narrows that down to Jeff Dover, who worked for Oz Storage and Moving.

Aubrey talks to the manager at the moving company, and she says Dover had a recent argument with Dustin West, a fellow employee. Angela finds on Dover's cell phone that he had loads of online poker apps. West admits that he and Dover were arguing over money; West lent him $10,000 to play in a high-stakes game.  Dover won $28,000, though, and told West this right before Dover died. Booth contacts his former bookie to get in on the game, so he can figure out if one of the card sharks killed Dover.

The Jeffersonian team finds a bunch of stuff on Dover's skeleton while looking for cause of death.  Multiple healed pelvic fractures and oblique fractures of the femur were from a car accident two years prior that killed his wife and child. A perimortem depression fracture on the right temporal resulting from a blow with a cylindrical weapon does not seem to have killed him. His left forearm tissue has abrasions, possibly defensive wounds, and are covered with an oily substance. A swab of the substance comes back as palm oil used in cooking.  Grooved perimortem abrasions to the right scapula and humerus don't match the teeth of the shredder.  Hodgins checks for particulates and finds ingredients common in Thai food.  The team suspects Dover was cut by an aluminum trash can outside a Thai restaurant.  After narrowing the search to places near the card game, the team looks for more evidence at the murder scene. They find pieces of muscle and cartilage from the throat, and the splinters in the tissue are not bone but wood. It seems someone jammed something in the victim's neck and pulled out part of his throat. More wood splinters are found on the hyoid, and Hodgins finds out it is maple wood.  He also finds pine tar in the victim's remains, meaning it was a baseball bat that killed Dover.

Meanwhile, Booth infiltrates the card game and finds out that there is an "eye in the sky" - a camera recording the proceedings.  He realizes there might be footage of the night of Dover's death, so he asks Angela to hack in.  She does by... pairing his phone magically with the security system by his being within a few feet of it?  She gets footage, but it doesn't really tell her much.  Aubrey and Angela look into all the card sharks' financial information (at least what is available online) and their general lives.  Nate Crowe ("Mid Life") is their best suspect, since he was having major money issues.  He also happens to be a Little League coach, and there is a photo of him online, smiling, holding a baseball bat.  Saroyan manages to get epithelial cells from the pine tar (in Dover's tissue that's been sitting outside the Thai restaurant for two days?), and they are a match for Crowe.

Oh jeez, also, Hodgins runs with an idea an intern him, invents something magical, and he will now be a millionaire.  Kinda like the time he ran with the idea for hot sauce, and no one's seen that intern since.  The writers are definitely wrapping up some story lines, seemingly in case Bones is not picked up for an 11th season.  Gotta make sure Hodgins gets his billions back, right?

Comments
Ratings
Forensic Mystery - C.  It was alright, I guess.

Forensic Solution - C-.  Also ok, but hinged on implausible things like recovery of DNA outside.

Drama - D.  I wasn't really looking forward to the Brennan-pregnancy-reveal episode, but then the writers also threw in Booth-relapses, Hodgins-creates-lucrative-product, and Aubrey-reminisces-about-deadbeat-dad.  Too much plot, not enough case-of-the-week.