The Lost Love in the Foreign Land
Episode Summary
We open on Cam and Arastoo "making fesenjaan," as they say ("it's the hardest Persian dish!") when a dead body outside of Baltimore interrupts them.  A bunch of goats clearing a field found a dead body. Based on blowfly larvae, Hodgins puts time-of-death at 6 to 7 days ago. Brennan does some forensic-fu and figures that the deceased was a female of Asian descent based on the length of the hip axis. Wear on the mandibular dentition puts her in her 20s. Harris lines on her long bones indicate malnutrition as a child. She also has osteoporosis and is missing the fourth and fifth phalanges on both feet.  Based on the robust brow ridges and sternocleidomastoid muscle attachments, Brennan figures she was Chinese. Angela gets no match for her facial reconstruction. 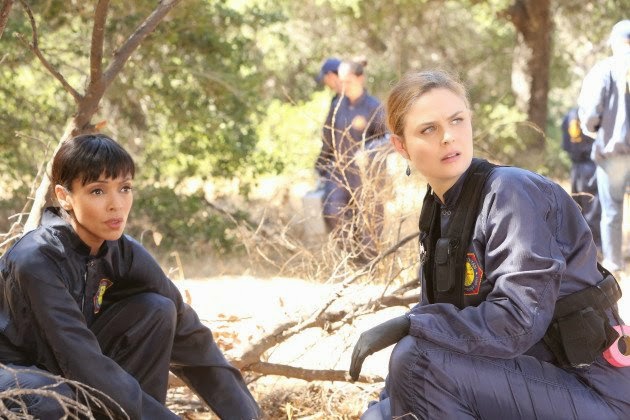 Hodgins finds a watch with a serial number on it. Angela traces that to Sandra Zins, who knew the deceased as Theresa, her maid.  She did a lot of work in Asia and her deceased husband was an importer. She found Theresa through Sunny Helpers; Victor Lee owns the company. Lee tells Booth and Aubrey that Minyung (Theresa) was his employee but he didn't know where she lived. He gives them a list of clients and names and points them at Jeremy Walford, a registered sex offender who likes Asian girls.  He denies having killed her, but gives them her bus route.

Meanwhile, the Jeffersonian team finds more information. Enlarged facets at the distal ends of the radius and ulna suggest her wrists were dislocated, and abrasions suggest they were tied. Straddle fractures in the pelvis suggest sexual assault, but there is no evidence of sexual assault in the soft tissue. Vaziri also finds slightly remodeled fractures to the sternum from blunt trauma sustained about a week prior to death. Saroyan finds histoplasmosis in the lung tissue, which leads Hodgins to cross-reference bat caves with the bus line and particulates found in Minyung's shoes. Booth and Aubrey head to the location -- a ramshackle house whose door is answered by Victor Lee.  Booth and Aubrey bust in and find a basement filled with a bunch of female migrant workers. Alex Radziwill with the State Department gets involved because of the human trafficking issue, and Tammy, who speaks for the whole group, tells Booth that Victor beat her and the others. He wouldn't let them contact their families and threatened their lives. Meanwhile, Angela puts together some photo paper recovered from goat excrement and finds the person was Sung Dae Park, who was wanted for killing Minyung's father back in China. Sung didn't know that Minyung was in the U.S.; he killed her father for beating her and they were trying to start a new life, but he was also trafficked.

Brennan notices a puncture wound to the transverse process of the C5. Hodgins reasons that Minyung lost her toes because of frostbite while she was trying to leave China. Angela finds that Lee's Sunny Helpers is actually owned by Sandra Zins, and Booth questions her and then arrests her on suspicion of murder.  Without an idea of the cause of death, though, he can't hold her.  Vaziri then finds an abrasion to the lower edge of the mandible; the location and severity would have severed Minyung's carotid artery.  Brennan works with Angela to narrow down the weapon to a cuticle pusher used by manicurists. Booth realizes that Tammy, who worked in a nail salon, killed Minyung.  She eventually confesses.  Minyung was beaten by Victor for sneaking out to find Sung; Tammy thought that Victor would harm them and their families if she snuck out again, so she killed Minyung.


Ratings
Forensic Mystery - B+.  I'm still not sure where the sexual assault/straddle fractures and osteoporosis quite fit in.

Forensic Solution - D+. Ugh, all the ancestry stuff was awful. Matching the weapon to a cuticle pusher was likely impossible. Dislocation evidence was unrealistic. On the up side, histoplasmosis?

Mandy said…
Hi, I was bugged by Park too (very much a Korean name) but noticed they kept saying "Yanbian" as the place where they are from. That's the Korean Autonomous Region of China, with 50 percent ethnic Koreans. So it's not a goof after all.

Angela said…
His whole name is Korean! That really threw me off! I dismissed the idea that he was from an ethnically Korean region since he didn't look at all Korean, but stand corrected thanks to Mandy. Guess it was just a casting issue (the actor is Vietnamese American).

I wrote off the speedy turn around on the new dissertation propsal by assuming it was just the seed of an idea that he would need to develop. But I'm confused as to why Dr. Brennan is his Committee Chair. Wouldn't he need a tenured professor to accept him as a mentee to get accepted into a doctoral program? Wouldn't that professor usually be his dissertation supervisor? I figured his lab supervisor would be the outside member of his committe, not the one formally approving his proposal. Then again, I don't know your field.
20 January, 2016 07:13