Who needs an osteologist? (Installment 16)

It's the first day of classes here at UWF, which means a fresh crop of undergraduates in my Human Osteology class.  And with perfect timing, here's the case of the 38-year-old ectopic pregnancy that has been making the rounds on the various social media I frequent.  It's a pretty interesting case, and the MRI seems to show a fetal skeleton (inasmuch as I have no professional training in reading an MRI).  The Daily Mail carried a photo, though, of the doctors' attempt at rearticulating the skeleton.  And these doctors most definitely need an osteologist: 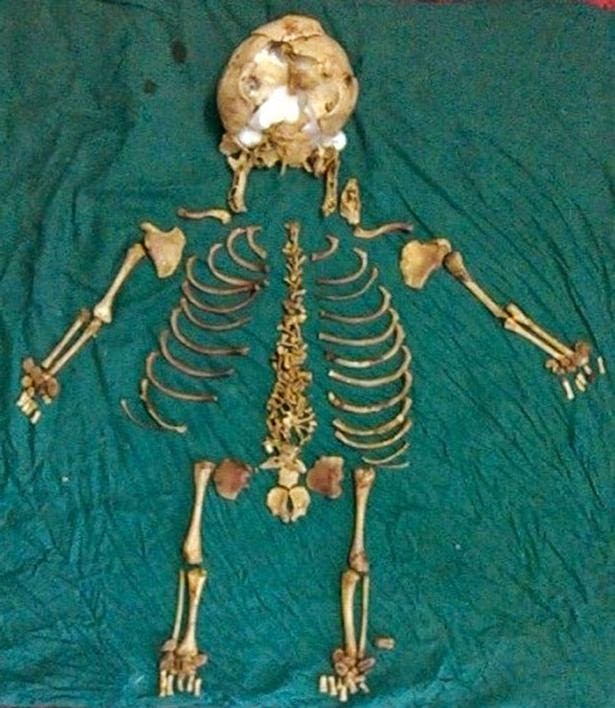 It's an insanely blurry shot, but can you pick out the things that are either wholly wrong or really rather wonky?  Spoiler alert:


Did I miss anything?


Speaking of fetal stage... there's no scale to this, but it looks pretty damn close to a neonate to me.  It makes me wonder if this is actually a picture of the supposedly ectopic pregnancy.  Ectopic simply means outside of the uterus, though, so it's possible the fetus grew nearly to term without killing the mother (and there have been other cases like this, although not quite as long-standing).

At any rate, some doctors at NKP Salve Institute of Medical Sciences in India definitely need an osteologist.


Previous installments of Who needs an osteologist?

djlrussell said…
I belive that those 'things' at the wrists are the vertebral bodies! Definitely NOT in the correct locations!
25 August, 2014 10:17

Bertha Hurtado-Koodrin said…
Not to mention the vertebral bodies located on the infant's feet and the temporal bone positioned at the mandibular region.
25 August, 2014 12:32

#19 said…
I too am not an osteologist, but I looked at the wrists and thought "backbones?"

Interesting post. I agree with the mis-identification of the bones

This is too big, and certain developmental features also suggest, that this is not a 'fetus'. I think the confusion lies in the different usage of terms in the medical vs bioarch context. E.g. all babies in utero (although in this case it isn't in the uterus!) are referred to as fetuses even if they are full term. I am writing about this in a book chapter as we speak.

I also think that they are centra in the place of the carapals and tarsals and on the left ankle there are sacral centra.