The Spark in the Park
Episode Summary
Two people out at Lake Anna in the middle of a thunderstorm find a dead body. They take pictures and attempt to protect it from the elements with an umbrella; however, it acts as a lightning rod, and the body gets struck by lightning, exploding in various directions. 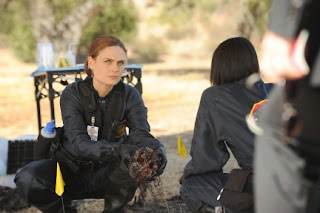 The FBI and Jeffersonian teams get called out. Brennan and Booth both note a foul smell, which Brennan describes as amaroidal. Hodgins attributes this to stink bugs. Based on blow fly larvae, he also estimates time of death at three days prior. Brennan says the victim was female based on the small pelvic inlet, and Saroyan notices the torso appears to be pre-pubescent. Slight eruption of the third molars without any attrition means the victim was in her mid to late teens. More notably, her stunted development, multiple fractures, and a metal plate in her scapula lead the team to suspect systemic abuse.

Back at the Jeffersonian, Vaziri and the rest of the team find even more evidence of trauma to the victim, including an avulsion fracture of the olecranon of the ulna (indicating repeated contraction of the tendon of the triceps), spondylolysis in the lumbar spine, prematurely fused epiphyses in the wrist, and a recent fracture of the fibula. A locket found near C4 has pictures of two adults in it, presumably the victim's parents.  Angela uses the two pictures to create an image of what their daughter might look like. This comes up with a match -- Amanda Watters, a nationally ranked gymnast whose father is a physics professor.

Sweets thinks that because of the way the body was placed -- including the face being covered by a cloth -- someone close to Amanda killed her.  Booth initially thinks it was her father, who does not seem to be processing his daughter's death like other people would. Brennan and Booth then check out the gym where Amanda trained.  Her trainer knew her for years and denies having had anything to do with her death. She was injured recently -- the fibula fracture -- by a fellow gymnast named Ellie, but she also denies being involved.  She puts Booth on the trail of Amanda's online school, and suggests Amanda was doing drugs and wasn't planning to come back to gymnastics. So Sweets gets Amanda's computer records and finds that she'd been chatting with Julian Anton about the drug molly. He also denies killing her and tells Booth about her friend Rachel who was always with her.  Booth questions Rachel and her parents; she has multiple bruises and a finger splint from falling down the stairs after her father hit her. She was planning to give up the cello, and Amanda was going to give up gymnastics. Rachel's father hit her because of this, but he denies having killed Amanda.

Back at the Jeffersonian, Angela and Hodgins work on a card they found on Amanda's body. It turns out, she had possession of her father's swipe card to get into his building on campus. She brought him dinner the night she died; he didn't remember this, which makes Booth again question whether he killed her. But Vaziri and Brennan finally figure out cause of death. The fracturing on the outer surfaces of ribs 6-8 and on the posterior plane of the sternum are signs of struggle, as is the hemorrhaging of the scalp where a chunk of hair was torn out. Subluxation and fractures to the C3 and C7 are exactly 10.16cm apart -- roughly the width of a balance beam. Booth and Brennan return to the gym and find the balance beam in question based on the traces of vomit on it; Brennan also finds a piece of Amanda's tongue that she bit off while being strangled. Booth thinks the trainer may have done it, since his passcode was used at the gym, but he denies it, saying all the girls had it. Finally, Vaziri notices that the asymmetrical fracturing to the hyoid indicates someone whose left hand was weaker than the right, and Brennan realizes the killer is Rachel.  When confronted with evidence of vomit on her injured fingers and Amanda's DNA in her car trunk, Rachel admits to having killed Amanda because she was backing out of the plan to tell her father that she wanted to quit gymnastics. Rachel had already lost her parents' trust, and she was upset with her closest friend for not going through with their pact.

Ratings
Forensic Mystery - C+. I thought it was pretty obvious who killed the victim and who didn't. So this episode was just eh.

Forensic Solution - B-. Other than the pelvic inlet/figuring out sex of a subadult, it was a pretty reasonable episode with a bunch of decent forensic work.

Drama - C.  See above; the mystery was ok. I did think the actor playing the professor was quite good. The stuff about Saroyan was lame. The writers are really struggling to give her some personality and plot outside the lab, aren't they?

edonline said…
I didn't understand the rationale behind using the parental morphing software either, other than to give the viewers a "wow" moment. The techs had photos of both parents -- couldn't they simply have done an image search on one or both of them to see if they could determine identity AND THEN ask them if they had a missing daughter. I believe Brennan even mentioned that the professor was a genius / expert in his field of physics, so presumably his photo would be SOMEWHERE online, especially connected to the university where he taught (e.g. the school's departments' information page).
08 December, 2013 17:09

Unknown said…
I've been reading your blog for a looong long time, and I must say I find your meticulous snipping apart of this show to be as much (and often more) enjoyable than the show itself!

I know you've gone into all the scientific bits... but here's an "art" bit for you that drove me up a wall today. When they found that locket and HOSED IT DOWN before opening it! I'm sorry, but in the digital era of photos (and doubtless a young girl is going to be far more likely to have done a good print out, rather than a traditional glossy print) which would have melted the moment that water hit it. And even if it was a "real" photo, which is usually a mix of organic media, such as plant fiber and cotton, it's unlikely those little photos would have survived... AND THEN HODGINS SCRUBS THE PHOTOS WITH A STIFF BRUSH!! Several times! I'm sorry, but no photograph is going to be able to handle getting fried, doused, and then scrubbed with a good enough quality for facial reconstruction. Not when the pictures are about as wide across as twenty of those bristles. Arg!
09 December, 2013 03:43

Capn Shorty said…
What I was bothered by is why the body exploded so violently.
Can someone explain what made the body do this
12 December, 2013 09:14