The Mystery in the Meat
Episode Summary
A teenage bully takes a kid's beef stew lunch and starts eating it in front of him when he realizes he just bit into a human tooth.  Other kids in the cafeteria find recognizable bits of human as well -- an eyeball, an ear.  Booth, Brennan, and some of the Jeffersonian team arrive at the school to check it out.  Saroyan picks through the stew to find bits of human meat, and Brennan assesses based on the gonial angle of the mandible and wear on the right central incisors that the victim was a 40-something male. The victim's flesh shows signs of marinating, and the bones suggest he was cut and crushed--processed like meat. 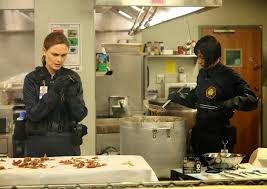 Booth and Brennan go to check out Tryon Foods, the company that supplied the canned stew to the school. The head of research and development, Susan Lauderbach, shows them around and confirms that the 6cm pieces of the victim suggest he went through their meat processor. Since there were no pieces of clothing found and since there is no bruising along the incision line, Brennan thinks he was fed into the meat processor after he was killed.

At the Jeffersonian, Daisy and Wells are getting on each other's nerves. They are finding fragments of bone in every can of stew Tryon sent them. Brennan exhorts them to work faster, as Angela needs a complete skull for a facial reconstruction. Daisy finds an area of remodelling on the anterior aspect of the frontal bone, and Wells notes that the incision is consistent with a frontal craniotomy. Off-screen, they find out that the victim was Howard Compton, a 41-year-old food scientist who had surgery to correct his anosmia, who was reported missing by his business partner, Agatha Bloom.

Booth and Brennan pay a visit to Bloom, a bromatologist with acute hyperosmia. She thinks Compton was working on something worth a lot of money, but she has little information beyond that and denies killing Compton.  Booth then questions Sam Gifford, the CEO of Tryon Foods. He reports that he wanted to hire Compton full-time, which would mean passing over Lauderbach for the job.  They then interview Lauderbach, who denies killing Compton, even though she didn't particularly like him.  She did test the stew and sent it out, although since it failed some quality tests, it went to their second-tier market, which includes schools, prisons, and retirement homes. Her alibi is solid -- she was out of town researching the use of bugs as alternate forms of protein.

The Jeffersonian staff are still working on isolating cause of death.  Wells finds partially remodelled comminuted fractures to the right anterior carpals and metacarpals. Daisy runs a histological analysis and finds out the fractures were just two weeks old. Compton did see a doctor for this, although he claimed he'd fallen.  Wells doesn't believe this, though, as they would expect to see a Colles' fracture rather than these comminuted ones. These suggest blunt force trauma instead of an accident.  Compton had been in touch with police because he thought he was being followed. Although he had the make, model, and plate number of the car that was following him, the DMV records turned up nothing.

Working on the assumption that Compton was creating something super secret when he died, Hodgins and Wells test a bunch of foods from his laboratory. Their favorite is Hot Bacon, which they discover is a personal lubricant. A search of Compton's email shows threats from Raymond McCants, a sex toy distributor, who was upset because of Compton's delays in getting him the bacon lube.  Booth questions McCants, but he didn't do it.

Daisy and Wells finally figure out cause of death, based on a puncture wound on the clavicle suggesting perimortem sharp force trauma. The attack came at a downward angle, severing the subclavian artery. Wells checks the slashed tire from Compton's car against the injury to his body.  The tire was slashed by a Japanese garden knife.  Angela traces two deposits from Compton to Evelyn Cheevers, an environmentalist who admits to having slashed his tires but denies having killed him.  They were on the same side, she argues, and Compton was going to quit his job as soon as he exposed someone on the inside.  The puncture wound, Daisy and Wells find, had a hole along the side, much like the needles that anesthesiologists use.  Brennan, however, reasons that it was an injector used to marinate meat.  The marinade injector was designed by Bloom and Compton. In Angela's re-creation of Compton's death, the subclavian artery would have spurted blood all over the killer.  Meanwhile, Brennan realizes that one bone on the table is not Compton's -- it is a horse bone. She reasons that if Compton knew the company was using horse meat, it might be a PR disaster. This leads Booth and Brennan to question Gifford, Tryon's CEO, again.  He denies killing Compton, but Brennan has a warrant to search his hair and, when she shines a black light on it, she sees blood fluoresce.

Ratings
Forensic Mystery - C. The mystery was a wee bit overwrought. Too many suspects, too many teenagers recreating Soylent Green.

Drama - C-. Eh, the mystery was just ok.  Points off for the silly Brennan-in-a-bar plot line, which really was not that interesting or funny.

Well, this review is super late.  The new Friday date makes it difficult for me to review the show, since weekends are utter chaos at my house.  No new episode next week, due to Thanksgiving.

Kristina Killgrove said…
Oh, and did they ever explain why Compton had a fractured hand? Whom did he punch two weeks prior?
26 November, 2013 10:35

Gustavo Rodrigues said…
"Hodgins mentions that Daisy is "one of us." What does that mean? Why isn't Wells? Daisy doesn't have her PhD yet, does she?"

Unknown said…
Regarding your comment about the blood being found on the murderer's hair, I believe that it is possible. I get lost in the time frame of these episodes, but I assume if he only had a few days that it is entirely possible that the blood stained his hair enough to be detectable under Brennan's pocket light. I love these reviews...just stumbled upon your blog while researching if anything like this had ever happened in real life before.
30 November, 2013 11:01