And I'm back for a ninth season of Bones.  It seems kinda weird reviewing a fake show about crime and death in D.C. in light of today's very real, horrific shooting at the Naval Yard, but I suppose I'll press on. I've got my near-beer in hand, so here goes...


The Secrets in the Proposal

Episode Summary
Season 8 ended on the sort-of cliffhanger of the Booth and Brennan relationship -- Brennan proposes to Booth, only to have Pelant threaten (Booth) that he will kill a bunch of innocent people if they go through with it.  Booth backs out, and Brennan is confused.  The premiere picks up in real time, three months later, as Booth and Brennan have been having a rough time.  Booth confesses this -- and the real reason he broke off the engagement -- to his friend/former priest/bartender, Aldo Clemens. 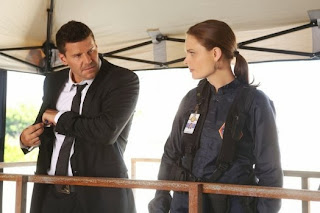 A call comes in about a body at the Lightfoot Hotel, discovered in the air conditioner's giant heat pump. Brennan identifies the right shoulder from fragments of a proximal humerus and the supraspinous fossa of the scapula.

Booth talks to the hotel manager, Mr. Gough, who admits there is no security footage because it's the kind of hotel that caters to illicit sexual encounters.  Gough finds the room of the person who didn't check out, although he was given an assumed name.  Brennan notices the smell of vodka on the drapes -- which look out directly over the A/C heat pump -- and finds traces of blood with a black light.  They take the whole heat pump back to the Jeffersonian.

In the lab, Hodgins finds pieces of a cell phone and wristwatch, while Daisy finds a fragment of skull containing the inner ear -- and an artificial stapes.  The serial number on the implant gives them the name Jonas Sidell, an accountant at the State Department working on understanding European traffic patterns, according to his boss, Ted Norman.  Angela discovers from Sidell's cell phone records that someone from the Transportation Accountancy Office texted him 22 times on the day of his death.  She calls the number back and gets Lily Thorn, the receptionist.  Booth brings her in to the FBI for questioning.  Even though her mother, a hot-shot lawyer, is with her, Lily insists she did not sleep with Sidell and did not kill him either.

Back at the Jeffersonian, Daisy and Hodgins rewire the fan of the heat pump to blow the remaining bits of Sidell out, so they can look for cause of death.  Brennan and Daisy reconstruct the skull from a ton of bitty pieces and note two blunt traumas to the left and right temporoparietals, which makes sense with the height of the blood spatter at the hotel room.  They also notice healed butterfly fractures to the ventral aspect of the ribs, probably the result of a shockwave from a bomb (which also explains the prosthetic stapes needed to fix Sidell's otosclerosis).  Angela reconstructs the last thing that Sidell's printer spit out using laundry detergent instead of ink at Hodgins' suggestion -- it is a photograph of a man and a woman in bed at the Lightfoot.

Meanwhile, Booth and Sweets go back to Sidell's apartment and find it completely cleaned and nearly stripped.  Sweets gets a roundhouse kick to the stomach from Freddie Prinze, Jr., and Booth chases after him, only to realize it's his old Army buddy, Danny Beck, now with the CIA.  Sidell was also CIA, with the State Department accountant job as a cover.  Booth then brings in Heinrich Gloeckner, a German businessman in town to deal with a consulting contract regarding pumps and dams, his company's specialty.  He was shown the printed photo of himself having sex by Sidell (going by the name John), who was working with Lily (going by the name Melodie) to blackmail Gloeckner.  But Gloeckner left before Sidell was killed. In fact, it seems that Sidell's CIA work had nothing to do with his murder.

Saroyan examines a piece of Sidell's flesh that had a bandaid attached.  It was a basic cut, but Brennan identifies the piece as from his jaw, which squares with a bone bruise he had on his mandible, but notes that it happened several hours before his death.  Magic particulates in the wound are from rose oil, which is found on high-end leather goods.  Booth fingers Lily's mother for this, as she spotted Lily at the Lightfoot and assumed Lily was working as a call girl. Marianne Thorn admits to hitting Sidell with her briefcase but denies having killed him.

The Jeffersonian squints finally figure out the implement used to kill Jonas Sidell: something long but flexible.  Booth remembers first meeting Ted Norman, who denied that Lily had anything to do with Sidell's death and who had a very nice bicycle with a flexible lock.  Norman immediately admits to killing Sidell.  He thought that Sidell was using his position to unduly influence Lily into the sting/blackmail operation they had going on.  He confronted Sidell and ended up killing him in a fit of passion, while trying to protect Lily's honor or reputation.

Freddie Prinze comes back and tells Booth he could come work for the CIA if he wanted to.  Pelant comes back in the form of an above-range FM radio and notices Brennan put her trust in Booth.  They are happy again, which means Pelant is not.