This week at Forbes: Castration consternation and an astonishing amputation 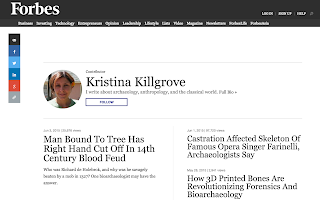 On offer this week are two posts that have both done pretty well in terms of reader interest:


Sparse posting this past week because I was on vacation for most of it.  Next week, look forward to a pre-Scythian burial, a meta-Bones post, and probably one more article.  Then I want to get back to some Roman stuff as I work more intensely on my forthcoming pop-sci book on Roman bioarchaeology.