The Woman in the Whirlpool

Episode Summary
A baptism in a local river comes up with a dead body. At the scene, the Jeffersonian team speculates that someone tossed the body in upstream. Unusual sculpting of the bones suggests the body, following defleshing, was stuck in some sort of natural whirlpool causing the skull in particular to get sanded down. Jessica estimates based on the small brow ridges and sharp upper orbital borders that the person was female, and her pubic symphyses suggest early 50s. Her left arm is missing, and Hodgins employs an underwater robot to find it, then has to go after the mired robot to find the arm on his own.

Back at the Jeffersonian, the team finds that the bone is badly abraded throughout the skeleton from postmortem factors. Based on the life cycle of the aquatic caddisfly larvae, Hodgins estimates time-since-death of less than four days. Hodgins also notices the victim's shirt and the absence of something, namely a monogram, so he has Angela reconstruct it: Thompson Hardware, Leslie. Saroyan finds evidence of heavy metal poisoning in Leslie's tox screen, but with no metaphyseal bands on the long bones, Jessica and Brennan think she was poisoned over a long period of time.

Aubrey calls Ted Thompson, the hardware store owner, in for questioning.  Ted says he last saw Leslie on Friday, that everyone liked her, but that she had a troubled relationship with her college-age daughter Courtney. The daughter did not report her mom missing because she had just gotten back from college. Her mother was not particularly active in her life, though, as she lived only for collecting cookie jars. The carcinogenic glaze on the old jars explains the heavy metal poisoning, but not the laceration to Leslie's right hand, which has rust in it. 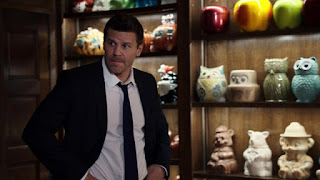 Leslie was active in the cookie jar auction community, shelling out for good internet so she could win auctions by milliseconds. Just days before her death, she posted nasty stuff online about Cheryl McMichaels, another collector/seller. Aubrey and Booth head over to Cheryl's house, where she's throwing out rusty metal items. They confront her about Leslie, but Cheryl insists they were friends and she sold Leslie a lot of jars. The most recent jar she promised to sell Leslie was scooped up by someone who wanted it so badly he was willing to pay a lot more, so Leslie was upset.

Jessica and Brennan get to work on determining cause of death.  They notice an injury to the frontal and parietal bones that seems like a well-healed glancing gunshot wound. A concomitant injury to Leslie's prefrontal cortex during the incident that happened about 20 years ago may be the reason for her obsession with collecting cookie jars. Brennan sections the skull to take a look at the endocranial surface for evidence of blunt force trauma. She finds two hits, with radiating and linear fractures preserved, which is useful because the ectocranial surface was sanded down.  Mapping the fractures, Brennan and Jessica find that the injuries were from two separate blows, one perimortem and one postmortem, created with a heavy, cylindrical object. Saroyan also finds fiberglass in Leslie's lungs, suggesting she spent a lot of time in her attic.

Aubrey and Jessica go to Leslie's house to check out the attic. They find blood on a rusty nail and think that may have been the crime scene. They also find one Mr. Simon, who had snuck into Leslie's house to retrieve a Babe Ruth cookie jar but had gotten trapped there when Courtney came home. He is the one who scooped it from Leslie, paying Cheryl a lot of money. But one day he came home and found it missing; he suspected Leslie and came to steal it back. The DC police confirm Simon's story, as he reported the initial break-in and missing cookie jar. But Angela wonders why Leslie's entire cookie jar collection was listed for sale online, only to be pulled a day later. Courtney owns up to having posted the collection while her mother was out of town, but she took it down when she realized it was time to move on.

Brennan and Jessica find a small, perimortem nick on Leslie's clavicle that they think is connected to the damage to the cranial vault. A diagonal blow from the frontal to the clavicle could have caused all the injuries and sliced through the subclavian artery, causing her to bleed to death. Jessica finds a shard of green glass caught in the clavicle wound, and Hodgins notes that it's pressure-ware glass, the kind found in champagne bottles. He remembers seeing a bottle in the water when he retrieved Leslie's arm.  Using aerosolized gold, he pulls off a fingerprint: Ted Thompson.

Ted confesses to the murder. He and Leslie were sort of a couple, but she used him to break into Simon's house and get the Babe Ruth cookie jar. A few days later, he brought over some champagne, but Leslie ignored him and concentrated on cleaning her jars. He got mad and swung the bottle at the jar she was holding, but she parried and the glass ended up cutting her throat.


Ratings
Forensic Mystery - C. Is it just me, or did this episode have far fewer people-of-interest/red herrings than normal?

Forensic Solution - B-. Most of it seemed pretty reasonable.  Positive ID was not touched on, though, since her name tag was found.

Drama - C. The case-of-the-week was kind of bland, with the writers pouring their efforts into the Booth and Brennan drama. It's just that the realities of Gamblers Anonymous aren't that interesting.