Skip to main content
Posted by Kristina Killgrove May 15, 2015 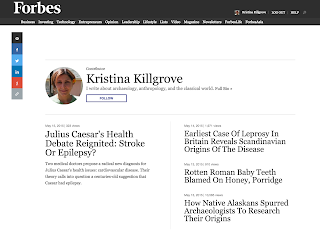 Rather than put up a post every time one of my pieces comes out at Forbes, I have decided to collect them at all the end of the week.  Here's what was on offer from May 11 through May 15:


What's can you expect next week?  I'm working on pieces on Roman dentistry, Bolivian death rituals, and the origins of obesity.  And I'm thinking the week after that, I might do some technology-related posts, with perhaps 3D printing in bioarchaeology/forensics and archaeo-gaming.

As always, if you have ideas for a piece or want me to feature your latest stuff, don't hesitate to email me!