Skip to main content
Posted by Kristina Killgrove May 22, 2015 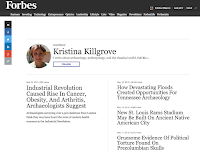 I'm gonna try to dial it back next week, since I have a deadline for a contributed chapter based on my actual research I need to write.  But it's hard, because blogging is way more fun.