Skip to main content
Posted by Kristina Killgrove May 20, 2015

The Murder in the Middle East
Episode Summary
While Booth is on the phone placing a bet with a bookie on a baseball game, Vaziri is abducted in Iran while on the phone with Saroyan. The phone connection remains open long enough for Angela and Hodgins to help figure out where he is: in a defunct center for plastic surgery.

Vaziri quickly meets his captor: a member of the Iranian parliament named Magid Namazi.  Vaziri is asked to identify as much as possible from the decomposing body lying on the table in front of him, and he says that the victim is male, 25-30 based on cranial suture closure, with slightly worn dentition indicative of being raised in an urban environment. The body was scavenged by mid-size carnivores, but he sees evidence of macrognathia, a genetic condition that Namazi also exhibits. Vaziri reasons that the victim is Namazi's son. Darius Namazi was 25 years old, and his official cause of death, his father notes, was a broken neck from a fall down the stairs. He doesn't believe this, though, and has kidnapped Vaziri to help him work outside the law to find out what really happened. 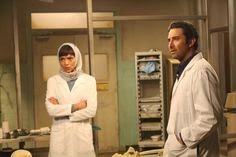 Booth calls in a favor with a friend at the CIA and gets expedited visas for himself and Saroyan to head to Iran to help Vaziri.  They apparently go through some sort of time portal, because they arrive just as Vaziri is starting an autopsy. What Vaziri's been doing for the last, what?, 48 hours at least is anyone's guess. Booth and Saroyan offer to help solve the murder if they can get a satellite feed to the Jeffersonian, and Namazi agrees, reluctantly at first.

Based on lividity, Saroyan thinks that the body was in the house four or five days before being discovered. There are gnaw marks from rats and a second carnivore. Through the video feed, Brennan sees multiple impact wounds bilaterally to the radii and ulnae, as well as subperiosteal bone bruising consistent with a fall down the stairs. Saroyan's test of Darius' throat tissue confirms the government's report that he had been drinking alcohol, which is forbidden. Fracturing to the left temporal bone reveals blunt force trauma, but incisive edges along the fracture lines mean Darius may have been hit in the head before tumbling down the stairs.

Darius' cousin and Namazi's nephew, Officer Sanjar Zamani, helps out with the investigation. He provides Booth with photos of the scene, including a doorknob that led into Darius' home office.  It was curiously wiped clean, leading Booth to suspect the killer wanted something in the office. Booth and Namazi visit Darius' boss, Omid Turan, the head of a major bank, who says Darius was worried about a contractor whose loan he denied.  Booth and Zamani question the contractor, who says he heard Darius arguing and saw a woman with blonde hair leave in a rage. Traces of vaginal fluid on Darius' underwear and traces of blonde hair on his clothing lead Booth to believe the woman was Darius' girlfriend. Hodgins identifies the second set of gnaw marks as those of a weiner dog. Because dogs are considered unclean in Iran, they would have needed a passport if they came in with the foreign woman. This information lets Booth easily track her down: Oksana Kozlov, a Russian national and oil company executive who was in fact sleeping with Darius. She admits to fighting with Darius, but says she left him only to return on Monday and find him dead, with her dogs eating his remains. Namazi wants the investigation shut down because he's learned his son was drinking and was engaging in premarital sex, both of which bring shame to the family.  But Booth and the Jeffersonian team convince him to let them continue.

Someone manages to quickly 3D scan Darius' bones and send them to Angela, who has a magical printer that can spit out an entire, full-size human skeleton in an hour. Brennan notices that the blunt force trauma to Darius' skeleton includes half a dozen strikes over his whole body and looks like it was made by a V-shaped instrument, perhaps a metal 2x4 or some other uncommonly shaped item. Brennan then notices a key difference in the trauma: the fracture to the left proximal tibia was the result of a pulled ligament, not like the other mediolateral fractures caused by the stairs. She thinks the body was moved and that Darius' house was not the scene of the murder. The fractures may have been caused by falling against stairs with squared-off edges in a curved trajectory, which doesn't match with Darius' stairs. Rather, he fell on a grand staircase made out of marble or another material harder than wood.

Booth and Angela meanwhile find out that Zamani was the one who took Darius' laptop. He claims that he did not kill his cousin.  Rather, when he found out Darius was dead, he took the laptop so that Namazi did not find out that Darius was advocating for women's rights and democracy, both of which could get him locked up or killed. Angela searches through the laptop's uploaded contents and realizes that Darius had hard evidence that his boss was embezzling from the bank. Booth reasons that that is what Darius was afraid of, and he remembers the grand staircase at the bank.  Off-screen, I guess Turan the bank head is arrested for Darius' murder, even though there's only circumstantial evidence tying him to it. Meh, must move on to attempt to convince Namazi his religion is wrong and to show Vaziri's brother recovering and asking when he and Saroyan will get married.

Oh, right, and Brennan finds out about Booth's gambling because his bookie comes to the house.  When he gets back from Iran, she is passive aggressive and then catches him in a lie when she finally asks him directly.  She kicks him out when it's clear he was unapologetically lying about falling off the wagon and returning to gambling.


Ratings
Forensic Mystery - B+.  A pretty solid mystery, but there was a lot of detail left out or glossed over that could have made it more compelling.

Forensic Solution - B. Most methods used were fine, if a little imprecise. It's a cool idea to have someone 3D scan an entire skeleton and print it elsewhere, and this is starting to be used in forensics. But in the end not too realistic.

Drama - A-. I didn't think they'd do anything bad to Vaziri, but considering the untimely ends of Nigel-Murray and Sweets, you never know...

Unknown said…
Two comments:
I was surprised how respectful they were to Iran as a country and culture. Not too many cheap shots.

Also after the skeleton was scanned and sent to Angelo she takes the skull image to Brennan and says: " I put this into the computer ..." No she didn't; whoever scanned the bones, put it into the computer, she just moved the scans.
20 May, 2015 18:16

bridget said…
Agree with George that this episode was very respectful of Iranian culture. Cam's little rants about love and the references to Darius being an activist for women's rights were just on the verge of being heavy handed, but not as bad as other episodes. (The author of this episode is the one who penned the neurofibromatosis episode from season 8, which was way more anvilicious).

Emily Deschanel pronouncing ulnar as ul-NARR was a little grating. Technically it's probably not incorrect, I just work in Orthopedics and have never heard anyone pronounce it that way.

I'm guessing the Brennan/Booth drama will be all fixed by the season finale, since Fox didn't decide that Bones was going to be renewed until after the finale was filmed. I would guess that the Bones writers had to plan for the possibility that Fox wouldn't renew them, and they wouldn't end the show with B&B's relationship broken, so somehow Booth will have his gambling addiction totally in remission and B&B will be fixed and live happily ever after within 3 episodes. I'm reserving judgment for how they pull that off. Maybe Angela will beep beep boop boop their relationship with her Angelatron.
26 May, 2015 14:40

Unknown said…
They must've chosen actors who could speak persian very well! Not like that stupid sanjar zamani who Sound like google translate!!!! 😕 and some other obvious mistakes made like the cars' number!!!! One number was written the wrong way! Or the signs on the doors! Or the tags on zamanis' uniform!!! Irans' police write their name on their uniforms not their job!!! And they don't say نيروي پليس ايران!!!they say نيروي انتظامي جمهوري اسلامي ايران!!!and what kind of muslim was that arastoo who prayed and fasted and help poor and also kissed a girl he was not married to?!!!!!😂😂😂 it was a total comedy to me! LOL!!!:)) didn't they think Iranian might watch it?!😂😂😂
09 August, 2015 08:36

Unknown said…
They must've chosen actors who could speak persian very well! Not like that stupid sanjar zamani who Sound like google translate!!!! �� and some other obvious mistakes made like the cars' number!!!! One number was written the wrong way! Or the signs on the doors! Or the tags on zamanis' uniform!!! Irans' police write their name on their uniforms not their job!!! And they don't say نيروي پليس ايران!!!they say نيروي انتظامي جمهوري اسلامي ايران!!!and what kind of muslim was that arastoo who prayed and fasted and help poor and also kissed a girl he was not married to?!!!!!������ it was a total comedy to me! LOL!!!:)) didn't they think Iranian might watch it?!������
09 August, 2015 08:38