Skip to main content
Posted by Kristina Killgrove May 10, 2015

The Verdict in the Victims
Episode Summary
Clearly, the Bones writers listened to me and decided to revisit Episode 13, "The Baker in the Bits," in which an ex-con working in a bakery is accused of being a serial killer. Although that episode was just a month ago in real time, in show time seven months have elapsed. The episode opens on Alex Rockwell, who has apparently been tried and convicted of three murders, sentenced to the death penalty, and had that sentence start to get carried out... again, in the span of seven months. Brennan's testimony helped convict him, and he seems to have given up hope. 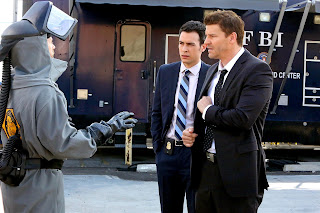 But Brennan is working late at the Jeffersonian, trying to put together evidence that doesn't quite line up.  For instance, xrays taken of Rockwell's arms in prison show increased bone growth around both glenoid fossae and both coracoid processes, suggesting he had torn both rotator cuffs around a decade ago. Brennan explains to Saroyan that this means Rockwell didn't have the upper body strength to kill Barnes, who was apparently the fourth victim in the previous episode who was never named. Barnes suffered blunt force trauma to his left parietal and L1-5 spinous processes from someone swinging a pipe in a downward motion. The DNA found on the knife in Rockwell's car, though, ties him to the murders. Brennan, Booth, and Miss Julian argue with Judge Linda LavinMichael that the evidence from Rockwell's xrays is enough to stay his execution. The judge disagrees, but she does allow Brennan to exhume all four bodies for reanalysis.

At the Jeffersonian, the team gets to work quickly. They scan the remains with Angela's fancy scannermabob and compare what they see now with what is in the case files.  Dr. Fuentes immediately notices a "faint striation" to the medial clavicle (that's actually a ginormous gash) of Father Neighbors that was overlooked before, as well as a nick in the base of Ted Widmer's manubrium caused by a needle. The FBI meanwhile is questioning everyone and their pastor... First another ex-con baker named Salts, who would borrow Rockwell's car to go to Narcotics Anonymous meetings. Then Rockwell's girlfriend, in front of their son Zeke, and a family friend, Pastor Evans. Randy DisherRoger Flender visits Booth to suggest he throw suspicion on him to get Rockwell a stay, but Booth doesn't bite, even though it's clear that the guest star did it, duh.  Instead, they look for personal connections to Barnes, the first victim, and find that just before he died, he spent a lot of money on flowers for the funeral of his driver.

Booth realizes in the middle of the night that the dates of the murders may have relevance; namely that the killer (if it's not Rockwell) will have killed again since only 3-4 months separate each murder. The old iron works factory used to be a monastery in the 1700s, and Angela speculates that the killer was interested in having his "workshop" on holy ground. She searches for abandoned, secluded buildings that fit the description and somehow magically narrows it down to one place, an old water treatment plant, and Booth, Aubrey, and Miss Julian manage to get a warrant from Judge Michael. In the water treatment plant, Hodgins and Saroyan find barrels of ammonia as well as a work table with dried blood stains and a hanging piece of tattooed skin. Based on the condition of the bones, Fuentes puts time of death around three months ago. He also guesses based on the forward protrusion of the anterior mandible and the narrow zygomatic arch that the newest victim was a black female. The bones tell the same story, the same M.O., as the others.  Brennan and Miss Julian present the new evidence to Judge Michael, but she points out that this could be a copycat killing and doesn't exculpate Rockwell, just as the Barnes evidence also did not.

Fuentes notices, however, that there is a deep striation to the new victim's (Tracy Taylor, whose prison tattoo confirmed her ID) anterior C6 vertebra and kerf marks on the right clavicle and upper thorax. Tracy is linked to Salts, because they both went to NA meetings. He was seen arguing with her, but he insisted that it was because Tracy wanted him to start using again and he refused. Angela does some more digging into Barnes' driver, Kyle Martin, who died two weeks before Barnes went missing. He died of a drug overdose, and his mother is Rosamund Flender, Roger's sister.  Brennan thinks that Roger killed Barnes because he was responsible for his nephew's overdose, and that this triggered a string of killings of people who had fallen from grace. Flender has a messiah complex.  This is all circumstantial evidence, however, so the Jeffersonian team revisits the skeletons to figure out more about the implements that were used in the killings.  They reason that, since these are ritualistic, serial killings, the killer likely still has the murder weapons in his possession.  Based on the nicks in the bones, they realize that the killer used a metal compass to inscribe a circle within a downward pointing triangle, which Hodgins recognizes as a masonic symbol for deity.

Booth and Aubrey go to ransack Flender's house, and the FBI team does not find any weapons in the house.  Once Booth gets word from Brennan that they are looking for a masonic compass, he pulls out some bricks from the fireplace and finds both it and a ritual knife identical to the one that I assume was taken into evidence in the Rockwell trial. Brennan insists the compass will have the DNA of five different people on it, but it's not like they have time to test for that or for fingerprints. The judge is convinced, though, and stays the execution.


Ratings
Forensic Mystery - A-. In spite of the fact that Flender clearly did it, and in spite of the fact that four episodes had passed in between, I thought it was a good mystery tonight.  I still don't get why he killed Father Neighbors. But it was nice to see the storyline given more due, especially when it involved Brennan's being wrong (or at least not seeing all the evidence).

Forensic Solution - C. The case hinged on the fact that no one at the Jeffersonian saw a weird puncture wound or a giant gash to the clavicle. Also, those were some wonky demographics on the last victim.

Drama - A-. As above, in spite of the plot holes and forensic weirdness, it was a good plot line.  I'd like to see more of the idea that the Jeffersonian team is fallible, though, especially as it regards trying cases. Put Brennan on the stand!

Anonymous said…
Brennan took the stand in the first season episode "The girl in the stand" and in the episode during which the Gravedigger was convicted.

Thanks for your awesome blog. I regularly check for Bones-updates and then end up reading the more science-focused articles as well.
14 May, 2015 08:58

e said…
She took the stand in "The Girl in the Fridge" where she's pitted against her former professor, who has been hired by the defense to observe and evaluate the lab findings. Initially, it doesn't go well--the jury is bored by her testimony.
14 May, 2015 13:39

Unknown said…
I loved that they used "With the Ink of a Ghost" by Jose Gonzalez when they halt Rockwell's execution and then Booth tells Bones he doesn't believe in the death penalty anymore and offers to make her a snack. Mostly because I just like that song, but that scene was really great and they want together well. It had a great mix of seriousness but just enough of a light touch at the end that keeps it nice and balanced. But anyway good thing Brennan figured it out, otherwise an innocent man would've been put to death.
22 May, 2015 18:57