Welcome back, everyone, to the second half of this season's Bones.  The premiere happened while I was hanging out with real biological anthropologists at this year's American Association of Physical Anthropologists conference, so I didn't have time for my favorite fake anthropologist last Thursday.  I hope to get to the rest of the season's episodes in a timely manner, but I also have a real job so things might slide a little bit.  Without further ado, let's see if I remember how this is done...


The Psychic in the Soup
Episode Summary
A park ranger tasked with cutting down a tree on which lovers carve their initials freaks out when his chainsaw slices through a dead body and blood spurts everywhere.  The tree is taken back to the Jeffersonian, where Brennan retrieves an os coxae from the blood-decomp sludge and estimates the victim was a 30-something female based on the size of the pelvis and the uniformly coarse granularity of the auricular surface. The blunt nature of the anterior aspect of the mandible suggests she was African-American. Scoring and abrasions on the cortical surface of numerous bones reveal that scavengers preyed on the body, and fungal growth gives Hodgins time-of-death of a month prior. The middle of the skull was obliterated by the chainsaw, and Fuentes is tasked with reconstructing it from the tiny shards in the blade of the saw.  Angela quickly IDs the victim from her skull as Justine Simmons, reported missing two weeks prior by her father. 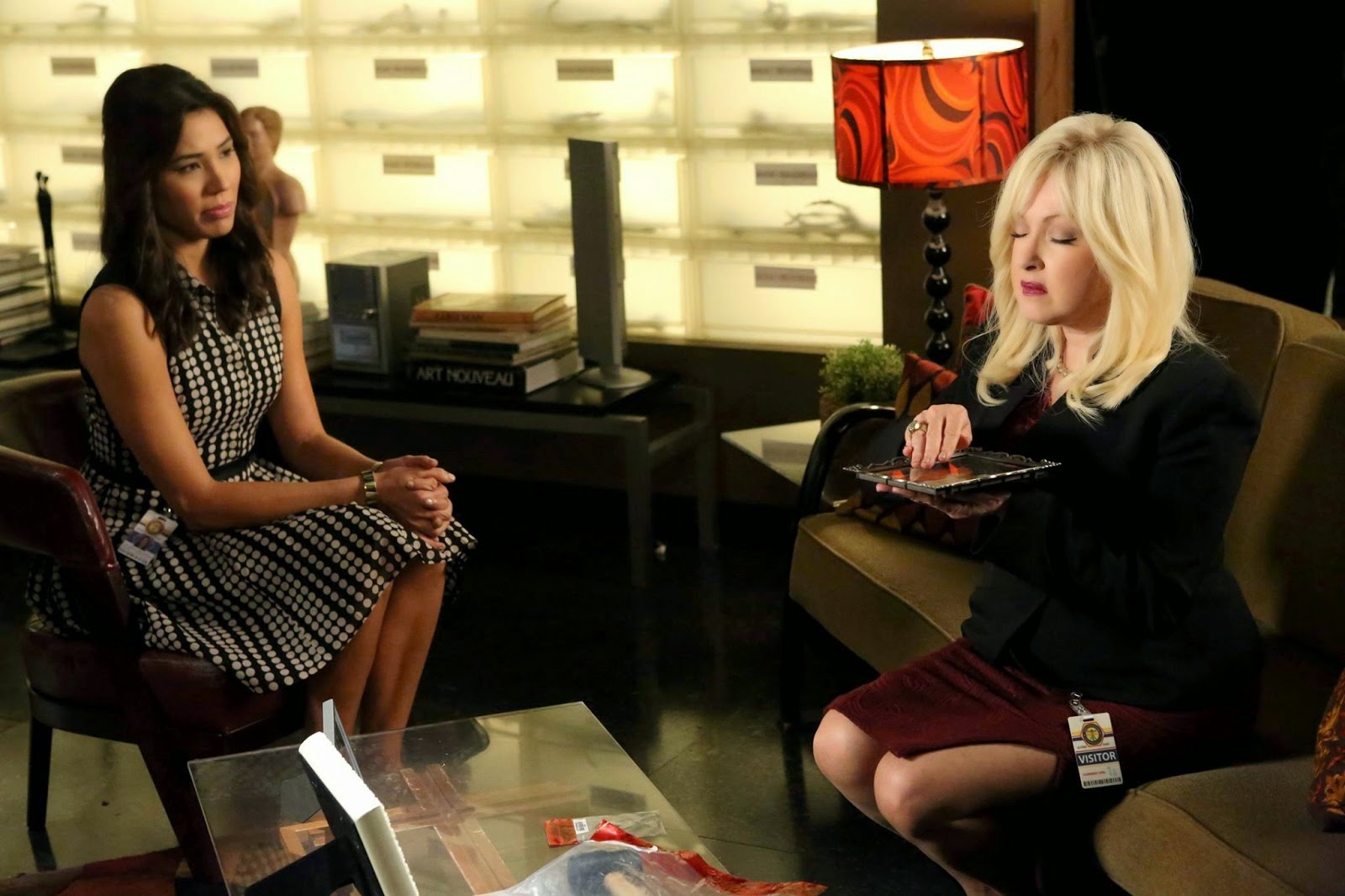 Aubrey brings in Pastor Simmons to the FBI for questioning. He suggests that because Justine caused a car accident that injured her father, he may have wanted retribution.  But the pastor insists he was happy that Justine had started coming back to church and they were starting to reconcile. Their relationship had soured because of her job as a psychic.

Booth and Brennan visit Justine's apartment and are joined by Avalon Harmonia, another psychic.  The landlady shows them in, where they find a broken computer with blood on it and a big envelope full of cash.  Avalon thinks that another psychic, Anthony Taylor, may have been the killer because he and Justine used to be partners.  The landlady confirms she heard them arguing. Aubrey interviews Taylor at the FBI, but it seems he is just a fake psychic and not a killer. He reveals that Justine was using background information on her clients to blackmail them.  Angela does forensics on the computer and finds that it crashed at a specific day and time, which likely gives them time-of-death. Meanwhile, Fuentes notes the Monteggia fracture on the proximal ulna and concomitant dislocation to the radius, along with fractures to the metacarpals, suggesting Justine fought back against someone.

Booth runs the serial numbers on the wad of cash from Justine's apartment and traces the $3,000 in hundreds to a small local bank.  The teller was able to tell him that Alana Jackson took out the money, so Booth and Aubrey go to see her.  Alana reveals that she and Justine were in a relationship, unbeknownst to Alana's husband or Justine's religious father. Meanwhile, Saroyan finds ecchymosis on a piece of scalp that Fuentes matches to the occipital.  He also notices a blunt force injury there, made from a semicircular object that was likely made of something light, like wood.  Aubrey brings the pastor back in to check his cane.  He again denies killing his daughter and lets Aubrey know that he knew for years that Justine was gay and that he has always supported her.  The pastor's cane does not match the reconstructed head and blunt force injury.

From some of the bugs on the body, Hodgins finds windshield wiper fluid, suggesting someone dragged Justine's body onto the hood of a car to put it into the tree.  He also finds grease and adhesive used to install flooring, which leads the team to question the landlady again. The flooring and her mallet tested positive for blood.  The landlady admits to overhearing a conversation Justine was having with someone and getting upset because she was also in love with her.  She confronted Justine and threw her mallet at her head.  Justine fought back, injuring the landlady, but was alive when the landlady left.  Fuentes meanwhile notices a small blunt force injury in the middle of the larger blunt force injury and suspects that Justine was hit again in the same spot. If a subdural hematoma caused by the mallet ruptured, it could easily have killed her.  Within that wound, Hodgins finds bicycle chain grease.

Aubrey and Booth bring Alana Jackson back in, as her daughter's bike chain tested positive for blood.  Alana unfolds the whole story.  Justine came over to break up with her, but wanted a goodbye hug.  Alana did not want that and pushed Justine away.  Justine fell, hitting her head on the bike, and died.  Alana decided to dispose of the body inside the hollow trunk of the tree in which they'd carved their initials.  She is hoping she does not get charged with murder.  Booth thinks the landlady will get manslaughter while Alana may get a plea deal.

All of this happens on what would have been Sweets' 30th birthday.  Booth buys doughnuts as a celebration, and Avalon gets a psychic vision about a thumb drive in Sweets' car.  She and Angela find it, and it has his book on it.  He has turned his profile of Booth and Brennan's professional partnership into a love story.  Christine is excited to hear it, as she has been playing with her imaginary friend Buddy, who wants to eat cake and wants to hear a love story.

Ratings
Forensic Mystery - B-.  A reasonable mystery, but with some really random stuff thrown in (e.g., what was the deal with "Leatherface" at the beginning?) as red herrings.

Drama - C.  The Sweets stuff got tiring.  Fuentes' drama was both too light and too heavyhanded at the same time.  Oh, right, and the case of the week was eh.