So this isn't a typical episode of Bones, of course.  It's some weird fake-40s movie-within-a-movie-within-a-TV-show, starring every single semi-regular character.  Brennan is trying to be a detective and trying to impress her father, the chief of LAPD.  Booth is a jewel thief whom she tracks to Eva Braga's house.  He breaks into Braga's safe but finds only her smoking, dead body.  Brennan doesn't think Booth did it; she partners with him to clear him if he helps her solve the case and prove her worth as a detective.  Brennan asks Hodgins, Professor Actual Factual, to use his palaeontological skills to figure out information about the skeleton in the safe. 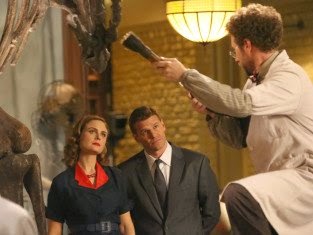 Hodgins and Edison figure out that the person was killed by blunt trauma to the skull before she was put on fire.  They then figure out based on the small shoes and short dress in Braun's closet that the skeletal remains were not hers (they were too tall). Angela helps with a facial reconstruction, and Hodgins figures out Braga was pushed down the stairs and that she was dead a few hours before the dynamite was set.

Aubrey, another jewel thief, has information for Booth but is stabbed in the back, and Booth is framed for his murder.  Meanwhile, Miss Julian, the owner of the Foxy Club, tells Brennan that Booth only stole jewels from people who made money from taking and selling Jewish internees' goods.  Then he gave the money from the sale to his friends who had PTSD from the war.

Brennan and Booth figure out that the murderer is actually Saroyan (the maid).  She stole jewels from Braga, ran off to Rio, met Aubrey there, and came back to LA.  Aubrey figure out she wasn't really Braga, though, and so Saroyan killed Braga and put her in the safe, knowing that Booth would be there to take back the jewels. She also killed Aubrey.  Brennan and Booth confront Saroyan, who takes Brennan with her to the airport to drop her into the ocean.  Booth manages to get into the plane, there's a struggle. Saroyan tries to push Brennan off the plane; she falls out.  Booth flies the plane. Brennan gets to head the division of forensic anthropology.  We never fade back to the 1950s movie stars in the movie, which means the whole opening sequence was pointless.

XL Daiana said…
Still don't get it.
If the bones are larger than Braga's dress and shoes, doesn't it mean it actually isn't Braga? So I thought the remains were from the maid, and Sorayan (who should be the maid) actually was Braga.
Too messed up and confusing.