The Lance to the Heart
Episode Summary
Booth and Brennan are desperate for answers to Sweets' murder but get nowhere on the phone.  At the Jeffersonian, Brennan, Daisy, and Edison examine his remains. Brennan notes a linear fracture to the right femur and Edison points out fractures on the greater cornua of the hyoid as well as crushing injuries to the thyroid cartilage.  The neck trauma makes Brennan think Sweets' killer was military trained. But Sweets' cause of death was an aorta tear as a result of the killer striking him hard enough to break left ribs 3-8. Hodgins analyzes a fibre found on Sweets' body and traces it to a very specific car: a Mercedes designo edition.

Booth and Eyebrows McGee find the car, which had been stolen.  A blood trail is found from the car into the mud.  Booth suspects that the killer sought out higher ground but was injured. They go to the roof of a nearby building and find rats eating the face of a dead Kenneth Emory, who was at Quantico with Eyebrows. Emory left to join the Navy Seals, was accused of assaulting a female cadet, but all charges were mysteriously dropped. When Booth and Eyebrows relate this to FBI head Stark, he gives Booth carte blanche in the investigation. 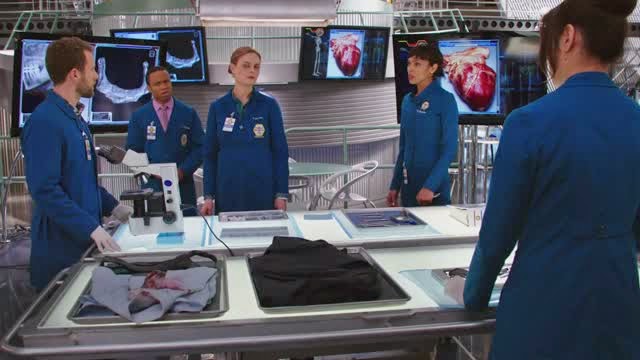 Back at the Jeffersonian, the team is working on Emory's body.  They note avulsion fractures to the right second, third, and fourth proximal phalanges, likely broken by Sweets in their struggle. Sweets' 4th and 5th metacarpal fractures correspond to microfractures on Emory's temporal bone. A tiny nick on Emory's first lumbar vertebra shows that he was stabbed by a small blade, and Edison thinks he was then shot, as a coverup, and bled out.

Meanwhile, Hodgins gets the blood off Sweets' notebook and Angela reconstructs his writing. She also starts looking into connections among the key players in the conspiracy to figure out who was involved and who may have the stack of documents. Miss Julian points out that they can't get another warrant on Sanderson, since he complied with the first one and they have no good cause to get another one. Booth freaks out and buys a crapload of guns, but Brennan threatens to leave him and points out he can't just go kill Sanderson.

At the Jeffersonian, Daisy communes with Sweets' skeleton, noting all the remodeled fractures and other peculiarities of his skeleton: remodeled fracture to the foot, to the left ulna and radius from falling out of a treehouse, extended articular facets on metacarpals from playing the piano.  Brennan looks at the histoimmunological study of Cooper's marrow finally.  She and Edison see a strange tumor-like cell growth that was not the leukemia.  They suspect that Cooper's killer accidentally injected some of his own DNA. Eyebrows helps fill in the person to whom J. Edgar Hoover might have passed down his blackmaily documents: Desmond Wilson, who had a fallout shelter built just before Hoover's files were to be destroyed.  Hodgins and Eyebrows go check out the shelter and find a wire from a wire recorder. They play it with help from Angela and a Jeffersonian artifact, and they hear JFK talking about the Cuban Missile Crisis and coming on to a secretary.

Although Wilson's house was owned by a Sanderson company, Brennan finally fills in the last piece when she notices Durant, as a child, in a photo with Wilson, his step-father.  Wilson must have groomed Durant for years to take over the documents. Brennan and Booth confront Durant so that Booth can be plausibly pissed off; he punches Durant, thereby getting a sample of his DNA.  It matches the DNA found in Cooper's puncture wound from 16 years ago. Although this is enough evidence to try Durant for Cooper's murder, it doesn't solve the problem of the files.  Using Sweets' notes on how the conspiracy was like a religious cult, Booth, Brennan, and Eyebrows reason that the files would be hidden somewhere "holy" -- Hoover's office, which is now a Jeffersonian exhibit.  The files are literally hidden in plain view; no one thought they were real.

So, the conspiracy is solved.  And the gang goes to scatter Sweets' ashes, while singing Harry Nilsson's "Coconut."

Comments
Ratings
Forensic Mystery - B. In spite of all the loose ends and confusing bits, it was an interesting enough mystery, especially since it involved Sweets.

Forensic Solution - B. Everything seemed reasonable enough, except the DNA transfer morphing into a tumor in Cooper.  I am not believing that.

Drama - C. Eh. Even though this was the culmination of several episodes, it didn't feel very high stakes at all.

Jeff Howe said…
I watched this last night again after having seen it a couple years ago. I remember thinking back then that it was quite implausible that this squirrely doctor could be the head of a shadow government conspiracy. My thoughts after last night were the same. I know Sanderson as the powerful industrial leader would have been the obvious choice and the show was using him as a red herring. But even so, it would have made a lot more sense than how they really ended it. And I still can't figure out the importance of J Edgar Hoover's files. The premise had such promise, but the ending was worse than disappointing.
19 September, 2017 11:42