Where did Roman babies poop?

Today in "what has been bugging Kristina for no good reason..." I started thinking about Roman babies (as I am missing mine while in the field) and wondering if the Romans had diapers.  After all, by the Imperial period, they'd invented flush toilets, so why not pinned cloth diapers?  But my internet connection at work is not terribly reliable, and I couldn't wait to get back to the apartment, so I posted the question to Twitter and Facebook.

A slew of classicists responded on Twitter, and Facebook gave me more of an anthropological view -- namely, in many parts of the world, today and in the past, babies simply didn't wear anything. They pooped and peed when and where they needed to.  Not to be ethnocentric or arrogant on the part of the Romans, but considering Imperial Rome was huge and urban, and considering their understanding of toilets, hygiene, and the like, I didn't think mothers (or nurses or slaves; probably not dads, of course) would go for the always-pooping infant.

Here are some of the bits I gleaned from crowdsourcing this question... no definitive answer, but a bunch of directions to go in:

Jane Draycott (@JLDraycott), Roman historian and archaeologist, chimed in with a bunch of tweets:


Caroline Wazer, a PhD student in ancient history at Columbia (@CarolineWazer), found an image of a nursing mother on a Roman sarcophagus: "Here's a nursing mother & baby on a 2nd c sarcophagus at the Louvre. Tunic/diaper combo? pic.twitter.com/C76NdTL6of." 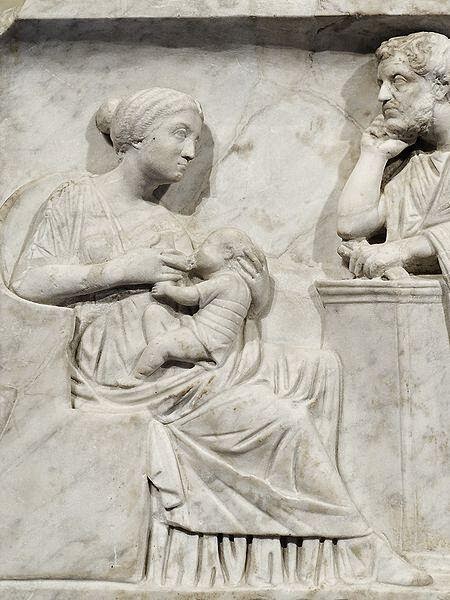 I echo what classicist Liz Gloyn (@LizGloyn) said on Twitter: "Watching @DrKillgrove sourcing information about ancient Roman baby nappies = another reason classics!academic!twitter is brilliant."  But I also wonder what else we don't really know about the Roman world... clearly, we need much more feminist research into classical antiquity.  Asking what Roman babies pooped in is a deceptively simple question, but one that classicists (who tended to be upper class males for the last couple hundred years) and the ancient historians themselves (who tended to be upper class males, of course) haven't seemed to bother with.  What other questions about the lives of babies might we be able to answer?

Anonymous said…
I always wonder about these details of daily life, how did the nitty gritty work? Funny how this mostly seems to be the 'female' part of life.

Loving this style of post too, I really like that you've just posed the question and compiled some resources for further study!
28 June, 2014 06:46

Kamilla said…
I wonder if they might have practiced some form of what is now called natural infant hygiene/ diaper free/ elimination communication? This is the dominant form of potty learning in the world today, so far as I know, and I would think it has quite ancient roots.
06 July, 2014 23:38

Anne Hart writes novels, plays, scripts, poems, stories, articles, non-fiction books, and columns. said…
Interestingly, peoples without toilets using the soil created whip worms that archaeologists can still find evidence of to this day. The whip worms and round worms also adhered to the bare feet of those using the unpaved ground as a place to do their toileting, then tracked the worms and worm eggs into their private baths, getting those worm eggs all over and into their bodies in the water in which they bathed. Flush toilets were one of the greatest inventions for hygiene, depending upon where the waste water went.