The Woman in White
Episode Summary
Brennan, Booth, and much of the Jeffersonian team are at the church for the wedding rehearsal.  A call comes in about a murder, and everyone's cell phone goes off.  At the Jeffersonian, the team immediately notes that the body is that of a woman in her mid-30s with multiple stab wounds to the chest. Her clothing suggests she died in the 1970s; a cicada caught in her sleeve tells Hodgins that she died in 1979. An ID with the body says she is Nancy Amelin, born in 1943, and she worked in the manuscript division of the Library of Congress. 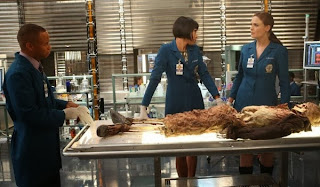 Booth finds out that the body was found in a spot that used to be a part of Adams University, where there was grad student housing and faculty office space. Hodgins finds that the stab wounds contained traces of steel but also a huge number of foliage fragments and particulates from various parts of the East Coast. A splinter of wood is found in one of the fractures, and Hodgins identifies it as cocobolo. Angela goes through the woman's documents from her purse and finds a protective sleeve but can't figure out what document was in it.  Fortuitously, she finds a photocopy of the document in the woman's wallet.

Saroyan calls in Dr. Edison to help with the case so Brennan doesn't get bogged down before her wedding. He notes that the sheer number of microfractures to the bones will take him and Dr. Brennan two days to catalogue.  So Saroyan suggests calling in all the interns... initially, to just look like they're working, but ultimately to do the work.  Brennan assigns Wells to the task of analyzing the document found with the victim, so that she and Angela can work on wedding prep (which seems to involve mani-pedis and hair styling). The interns find bruising to the sacrum and coccyx, a microfracture of the left olecranon, and multiple microfractures to the calcanei. The majority of the microfractures are confined to the heels and feet as well as the ischial tuberosities, which suggests to Wells that the victim was dragged down the stairs. Based on the number and patterning of the injuries, he guesses 72 stairs and 8 landings, which means she was killed on the 5th floor. Fortunately, there was only one building at Adams University with five floors. Further, Wells' documentary research leads him to conclude that the document in the protective sleeve was a poem by Emily Dickinson suggesting she had a lover. This document runs counter to the research of Professor Janet McCann, a Dickinson scholar, who was communicating with the victim.  Further, McCann's book jacket bio says she's an avid hiker, particularly along the Appalachian Trail.  The murder weapon was her trekking pole, which was made of cocobolo wood and tipped with steel.  This explains the flora and particulates in the victim's wounds.  McCann had a stroke two years ago, though, and therefore cannot stand trial for the murder.

In B&B wedding news, the church burns down (possibly because of Booth?) and Brennan can't find another one that will accommodate their wedding.  Angela ends up setting it up on the lawn of the Jeffersonian, and Booth's ex-priest bartender friend officiates while Cyndi Lauper sings a very credible version of "At Last." I'm glad that the government shut-down is over, or else Booth and Brennan would have had no place to get married, what with the Jeffersonian being closed and all its employees furloughed and all...

Ratings
Forensic Mystery - D. That was the quickest solved case-of-the-week ever. I guess when you don't have to interview any suspects or discuss the forensic context of the skeleton, you save enough time to have a TV wedding.

Forensic Solution - D+. No age-at-death or sex from the remains. Presumably a positive ID was made somehow other than by the ID card the victim was carrying.

Drama - C-. The only drama was in the location of the wedding, and even that was pretty boring and predictable. There was way, way too much dialogue consisting of empty platitudes in this episode.  Blah.

Kris said…
Giant rollers are for those of us with fine, limp hair. Helps give some body by, ideally, making the hair stick out at the root rather than lay flat against the head.
22 October, 2013 18:55

Rebecka said…
Christine was apparently supposed to be there, and they tried really hard. But the twins that play her were super unhappy and the child wranglers could get it to work (and who wants hots of a wailing infant at the tv wedding that is supposed to be perfect?)
23 October, 2013 16:12

Anonymous said…
And another weird thing is that Vaziri is a Muslim who prays in previous episodes.... But at the wedding he drinks champagne.
28 October, 2013 19:10

Kate said…
Oh, but why not mention the laugh-out-loud hilarity of the "evidence" that made them so sure the letter was by Dickenson - evidence that could have led to nearly any literate woman in the entire nineteenth century - no way in hell was that specific to Dickenson (not that an ID of such a document couldn't be done, but not on the kind of evidence they explained).

Not to mention the whole notion of a lit prof *murdering* someone over a piece of evidence proving her research was wrong. That actually pissed me off (as a humanist myself) -- just like scientists, we actually welcome new evidence, and no one's career would be harmed by something like that. On the contrary, she'd be likely to get a fat book contract from a major press to revise in light of the amazing new evidence. But they don't make any effort to point out that only a wildly unhinged academic would behave in a way completely contrary to academic values as well as to morality -- oh no, we just assume TV audiences believe academics are immoral morons! The only reason I ever started watching this now idiotic show is because they did a pretty decent job of portraying academics in the beginning. Very disappointing.
29 October, 2013 10:56