The Doom in the Gloom
Episode Summary
A woman wakes up, groggy from having been injured in the back of her neck.  She grabs her gun and heads for the door.  When she opens it, a fireball engulfs her, mostly destroying her body.

The Jeffersonian team and the FBI are called out to the scene.  Judging by the oval shape of the obturator foramen, the victim was female, and the granular appearance of her pubic face suggests she was in her mid-30s.  Her head is found nearby in a toilet, as she was decapitated when thrown against a shelf by the blast.

After taking the body to the Jeffersonian, the team examines it and finds a bolo bullet in the victim's chest cavity.  Her distal phalanges were burned beyond recovery, and her radius, ulna, thorax, and anterior aspect of her lower extremities are all calcined from the fire.  Her back, shoulders, and buttocks are less burned, as indicated by the difference in color.  The house and land were owned by Deanna Barbieri, a single, ex-Marine who was a part of a survivalist group.  Medical records from the VA include a chest xray, and the size, shape, and position of the transverse processes of the vertebrae match the remains at the Jeffersonian, giving them a positive ID.  From the angle of the entry wound of the gunshot, the slugs would have transected the inferior vena cava, killing her; also at play is the decapitation, although it's unclear if that was prior to or after death.  Deanna had a history of misconduct with the military, and was most recently kicked out for fighting with fellow Marine Carlene Blaney, who was her ex-lover.

Hodgins swabs the chest wound and finds remnants of phosphorous and magnesium, which could have been used to make dragon's breath, a 50-foot flame that lasts for three seconds.  The shot that killed her also started the fire.  Meanwhile, Daisy finds evidence on the distal femur of a remodelled injury with striations from splintering.  Brennan diagnoses it as a cannonball injury; Angela's statistical modelling and Hodgins' reconstruction confirm that that weapon could indeed have caused the injury to Deanna's leg.  Brennan and Daisy also note pitting to the maxilla, which laughably Brennan calls caries sicca, resulting from gummatous lesions of tertiary syphilis, even though it looks nothing like caries sicca.  They diagnose Deanna with a venereal disease, when the bones instead suggest nothing more impressive than scurvy, which a survivalist could easily have gotten without proper food for an extended period of time.  Anyway...

Booth and Sweets track down Dr. Apocalypse, a trained medical doctor who quit to lead a group of survivalists.  He has a YouTube video showing people how to make their own ammo, including a Civil War-style cannonball maker, and has a deed on land in Wise County, Virginia, on which he's built a bunker.  Booth and the FBI team blast open the bunker, revealing a goat, a chicken, and four people -- Dr. Apocalypse, his wife Dolores, mechanical engineer Milo Mills, and retired minister Dennis Bukovac.  Dr. Apocalypse admits that Deanna was part of their group and that he treated her for the cannonball injury, which was accidental, in a bit to ensure they were able to survive basic trauma on their own.  He also gave himself a shot for syphilis, as he was sleeping with Deanna.

At the Jeffersonian, Angela digitally reconstructs objects that burned in the fire.  This leads Hodgins to realize that, based on the melting points of the elements in a screwdriver and a shell casing, the fire must have started at 8:30, not 7, which means that no one in the bunker could have killed Deanna.  However, Daisy notes a puncture wound to Deanna's clavicle, and Saroyan finds the likely cause: a 12-gauge needle, the kind used by vets, filled with benzodiazepine.  Hodgins and Angela think that one of the survivalists must have worked out a way to sneak out of and into the bunker, but all their models fail to support this hypothesis.

Booth looks over the evidence from Deanna's house and finds the elements necessary to have booby-trapped her door, thereby ensuring the killer had time to escape and maintain an alibi.  Milo, the mechanical engineer, would have the skill necessary to pull this off, but he had taught Dolores how to create traps like this, and she had taught him how to deal with animals.  Booth hauls Dolores into the FBI for questioning; per Milo, she doesn't ever wash, so they might find residue from the firebomb on her hands.  Brennan fails to find this and wants to take clippings of her fingernails, for which they don't have a warrant.  Instead, she strikes a flint near Dolores' fingernails, and they catch on fire, indicating the presence of phosphorous.  Dolores confesses; she didn't like Deanna, who was aggressive, overbearing, and dishonest, and didn't want to spend the rest of her life with her.  Angela reconstructs one last item from the fire at Deanna's -- a letter she wrote to Carlene, which gives her peace. 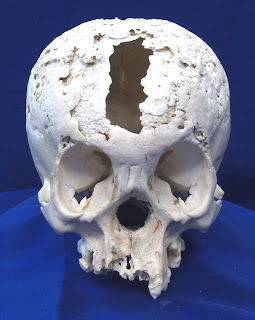 Ratings
Forensic Mystery - B.  This was a perfectly reasonable mystery, albeit mostly focused on the whodunit side, than the whoisit side.

Forensic Solution - B-.  Oh, loads of points off for the ridiculous diagnosis of syphilis and the lack of consultation of dental records.

Drama - C.  No one was in particular danger.  Sweets got a new place (with roommates predictably named Chrissy and Janet).  Daisy and Carlene got closure.  Hodgins swooned over Angela's skills to encourage her because she's... planning to leave the Jeffersonian? Wait, what ever happened with that plot line?

Maybe next week will be more interesting.  And less fake-VD-y.

Anonymous said…
Sorry to be a nag, but I want to put out some of my own info as well.


-Is a bolo bullet really a thing?

Yes. Sorta. Not really anymore, more comparable to Naval Grapeshot back in the day of cannon. But it's not really "worth it" at all anymore. There's much more efficient ways of shooting someone with more than one bullet.
20 March, 2013 04:47

Anonymous said…
A bolo bullet is a real thing, and a lot more current than naval canons. A couple years ago it was announced they were making a 2-in-1 shot and I don't know much about that, but last year there were videos of the damage that could be done with a 3-in-1 design and it seemed to do a fair amount of damage, even if it was a few bucks a round.
20 March, 2013 12:44

Rebecka said…
But she didn't even look at the pubic symphyses! What she did was feel the inside of the right pubis and comment on the "granular appearance"… of a charred skeleton that looked pretty "granular" all over. The pelvis was articulated (do you say that about a pelvis?), so wouldn't the symphyses face each other making it impossible to observe anything about their appearance?

I would totally have gotten it if she said it when having a clean disarticulated skeleton on her table but articulated, charred and in the field? Nah.
22 March, 2013 12:25

Unknown said…
A continuous displacement of free electrons, or electricity, in the wire was then observed. The work of Faraday and Henry inspired other scientists and accelerated discoveries. In 1882, Croatian engineer Nikola Tesla perfected the alternator, a device capable, as its names indicates, of producing an electrical current that alternates constantly back and forth on a messenger wire. The same year, French chemist Lucien Gaulard presented a transformer capable of changing the voltage of alternating current. These two inventions greatly facilitated the large-scale production and transportation of electrical energy over long distances
Visit the website and get more information => www.inventhistory.com
hydro electric