The Fact in the Fiction
Episode Summary
A former investment banker-turned-farmer stumbles across a dead body while aerating his field to grow kale.  The bones are heavily scavenged by coyotes, based on the three-cornered puncture marks, but presence of Nicrophorous americanus and its larvae give Hodgins time of death of 5 days ago.  Flattened anterior and posterior aspects of the femoral neck lead Brennan to suggest the victim was an Hispanic male. 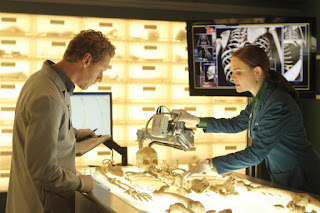 At the diner, Brennan is confronted by a young man with a head wound, ranting about the thing he has for her in his bag.  Booth whips out his gun, the guy slides the bag across the floor, and a bloody head wrapped in plastic rolls out across the diner floor.  The guy is not a crazy, though, but the new intern, Dr. Wells, who tracked the coyotes to a den 6 miles away and retrieved the skull of the victim.  Wells is quirky, with a PhD in physics, master's degrees in astronomy and wildlife ecology, and is two credits shy of a master's in forensic anthropology; he has also passed the bar.  Brennan complains that wrapping the skull in plastic could have compromised the remains because of condensation, but Wells had already calculated how much time he had before condensation started affecting the remains.  Upon examination, Wells finds no cutmarks to the gonial angle of the mandible, the underside of the chin, or the cervical vertebrae, which means the head was most likely removed postmortem by scavengers.  They note a strange glow emanating from the inferior nasal conchae.

The glow came from glow-in-the-dark paint, which they traced to the still-unnamed victim's brother's body shop.  Alex Garcia identifies his brother, Benji, from... a facial reconstruction?  He may also have reported him missing?  Their mom is dead and their dad took off years ago; Benji broke up with his girlfriend Courtney around the time of his death.  Courtney denies killing Benji, as she loved him, but he only had eyes for his truck, a tricked-out '59 El Camino like the one his dad used to own.  Benji was smart, Courtney mentions, interested in time travel.  Courtney's alibi checks out, though.  Wells meanwhile finds a perimortem 20-mm contusion to Benji's occipital bone and slight scoliosis of the spine.  There is also an incomplete perimortem fracture of the right anterolateral tibia and fibula.

Angela finds that Benji was talking a great deal with Professor Scott Hunter, including using his login information on the Collingdale University server, and had numerous files on his computer about time travel.  Booth and Brennan go talk to Hunter, who has a prior record of electrocuting a student, which is how he lost his job at the university.  Hunter denies killing Benji, accidentally or otherwise, but Brennan finds plenty of equipment in his home lab that could have electrocuted Benji.  They bring some of this equipment back to the Jeffersonian so that Hodgins can run some experiments and see if the current could have caused the fracturing to the anterior and posterior aspects of sternal ribs 9 and 10 and the anterior aspects of vertebral ribs 11 and 12.  After some goo splats Hodgins and Wells, they realize that electrocution was not what killed Benji.

Booth and Brennan go in search of more clues using Benji's phone records and tracking of his ATM withdrawals.  He also borrowed money from Hunter on the night he was killed.  Hodgins' spectroscopic analysis of the soil found on Benji's body points to serpentine soil, the kind found at a strawberry farm in Rockville.  B&B search the area and find a barn with Benji's car in it.  They also find another dead body -- rugged nuchal area on the cranium and convoluted sutures suggest Hispanic male, and the sternal rib ends suggest mid to late 40s.  Booth thinks it's amazing that the body is basically the same as Benji's, only 20 years older, because of course there are no other Hispanic males in D.C.

The second victim suffered a single gunshot wound to the inferior right thoracic region.  This is also what Hodgins and Wells conclude killed Benji, after getting Saroyan to shoot a gelled-up thorax.  Judging by skin marbling and slippage, Saroyan estimates that the second victim was also killed 6 days ago.  This man also has a roughly 20-mm contusion, but to the frontal bone.  Brennan and Wells find a comminuted fracture to the right patella of the second victim with evidence of remodelling, as well as slight scoliosis.  Wells thinks this could be evidence that Benji travelled through time, but Saroyan presents the DNA results: the man was Felix Garcia, Benji's father.  Injuries to the two bodies suggest that Benji was standing in front of Felix, their heads knocked together, and they were shot by the same bullet.

Alex Garcia admits that he told Benji his father was dead, since he was a deadbeat and a junkie.  Booth finds one of Felix's drug dealers, who happens to be Sidney Giran, a man who works at Alex's body shop.  Sidney denies killing Felix, but he did inflict the kneecap damage with his tactical baton, as striations on the bone show, because Felix owed him money for heroin.  The perimortem injury to Benji's leg, though, was made with more force and at a 45-degree angle.  Sweets and Booth return to the body shop to question Alex, who is working on a car with scissor doors.  Booth thinks that Alex was upset that Benji found out his father was alive and killed them.  Alex admits the whole thing: Felix returned and asked them for money.  Benji was going to give Felix his entire college savings, so Alex followed them to the barn at the strawberry farm.  He shot at Felix, but Benji jumped in the way to protect him.  Alex ended up killing them both.

Ratings
Forensic Mystery - B-.  This episode was fine.  The mystery was ok; it was pretty obvious that the two victims were related, and that the time-travel thing was a very bad red herring.

Forensic Solution - B-.  Again, a fine episode.  The osteology was reasonable, except for the Hispanic ancestry thing.  The victims were never positively IDed from dental records or DNA (unless Felix was), which was disappointing.  Cause of death was pretty reasonable.

Drama - B-.  Nothing to get too worked up about.  The new intern is obnoxious.  Booth wants to mine meteors.  Everyone discussed where in time they'd go back to, and Angela and Saroyan would go back to have sex with Angela's ex-husband (because of course?).

Anonymous said…
It is interesting that you have qualms about scientists with degrees in multiple, clearly different fields. 'Homo universalis', once the ideal of the Enlightenment that started of modern science, seems to have become unacceptable and suspect in science lately. Why?
Maybe I am blunt now, but I strongly suspect that the real reason is that these people are perceived as an intellectual threath by scientists who don't have a command of multiple fields.
At multiple times I have felt myself a victim of this negative bias. While I have degrees (MA and PhD) in one field only, fact is that I am scientifically active and peer-published in two clearly different fields of science. At times, I have noted how (archaeological) colleagues (and funding agency committees) appear to find that weird and confusing, and somehow "suspect". I find that attitude weird. Some of us just have multiple interests and are capable of pursuing those at a very high level, and there is nothing wrong with that. It speaks to a versatile mind capable of digesting a broad field of information, of a want to understand the wider world around us (the basic drive of science!) which is good. With a versatile mind you are less likely to fall victim to tunnel vision. Personally, I distrust scientists who have only one narrow research interest. They seem to lack that wider wonder which I feel is the essence of science.
27 February, 2013 06:19

Kristina Killgrove said…
I definitely see your point. The ideal of Thomas Jefferson and his ilk is what academia claims to want, but in practice, we are all highly specialized now.

I'm not against people studying multiple fields. For my own work, I've obtained degrees in Latin, classical civilization, and biological anthropology which are still, in most parts of US academia, seen as totally antithetical. If research fields are, in essence, different ways of understanding the world around us, then of course it's best to cast one's net broadly.

But you can gain all the knowledge you want without pursuing degrees in it. I've taken courses in statistics, chemistry, biology, scanning electron microscopy, along with anthropology, Latin, Old English, and art history. But I only went after degrees that were necessary to start my career.

I feel like Wells is just tripping through academia, collecting majors and degrees like so many Pez containers. Most of the scientists on the show have multiple degrees: doesn't Hodgins have two PhDs? I dunno, maybe Wells' personality annoyed me more than his degree-hoarding because the writers feel the need to up the eccentricity factor with every new intern.

I maintain, though, that if I had to work closely with someone on numerous cases, I'd want control over hiring. Wells is an ass, and there's no way he'd pass an interview in the real world.
27 February, 2013 06:53

Mark said…
I agree with you completely Dr. Killgrove. Wells was a little...ok, let me reword that...VERY annoying. He was honestly driving me insane to where I could only watch half of it on Monday and then I watched the second half today. Lol. And that's saying something because I am a huge Bones fan and have watched every single episode every single Monday that they premiere.

Many of the scientists do have multiple degrees. I mean Hodgins' degrees are interrelated because they can be backed up into his forensics work, just as your studies back up into your primary Anthropology work. The same thing could be said about Angela, Zack, and I believe Brennan as well.

But with Wells have so many different degrees that do not correspond properly with each other, it doesn't shine highly on the Jeffersonian (at least in my opinion it doesn't). It sounds to me like he wants to be a lifetime student...nothing more.

And usually Brennan does hire her interns. Remember when Zack when to Iraq she was having trouble finding his replacement and Cam said that she wouldn't hire one for Brennan, that was showing that Cam doesn't want to go over Brennan's head because we all know that Cam REALLY works for Brennan. Lol.

But overall, I enjoyed this episode a little bit more than some of the previous ones. I think the show is getting tiresome...though I will watch the show no matter what because I do love the show. I love Booth and Brennan together but I think once they got together officially it sort of ruined the show because that tension between the two main characters was what brought people coming back to watch it weekly. Now that they're together it seems like there's nothing really to wait for. :/
01 March, 2013 19:24

Anonymous said…
Just like to point out that, they don't need Felix's DNA to compare the second victim....just take the first victim DNA to compare it will do..the DNA can show how many percent they varies as an uncle's DNA will only match to a certain level where a father's DNA will match to another level..
21 April, 2013 22:33