The Friend in Need
Episode Summary
A homeless man brings a locked suitcase to a pawn shop, trying to sell it.  As he pries open the lock, he reveals the contents: a giant mass of blood, bone, and decomposing human flesh.  The suitcase is transported to the Jeffersonian, where Brennan immediately identifies the victim as male based on the 90-degree gonion (sic) angle (where the mandibular body intersects with the ascending ramus, Brennan says, like no one on the team has ever taken an osteology course).  The lack of fusion of the sphenooccipital synchondrosis tells Abernathy that the victim was in his mid-teens.  Hodgins suggests that phytoplankton and krill could tell where the body was dumped, but then he disappears for the next 40 minutes of the show, never to bring up that point again.  The fracturing on the bone appears to be mostly postmortem, which is odd since the body was in a locked suitcase the whole time, not banging around on anything. 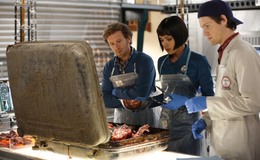 During the first commercial break, the team apparently positively IDs the body using dental records, as Sweets and Booth head to Martin (Manny) Mantecone's house to give his mother the bad news.  Her friends, Blonde Mom and Kat Martin are also there.  Kat was the last person to see Manny, at a big party two weeks prior.  Booth gets word from Saroyan that Manny's tissue revealed high levels of ketamine, or Special K.  Manny's mom insists he wasn't into drugs.  A search of his room shows Booth that Manny was "fixing" cell phones, and he had a huge wad of cash as well.  Angela works her magic on the cells and finds that Manny was texting Kat quite a bit but also a guy named Nick Pavonetti.  Booth questions Nick at his place of employment - Pavonetti and Sons Moving and Storage.  Nick was the frontman for Manny's operation, selling the "fixed" phones.

Abernathy continues to check the remains for cause of death.  He notices two depressions bilaterally on the frontal bone and one on the left parietal, which Brennan thinks were holding points from a halo traction brace, which apparently Manny was in as a kid due to a car accident.  (This was never explained.)  She also points out osteophytes on one of the cervical vertebrae at the transverse foramina.  Somehow this gives her cause of death, namely that cervical nerves 3 and 4 were severed, causing asphyxiation because of their connection to the medulla.

Throughout the episode, Kat is searching for the person who raped her at the party.  She confesses the rape to Sweets, who tells the cops.  The cops then decide to subject Kat to an invasive medical exam for a rape that happened two weeks prior.  Sweets shares his past with Kat and vows to help her find her rapist.  For a while, they think it's Manny, since he had Special K on him, and Kat's mother confirms that Manny was being creepy.  But histological examination of Manny's liver reveals he didn't take Special K, it was just with him at the time of his death.

Angela meanwhile pores through a site called HipstaShotz looking for clues about Manny's death.  She finds him looking at Kat, and getting into a fight with the kid she was dancing with ("the Saunders boy").  Booth brings the Saunders boy in for questioning, because apparently he's 18 and doesn't need or want his parents there.  He admits to yelling at Manny, but he didn't hit him and just started dancing with another girl.  Later, Angela searches the photos for Kat, and they isolate her in the backyard, upset after Manny got into a fight with her dance partner, and see her being drugged and taken to the garage.

Abernathy finds a pattern in the bone fractures.  There are six avulsion fractures that are symmetrical and nearly parallel, likely sustained after Manny was dead.  The patterning of the fractures is a little more confusing, with injuries to the scapula, T verts, rib, and iliac crest.  Abernathy suspects localized force imparted by three sets of evenly-spaced linear bands.  Hodgins finally gets something to do--apparently there were particulates in the suitcase that he thinks are from a polyfiber woven material used in straps or belts.  When ratcheting belts are placed around a suitcase, they would produce enough force to crush Manny's skeleton in the way the Jeffersonian team was seeing.

Since Nick works for a moving company, Booth and Brennan go question him.  Brennan finds the straps, with blood still present on them, and Booth arrests the kid.  They question him at the FBI (another kid who's apparently over 18 and doesn't feel the need to call in representation).  Nick says that someone paid him and Manny paid in Special K for the phones; Nick then had plenty of the drug to roofie Kat.  He raped her, but then Manny found out and got mad.  Nick then killed Manny and dumped his body with the Special K in the suitcase in the lake.  Booth suggests that he can't charge Nick for both rape and murder, so they get Nick to confess to rape.  And then somehow have him also on a murder charge (that he didn't actually confess to?).  The green eye that Kat kept seeing in her nightmares was a green evil eye pendant that Nick wore around his neck.