The Bod in the Pod
Episode Summary
The episode opens with the Jeffersonian team on the beach inspecting a plastic pod full of decomposed human remains.  Brennan waxes on about all the fecal coliform bacteria and chemical contaminants in the ocean.  Although she initially claims she can't "determine gender" of the remains by looking through the pod, she shakes it like a Magic 8 ball, and the skull floats up so she can see the angular eye orbits and large mastoid process, which suggest the deceased was male. 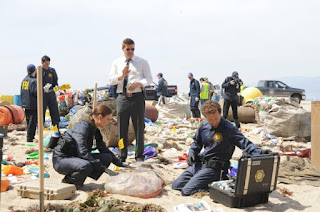 Back at the Jeffersonian, Hodgins and Vaziri mention the deceased was a Caucasian male, although no one ever explained how they did ancestry determination.  The body is sealed in some sort of organic, multilayered polymer.  Hodgins uses a laser cutting tool to open up a small hole in the top then decides to sniff the contents of the pod.  He passes out because the remains decomposing in an anaerobic environment produced loads of carbon dioxide.

With the head removed from the pod, Brennan notices blunt force trauma to the posterior plane of the occipital with rough-edged abrasions.  The upper and lower central and lateral incisors have been smashed out.  There are wood splinters in with the body.  Hodgins discovers that the pod itself is simply normal plastic sheeting.  The body, wrapped in plastic, was exposed to direct sunlight.  The heat, combined with the bacteria and lipids, created a catalyst that hardened the plastic.  Vaziri estimates the age of the deceased at early to mid-40s based on the auricular surfaces of the ilia.

A stamp on the lumber brings Booth and Brennan to Lumber for Less, where the manager, Renee, is upset to learn that Lucky (aka Charles Milner, whom she identifies based on Angela's facial reconstruction) is dead.  They had been lovers.  Lucky was a crime scene clean-up professional.  Renee points to Lucky's wife, but the wife had no illusions that Lucky was faithful.  Booth and Sweets bring in Davey, Lucky's stepson, for questioning.  Sweets thinks that the mother-son team of Lucky's widow and her son are the likely murderers.  Davey, though, points them in the direction of Melvin Carville, a crime-scene-clean-up competitor.

Meanwhile, Angela is trying to figure out a murder weapon.  She thinks it might have been one of the clean-up tools, and based on the serrated marks on the skull and blunt trauma to the mandible and maxilla, she identifies a wrecking bar-style tool that Davey, Lucky, and Melvin all had.  Sweets interviews Melvin, who claims that he and Lucky were going into business together and that he didn't kill him.  Of course, when the FBI requests to see all the tools, there's blood all over Melvin's and Davey's tools are wiped clean.  Hodgins runs an "isotope" comparison of the pod plastic with the plastic sheeting that Melvin and Lucky both used; it seems to have been Lucky's plastic, which suggests he was killed at a job he was working.

The last job Lucky was working was a home invasion of an elderly woman; the murderers thought she had a lot of money stashed away but didn't find it.  Lucky won the bid for the flooring estimate, because he was sleeping with Renee from Lumber for Less.  Brennan thinks that Melvin is the killer, but she has no evidence, so she has the Jeffersonian team comb the old lady's house.  She finds nothing, Melvin walks, but then Brennan gets an idea in the middle of the night - run a hair dryer over the cement floor, and blood will appear.  The blood has four relatively dense areas, which Brennan thinks are from the murderer cleaning up while on his knees (and feet).  One of the four dense spots is perfectly round - the result of the murderer having an artificial knee.

Booth brings Melvin in for further questioning.  He explains the knee print and confirms that Melvin has an artificial knee.  Brennan presents a bag of cash that was found in Melvin's house.  Turns out, Melvin wanted to get the bid on the old lady's house because he thought there was still cash squirreled away somewhere.  He was right, and he didn't want to split it with Lucky.  So he killed him.

Forensic Solution - C.  Again, hand-waving.  Lasers!  Isotopes!  Gender determination!  I do not think those words mean what you think they mean.

Drama - C+.  The drama of the murder mystery was pretty terrible.  But I'll bump this grade up because I don't mind the Vaziri-Saroyan drama at all.  They seem fine for each other... both have names that are difficult for me to type.  Overall, a thoroughly boring, mediocre episode.

Anonymous said…
His teeth were smashed out, so dental records wouldn't be all that helpful.
20 November, 2012 01:35

Kristina Killgrove said…
Ah, but only his incisors were smashed out. Dental records are most useful from the posterior teeth, as those tend to be where people get the most cavities.
20 November, 2012 06:13

Amanda said…
I love this blog! They should hire you as a script expert. This stuff must drive Kathy Reichs crazy too.

Some of these things are really obvious (like Hodgins inhaling the fumes like an idiot) but your expect commentary is really interesting.
20 November, 2012 06:29