The Partners in the Divorce
Episode Summary
A couple of homeless men stumble upon a burning corpse.  As they try to figure out what it is, the brain explodes through the side of the skull. 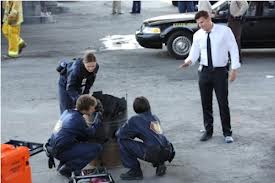 The Jeffersonian team reports to the scene.  With no blow fly eggs or larvae, Hodgins cannot estimate time of death.  Brennan guesses the victim was a Caucasian male based on the nasal root and brow ridge.  She notices something metallic adhering to the sixth cervical vertebra.

In the lab, Abernathy is squicked out by the gooey body.  Xrays confirm the metallic object in the neck and reveal multiple fractures to the ribs, both femora, and the tibiae.  Based on the serial numbers on the stents in the heart, Saroyan gets a positive ID on the victim: Richard Bartlett, a divorce attorney for wealthy couples.  Hodgins and Angela figure out that the metal in the victim was a fountain pen.  Abernathy realizes that the concentric microfracturing to the occipital was the result of a fall not of the brain exploding when it was heated.

Meanwhile, Booth and Sweets are trying to figure out who had motive to kill Bartlett.  Former clients Melanie and Gavin were the last ones seen with Bartlett, but when Booth and Brennan visit them, they claim to have reconciled in anticipation of a new baby.  Hodgins puts Sweets on the trail of a chef who was a former client after he finds that Bartlett's last meal was a burger made of Rattus norvegicus, the common brown rat.  But the chef, although he had motive, had served Bartlett the same rat burger every week for two years and was waiting to see the look on his face when he told him.  Angela puts Booth on the trail of Margo Sandoval, Bartlett's assistant who was also having an affair with his wife.  But she was simply protecting Bartlett's wife by shredding things that documented their affair.

After Abernathy and Angela mock up some possible scenarios that could explain Bartlett's injuries, Brennan has an a-ha moment: he was tossed down something similar to stairs, namely, the chute from Bartlett's penthouse office to the ground that the construction workers had set up.  Brennan peers down into the chute and confirms there is blood and tissue stuck to it.  Hodgins identifies the substance in the fissures on the squamosal suture as a solvent used by architects in modeling.  This points to Gavin, and he and Melanie outdo one another in the FBI questioning room by alternately confessing to various parts of the murder.

Ratings
Forensic Mystery - C-.  All parts of this mystery were telegraphed from a mile away.  Not a particularly interesting case this week.

Forensic Solution - B+.  I mean, they ID'ed the guy... from his stents.  And I guess the injury pattern was sufficiently interesting (if implausible) to help with the cause of death.

Drama - C.  The plot wasn't terribly interesting this week, since it was clear from their introduction that Gavin and Melanie did it.  The character drama this week was focused on how Booth and Brennan need to rebuild their relationship.  That's a good idea, and I'm glad the writers aren't just sweeping the past three months under the rug, but something about the Booth-Brennan pairing still just doesn't work for me.  It's just too awkward, even when it's not supposed to be awkward.

Adam said…
Re: The pronunciations, most of what I've seen on this blog of you sounding out words in text sounds like how we would say them in the UK. So we say "skwah-mus" not "skway-mus". I assume these are therefore closer to the latin pronunciations then compared to the US? Which would make sense I guess. So yes anyway, I think you pronounce medical/scientific words like we do in the UK.
25 September, 2012 03:59

Anonymous said…
Well, looking at my thumb I can see how slamming it into a door can damage the metacarples. If the thumb is slightly inside the door and the pressure was on the "meat" of the hand it could damage the longish bone connecting the thumb to the wrist (sorry, but I usually deal with animal skeletons, most of which don't have thumbs). And from experience getting my hand slammed into car doors, I can attest to the fact that it's usually not just one bone that gets hurt. Odds are good that other bones were involved, particularly if the hand was that far back.
02 October, 2012 14:44

Danny Boy said…
Do you know why they ignored the cliffhanger plot with Pelant from the last epidose? It's killing me what happened???