The Don't in the 'Do

Episode Summary
A bunch of birds, heads covered in new blue goo (gooey gooey), fly erratically around a congregation that is hoping to build a new church on a garbage dump, then immediately die.  One was clutching a piece of skull with an eye still in it.

Apparently, this is the FBI's jurisdiction, so they start flagging the birds and find the decomposing skeleton.  Hodgins estimates time of death at around two weeks prior.  Brennan notes from the advanced fusion of the sacrum that the victim was male, around 30 years old, and about 185cm tall. Because of course you can get all that information from one highly variable bone.  He also has no hair, so you know that'll be important by the second or third act. 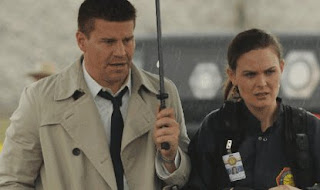 Back at the Jeffersonian, Brennan and Vizidi get to work on isolating the scavenger marks from any marks that could lead them to figure out cause of death, Hodgins tries to identify the blue stuff, and Saroyan tests the tongue for drugs.  Almost immediately, Angela gets a hit on her facial reconstruction - Santiago Valmont, an in-demand hairstylist who was sleeping with numerous clients in exchange for money to buy drugs.  The list of suspects ranges from the women whom Santiago was sleeping with to the people he worked with - namely, the salon owner, a fellow stylist named Kevin, and the shampoo boy, Theo.

After Vizidi and Angela digitally remove all the scavenger marks, Brennan notices micro-incisions on the frontal bone, which she concludes was scalping.  Booth and Sweets take a joy ride in the latter's Toyota Product Placement with Entune technolosnooooooze to question the owner of the store outside of which Santiago got a parking ticket before his death.  The owner, Purab, absconds with a bag of hair, but Booth tackles him, then he and Sweets fondle crotchless panties. (Srsly.)

Hodgins decides that the bag o' hair needs to be separated, and since no one else works at the Jeffersonian, Saroyan and Vizidi have to do it.  He brings them wool carders from the Colonial England diorama because a) he doesn't understand how to treat museum artifacts, and b) he doesn't understand what a wool carder actually does.  Brennan meanwhile actually looks at the skeleton and sees fracturing to the L4 and L5 vertebrae; these injuries are never discussed again.  The big bag o' hair represents 25 different individuals, all removed postmortem.  Santiago's hair isn't in there.

Turns out that Purab was the natural hair supplier for both Kevin and Santiago, whose weaves were legen-waitforit-dary.  He got the hair from his uncle, a mortician, before the bodies were cremated.  Kevin is looking pretty guilty at this point, since he was dealing drugs to Santiago and had bought two gallons of antifreeze for his car, which appears to be the accelerant that was used to torch the body.  But Vizidi finds a superficial incision at the inferior margin on the anterior aspect of the body of the hyoid, 2mm superior to the attachment of the sternohyoid muscle.

Based on the location of the sharp trauma, Brennan has an a-ha moment in the spa with Angela, realizing that Santiago was getting his hair washed when his throat was sliced open.  This leads Booth and Brennan to Theo, the only person Santiago trusted with his long, glorious, Fabioesque mane.  Theo just wanted his own chair in the salon, but Santiago laughed at him.  In a particularly unnecessary twist, Theo has kept Santiago's hair and scalp on a mannequin.  Oddly, Brennan does not anthropologize the hell out of this instance of trophy-taking.

In the B plot, Brennan complains that her pre-baby clothes don't fit her.  Of course they won't, since she's only 6-8 weeks postpartum and still nursing, but whatever.  Booth and Sweets pick out lingerie.  Angela convinces her to go to the spa.

And in the C plot, Vizidi gets an article accepted to the fictional Journal of Forensic Anthropology.  There is absolutely nothing factual about this plot, as the writers clearly have no idea how academic publishing works and didn't even bother to do a little research or ask one of their forensic consultants for some ideas.  But more on that in the...

Forensic Comments
Dialogue and Plot Comments
Ratings
Forensic Mystery - D. I hate episodes when the facial reconstruction that we've never seen gets a "hit" in a magical database and IDs the victim. Makes for boring television.

Forensic Solution - D. Really, the sacrum told you age, sex, and stature, Brennan? Why not race? Hair color? Favorite death metal band? I was most interested in Vizidi's program to remove scavenging marks, but it didn't help find cause of death. And I'm not convinced that a teeny nick to the hyoid could be seen, let alone that a cause of death could hang on it.

Drama - D-. There was no drama in this episode. Like, really, none. Did you care about the victim at all? About the killer? About Sweets' car? Booth's cliched confusion about lingerie? Brennan's trumped-up body issues? I didn't think so.

What a fun episode to hate on. Next week: fishing puns!

Lynne G said…
Wow - sounds as though you didn't like this episode. This was one of the first I've seen in a long time, and I have to admit that even though I only gave it 25% of my attention, it was pretty shockingly stretching science! Nice review.
16 April, 2012 22:48

Lara said…
Yes, it was a fun episode to hate on. What baffles me to no extent is how easy it would be for the producers/writers/etc to check on their facts. Not sure how DNA technology works? Ask! Not sure how facial recognition software works? Ask! But I imagine they all think that if there are no results in less than a day it's not interesting. I'm sure they'd be surprised to learn that tox reports take months (MONTHS!!) to complete and that really, the only thing that takes a few hours is printing (and that's if the prints are in the system). Argh. I used to actually enjoy this show; now I watch it to see if I can catch all the mistakes that you would catch :)
17 April, 2012 06:13

Anonymous said…
I am so glad I found your blog! Always interesting and I always learn something! We lay folk miss a lot in these shows, but now I know that an advanced fusion of the sacrum will not tell me age, sex, height, or race of a person. This information may well save my life one day. :)

Monica B said…
Hey,
I've read all of your Bones episode reviews, and I've never commented so I thought it was about time :) I'm an anthro student (undergrad, but I plan on grad school!) and I adore reading these reviews. For me it has become a game- I try to guess what you'll comment on being inaccurate while I watch! And honestly with the latest storyline choices, it's 99% of the reason I watch any more.

So I wanted to tell you that these reviews are amazing :) and it would be really cool if you went back and did the previous seasons too!!
23 April, 2012 17:39

emma harvey said…
i think Hodgins was simply thanking a friend. He didn't seem stoked about getting a footnote. Though yeah, the whole publishing thing was a big oversight... Which they could've easily gotten right.
10 October, 2012 20:20

Unknown said…
Thanks for clearing up the publication issue. I was wondering if things were significantly different over in touchy-feely anthropology land. My adviser's rule was three pubs before you thought about defending.
07 July, 2014 22:39

Unknown said…
I just saw this as a rerun, and the publishing bits hurt me so deeply that I searched the internet until I found a blog that could share in my agony. You did not disappoint, and I was pleasantly surprised by all of your commentary. I will be coming back. Well done!
02 May, 2015 22:15