The Warrior in the Wuss

Episode Summary
A couple guys playing hooky from work stumble over - or rather, into - a headless body.  Brennan and Booth arrive, with Hodgins, to scope the scene.  Brennan notes that the person was male based on the heart-shaped pelvic inlet, Hodgins estimates time of death as three days prior based on blowfly larvae, and Booth falls down a hill and finds the head in a puddle. 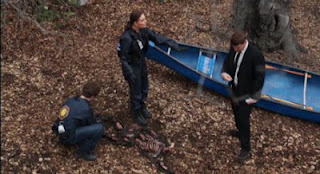 At the Jeffersonian, Saroyan finds that the stomach and pyloric sphincter are intact, which will allow her to figure out the last things he ate.  Brennan estimates the man's age at death as 26 to 36 years old based on the pulp cavity depth of the maxillary central incisor.  She and Clark note a perimortem wound on the man's right ischial spine, consistent with a stabbing injury that may have severed the external iliac artery.  Angela's facial reconstruction and vital stats don't get a hit in the missing persons database, but Clark notes the man's height may be exaggerated.  He found markers on the man's right distal interphalangeal (DIP) joints and calcaneus that make him think the man wore lifts or heels.  With an exaggerated height of 5'8" (rather than the man's real height, 5'5"), Angela gets a hit - Tony Cole.

Cole's wife notes that Tony's colleague at Spark & Steel, Karl Singler, often made fun of Tony's short stature.  Clark examines the cleaned bones and finds the tip of a weapon that was at least 7" long embedded in Tony's ischium.  Booth and Bones decide to go check Karl out - they find him with a van full of metal implements, many of which fit the description of the murder weapon.

At the FBI, Sweets tells Booth that a recent police report was filed against Tony.  He tried to start a fight with his son's karate teacher, and the son called 911.  They question Danny, the son, about it, and he admits to picking a fight with Blake, the sensei's kid. Meanwhile, Saroyan notes points of compromised periosteum over the pelvis and lower extremities that indicate bruising with highly localized points of impact.  All of these lead Booth and Brennan to question the sensei.

But the style of karate being practiced is shodokan aikido, or "empty hand" (no weapons).  Brennan still wants to measure the sensei's hands and feet to see if they match Cole's bruises.  Using Angela's technology, they determine that the person who caused the bruising was smaller than the sensei, possibly a kid.  Saroyan finds lots of peanuts in Cole's stomach, and Hodgins rehydrates and dissects a mezcal worm he found.  Because of the small but precise bruises, Brennan and Booth return to the karate studio and question Blake, the daughter of the sensei.  She admits to beating up Cole, after he got irate when she defended herself against Danny's attack, and she has proof of it - her friend videotaped it and uploaded it to "WeTube."

Clark once again reexamines the ischial spine.  Scratching on the bone makes it look like Cole was stabbed from the front, then the weapon was pulled out the back, an unlikely scenario.  Hodgins traces the contents of the mezcal worm to a specific distillery in Mexico, which makes Maguey del Sol.  Only three bars in the D.C. area are licensed to sell it, and one is on Cole's normal work route: Cantina Carreras.  Booth and Brennan talk to the owner, who admitted to giving Cole the liquor.  Cole had had a bad day, as the video of him getting beaten up by Blake had just gone viral.  Sweets and Angela attempt to track the hits to the video, and they determine that the source of the virality was likely Karl Singler.  He spread it to all of Cole's customers, hoping they'd defect to him.  It seems Cole found out about this, confronted Karl, and Karl kill him with the curved fishing blade on his multi-tooled knife.

The B plot this episode involves Hodgins' buying more equipment than the Jeffersonian can afford.  He is instructed to return at least some of it by Saroyan, his boss, but he ignores her.  He uses each piece of equipment to help solve the case, then uses the equipment at the end of the episode to distill alcohol and make guacamole.

In the C plot, Parker is back from England(?) and meets his new baby sister for the first time.  Although he seems happy, he starts sneaking out of the house and then destroys some of his possessions.  Brennan and Booth finally confront him, and it turns out he's made a mobile for Christine.

Forensic Comments
Dialogue and Plot Comments
What I Like about Bones (Clothing Edition)
Ratings
Forensic Mystery - B.  It took a bunch of different methods to finally ID the victim.  Although I would have preferred for them to use more accurate (and multiple) methods, the mystery about the weapon was decent.

Drama - C-.  The murder mystery was slightly more involved than most episodes, but the Parker story line was lame (and telegraphed from a mile away).

Next week: Christine gets kicked out of the Jeffersonian's daycare?  Could be interesting, or could be lame.

Anonymous said…
I was, also, wondering why Parker has no accent after just returning from England.
24 April, 2012 14:29

Kristina Killgrove said…
They said Parker was only there for four months. (Or maybe it had been four months since he'd visited?) I seem to have missed the episode where he moved to England... but I wouldn't expect him to pick up an accent.
24 April, 2012 19:37

Fishstick said…
I really enjoy the perspective you provide on the show but I just wanted to point out that it is possible they do verify the sex and age through other methods, they just wouldn't want to keep revisiting the same point, that would get rather boring to watch if they kept making the same point multiple times.

Melanie said…
You can find the dress at Madewell

Anna Geletka said…
I've always heard ISH-ial, not ISK-ial. I think they rely too much on dictionary pronunciation and not enough on real professionals.
06 May, 2012 16:14

Lexi Ialungo said…
I had no idea Parker was gone, for one.

Additionally, at the end of the episode, Hodgins makes a mixed drink in a rotovap. First off, GROSS, secondly, he mentions how "expensive" a rotovap is... They are pretty standard and if I recall, not terribly expensive.

And the drinking out of glassware like round bottom flasks and beakers, what?

emma harvey said…
"Hey, the victim was a golfer. This was mentioned once. Based on nothing. And then never spoken of again."
After mentioning Booth calls her Bones. Bones isn't her last name. It's a nickname he personally came up with at the beginning of the series, so for him, it's personal.
10 October, 2012 21:11