The Forensics of Temperance Brennan

In the December issue of American Anthropologist, forensic anthropologist Heather Walsh-Haney published an interesting review article on the forensics in Kathy Reichs' series of Temperance Brennan novels (which have, of course, been further fictionalized as the FOX television show Bones - reviewed here by me). 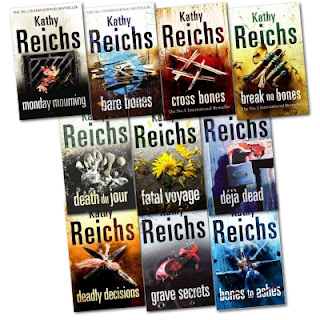 Walsh-Haney appreciates Reichs' popular press books, noting that they do much to counter the "public's misguided and exaggerated expectations regarding the infallibility, ubiquity, and timelessness of forensic science" (p. 650).  The novels in fact "comprehensively and correctly educate the public about forensic anthropology, including its limitations and challenges" (p. 651).

Another laudatory aspect of Reichs' books, according to Walsh-Haney, is the inclusion of participant-observation and ethnography.  Most examples that I can think of from the books (and, yes, I have read every single one, cover-to-cover, mostly on airplanes), though, are more about Brennan interviewing suspects and witnesses and not what I'd consider Reichs' highlighting "both the holistic nature of anthropology and how those elements might be brought to bear by current [forensic] practitioners" (p. 651).

I do like that Walsh-Haney criticizes Reichs for her outdated use of race/ancestry: "Brennan uses the antiquated terms Caucasoid and Mongoloid to describe human diversity... the public's understanding of the practice of forensic anthropology would be further clarified on this point if Reichs were to use her fictional narrative to introduce the history behind the terms and current usage" (p. 651).  One of the things that always annoys me in Reichs' books - aside from the un-complicated assessment of "race" - is that she (or her editor) always uses "phalange" instead of "phalanx" for each of the finger bones.  I swear that word appears at least once in every book, and it just makes me cringe.

After reading Walsh-Haney's brief review article, I was a bit surprised by the high praise.  Granted, Reichs' books are the best and most accurate of any forensic-true-crime series I've read (ahem, looking at you, Patricia Cornwell... ugh).  But they can be readily critiqued.  In the past, I have required all my undergraduates in Intro to Forensic Anthropology to read and review Reichs' Bare Bones in comparison with the information presented in Byers' Introduction to Forensic Anthropology text.  (The guidelines for the review assignment are here for anyone who's interested).  Unfortunately, I don't have notes or copies of students' papers, but we found plenty of fodder for a lively discussion of the realities of forensic anthropology and the liberties taken when writing a popular novel.

At any rate, now that I know it's possible to get published in American Anthropologist by writing about Temperance Brennan, I gotta put together an essay on Season 6 of Bones.  (I'm only half joking.)  The TV show is most definitely not as accurate as the book series, but it's entertaining and often informative.  That counts for a lot.

Anonymous said…
have you read any of Jefferson Bass's works? They are really enjoyable also..
05 February, 2012 19:39

Kristina Killgrove said…
I have. There's a new one coming out in a couple months. I loathe that series, though. Maybe I'm biased, though, since I've heard that Bill Bass is a huge jerk. Oh, and the writing is kind of terrible.
05 February, 2012 19:40

Wow! So wonderful to have discovered your blog.

Have you seen Beverly Connor's series? She got one series featuring an forensic anthropologist, and another featuring an archaeologist. They're quite similar to Kathy Reichs.

Haven't read the Bass series, but a friend has and wasn't overly impressed.

BTW. I'm an Australian anthropologist (socio-cultural) just beginning an MA in archaeology,(after already completing a PhD!) specialising in human osteology. I work for a small government agency who records & protects Aboriginal sacred sites, but also has the legal carriage for the ID and repatriation of traditional Aboriginal burials, so very much looking forward to getting back into the study.

Kristina Killgrove said…
Hi, Amanda. I have not read anything by Beverly Connor. Might have to check into her work... Thanks for the suggestion! (And glad you're enjoying my site. :)
14 February, 2012 08:47

Unknown said…
Thank you so much for posting! I’m definitely going to do that review assignment. I am a big fan of Kathy Reichs and Bones. Though I have to say, I often laugh out loud at the interesting deductions made by Tempe or her interns, sometimes based solely on a stapes! I think it is so important to clarify forensic anthropology for the public because popular culture presents anything forensic as a fail-safe solution to criminal investigations. Whether economically or technologically, there are many limitations to forensic investigators and not every case gets solved like in Bones or other TV shows.
30 January, 2016 00:00