When I posted my piece on Teaching Preschoolers about Archaeology, Bioanthropology, and the Classics over on G+, Bria Dunham suggested a book I'd never heard of: Gakky Two-Feet, written by none other than Micky Dolenz of the The Monkees fame in 2006.

Now, I grew up listening to every song The Monkees ever recorded, since my mom was a huge fan of Peter Tork, and Nickelodeon broadcast all the old episodes of the TV show, which my brother and I watched religiously.  So when Peter came through Charlottesville and played folk music at a small coffeeshop some time in the early 90s, my mom and I went (and I was way too shy to say hi after the set).  And when The Monkees reunion tour was announced this year, I was disappointed to find out that they were coming to Durham just a couple weeks after I'll be moving to Nashville. 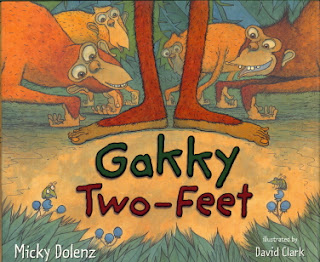 Needless to say, following Bria's suggestion, I immediately ordered Gakky Two-Feet and got it in the mail yesterday.  It's quite a cute little book.  The protagonist, Gak, is a "hominidee" living about 5 million years ago in the Big Trees of Africa.  Gak is an oddball because he walks on two feet, earning him his nickname, but soon the other hominidees realize that his talent is useful: his mother makes him carry branches to the river, he discovers that he can see further than his compatriots in the high grass of the savanna, and then he saves another hominidee by carrying her out of the clutches of a hungry lion.  In spite of the danger to himself, Gak sounds an alarm about the lion and all his friends also flee.  Gak ends up a hero, and the hominidee female he saves is thankful, expressing her intention to marry him someday.

Somehow, Dolenz has managed to pack a few different theories on the origin of bipedalism into a short kids' book.  He even touches on the ideas of altruism and sexual selection.  In a way, it reminds me of Roy Lewis' The Evolution Man (a fast read for adults and probably appropriate for older kids too) - a kind of a "what if" book depicting the origins of humankind.  The illustrations, by David Clark, are also quite darling (although Gak inexplicably reminds me of a young-and-hammy Hugh Laurie).

The one thing that struck me as odd is the preface by Dolenz, in which he says that "Current paleoanthropological theory holds that our ancestors adapted to upright walking about 4 million years ago (around the time of Australopithecus afarensis - the infamous "Lucy")."  Lucy and her kind weren't the first to walk bipedally, but A. afarensis is the first to show hallmarks of a modern ability to walk (and lessened adaptations to life in the trees).  A minor quibble.

Gakky Two-Feet has now been toddler-tested.  My daughter hasn't memorized it yet, but she requested "Read Gakky Two-Feet!" several times yesterday.  I'd definitely recommend it for ages 2 and up.