Skip to main content
Posted by Kristina Killgrove May 24, 2011

What Lies Beneath Pompeii

Archaeology is a destructive process. The dirt that we dig through isn't just an annoying impediment to the discovery of fantastical treasure--its layers give us important information about temporal relationships between artifacts, provide clues to how and why a grave was disturbed, and serve as a time capsule of natural and anthropogenic environmental change. From the time that I took my first college course in archaeology 15 years ago to this semester, when I taught the archaeology unit in my general anthropology class, one ethical tenet of the field hasn't changed: don't just excavate because you can.
Often in intro to archaeology courses, the go-to example for "don't excavate just because you can" is the site of Pompeii. Destroyed by a volcano in 79 AD, Pompeii has for centuries yielded unsurpassed information about life in the Roman Empire. It was rediscovered in 1749, but excavations were halted in 1997. At least one-quarter of the city is still buried under ash and more contemporary debris, awaiting advances in technology to excavate and preserve the site, important considerations in light of the architectural collapses during the 2010 rainy season.
Fortunately, technology is changing rapidly, and anything that helps us archaeologists avoid destroying our research material as we excavate is welcome. One method that's been helping archaeologists figure out what's under the ground without actually digging it up is ground penetrating radar (GPR). This technology isn't really new - GPR has been around since the 1970s. In essence, high-frequency radio waves are blasted into the ground. When a wave hits something buried - a grave or a wall, for example - the receiving antenna of the GPR device records the variations in the signal that bounces back from the buried object. The resulting image looks something like this (via wikipedia): 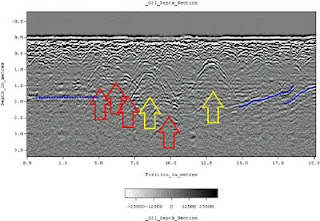 Yesterday, Archaeometry published an early-view article entitled, "Mapping the undiscovered ruins of Pompeii (Naples, Italy) using ground penetrating radar" by Pettinelli and colleagues. According to the authors, theirs is only the second published study on using GPR to find archaeological remains in volcanic soil.
For you classicists out there, the area of interest was near the Nola Gate, between Reg. III and IV. In this area, a road has been partially excavated, and the exposed stratigraphy shows four successive ash deposits: 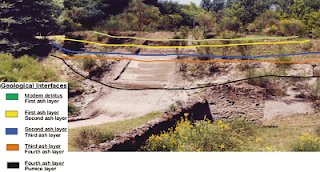 Figure 2 from Pettinelli et al. - Scarp-exposed stratigraphy of the study site.
Using GPR on the unexcavated area, the researchers found the same boundaries under the ground that they could see in the excavated area: the four layers of ash color coded as above. But they could also see anomalies underneath the ground (in red):

Figure 3b from Pettinelli et al. - Boundaries and anomalies detected by GPR.
The importance of this study (as far as I can tell, never having done research with GPR myself) is that this technology worked on volcanic material, especially considering Pompeii has up to 8m of volcanic ash covering it. In spite of the challenges of using GPR on volcanic material, which has a tendency to reduce the radar signal amplitude, these researchers have shown that it is possible to use this non-destructive technology to find buried archaeological remains at Pompeii, albeit only up to a depth of about 3m. In this case, they suspect the anomalies at 2 and 1.5m depth in the figure above are likely walls.
Also interesting is the authors' use of time domain reflectometry (TDR), a technique that is used to measure the electrical properties of soil. As the depth range of GPR is affected by the electrical conductivity of the soil - with more conductive soil, GPR can penetrate further - it is important to understand using TDR the dielectric properties of the volcanic deposit (and thus how far we should expect the GPR to penetrate).
The authors have successfully used GPR to locate subsurface anomalies at Pompeii. They conclude that:

... the use of GPR could produce a detailed map of the ruins still hidden in the subsurface, giving archaeologists the possibility of reconstructing the entire urban development of this unique ancient city.

Mapping the full city of Pompeii would be a great contribution to the archaeology of urban life in the Empire. It would also produce a significant amount of information about the ruins before archaeologists put even one trowel in the ground - if excavations ever resume, that is.

Unknown said…
The design from the principal radar unit comprises of a sending antenna which normally sends out the pulses of sound. Around the other facet, it includes an obtaining antenna which, since the name implies, identifies and receives those pulses after they strike any underground object. These picked up pulses upon their return can be utilized to build up an image in the underground object. The buried objects can readily be identified using the enable of these pulses because they will range according to the depth and composition of these objects which happen to be uncovered underground.
Thanks.
Concrete NDT
21 November, 2012 06:45