Skip to main content
Posted by Kristina Killgrove May 20, 2011

A Pox on All Your Museums

Yesterday, the Wall Street Journal (among others, but I think this is the ur-source) reported on a smallpox scare in Richmond, Virginia. The reason for alarm? An exhibit on "Bizarre Bits" from the Virginia Historical Society's collection featured a scab the size of a pencil eraser (image credit Jim Gathany in the WSJ). The letter accompanying the scab, dated January 29, 1876, says: 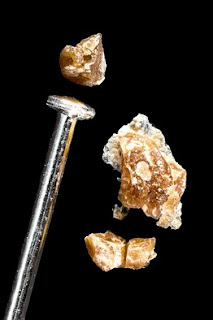 Dear Pa... the piece I inclose is perfectly fresh and was taken from an infant's arm yesterday. Dr. Harris says the inclosed scab will vaccinate 12 persons, but if you want more, you must send for it. I will pin this to the letter so that you cannot lose it as you did before.

The letter writer, William R. Massie, had mailed a smallpox scab to his father, Henry Massie, Jr., in my hometown of Charlottesville, VA.
Smallpox likely evolved when humans started settling down and domesticating cattle, around 10000 BC, but possibly earlier. The disease was particularly virulent in children, and the vast majority of kids who contracted smallpox in recorded history died from it.
By perhaps as early as 1000 BC in India and definitely by the 16th century in China, humans became resourceful and discovered inoculation: either inhaling powdered smallpox scabs or scratching a bit of a smallpox scab into the skin. This process of inoculation (or variolation, from the name for the virus) was actually quite successful, dropping the odds of dying from smallpox to less than 2% from 20-30% mortality rates for adults.
At the end of the 18th century, Edward Jenner had discovered that inoculating people with cowpox prevented them from contracting smallpox, with a much higher success rate than inoculation with smallpox itself and with less risk of inoculated people spreading smallpox to others. He called this process vaccination (from the Latin for cow).
The vaccine changed in the 19th and 20th centuries, but after a worldwide push for children to be immunized against smallpox, the disease was declared contained. By the early 1970s, routine vaccination was discontinued in the U.S. The last known person to have contracted smallpox naturally is up for debate - perhaps it was a two-year old girl in Bangladesh in 1975 or perhaps it was a Somali woman in 1976.
After the disease was formally eradicated, cases did spring up in laboratories. Eventually, stores of smallpox were destroyed except at the Centers for Disease Control in Atlanta and the State Research Center of Virology and Biotechnology in Russia. The World Health Organization recommended destruction of these stores in 1993, but the date keeps being pushed into the future, even though the scientific community thinks there is no public health benefit to keeping smallpox. It is perhaps a concern that smallpox could be used as biological warfare.
It's actually not surprising, given the history of inoculation with smallpox scabs in the U.S., that staff at the Virginia Historical Society would find one tucked into a letter. In 2003, smallpox scabs were found in a 19th century book on Civil War medicine at the College of Santa Fe (NM). In that case, the librarian emailed the head of the National Civil War Museum the same day she found them. The executive director contacted Paul Sledzik, at that time a curator at the Armed Forces Institute of Pathology at Walter Reed, who contacted the CDC, who sent the FBI to Santa Fe to bag and send the scabs to the CDC immediately. I didn't find a follow-up report, but I assume the scabs did not contain live smallpox.
Perhaps this is what the historians at VHS were assuming when they neglected to report their finding of a "bizarre bit" of smallpox scab to the CDC. The WSJ reports that:

A medical historian had told them [VHS] years ago that old scabs degrade. "Our strong assumption was that it was not a danger," Dr. Levengood says. Staff members, wearing gloves, encased the scab in mylar and placed it in a plexiglass display case for the exhibit, which opened in June 2010.

The historians assumed that it was ok to handle and display a biological material known to have contained the incredibly deadly and long-lived smallpox virus? Dr. Levengood is quoted as saying they thought the scab was just a "weird thing." Just a weird thing that is immensely contagious and has killed millions of people over the last several centuries? No, you don't screw around with smallpox.
This case is a bit odd, as the news media just reported on the VHS scab yesterday. And yet the CDC took possession of it in March, after an electrical engineer who'd read a review of the "Bizarre Bits" exhibit in February alerted the museum (who told him not to worry about it!) and then a friend at the NIH about it. His concern was legitimate, but the scab had already been on display since June of 2010. Were it actually infectious, someone - probably a museum technician - would have contracted smallpox. But the CDC is serious about smallpox threats, and they donned hazard gear, sealed the scab, threw it in a cooler, and took it immediately to their headquarters in Atlanta. Within a few hours of receipt of the scab at the CDC, microbiologists determined that it did contain the virus from the smallpox vaccine but not smallpox itself.
I'm curious why the story just came out yesterday and what the source was for the report. It seems to be the WSJ, but I'm not sure about that. Still, this should be a lesson to all my historian friends working with 18th and 19th century manuscripts. If you find something "weird" lurking in a letter about vaccination, please call the CDC, just to make sure you don't unleash smallpox onto an unsuspecting and unprepared populace. (Also, if any of you can find a scanned copy of the letter that accompanied this scab, I really want to see it.)
UPDATE(ish) - 5/24/11: The World Health Organization met today to discuss destroying the two reserve stores of smallpox in the world. The U.S. and Russia keep arguing against destruction, and they've won - for now. The WHO will revisit the issue in three years. [via LiveScience]