Skip to main content
Posted by Kristina Killgrove May 04, 2011

My friend Laura Wagner just pointed me at these shoes on Etsy: 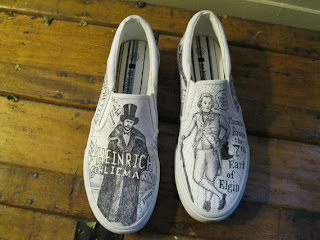 Bad Archaeologists Shoes (Photo from Unwinder at Etsy)
The right shoe is Heinrich Schliemann, the dilettante who insisted he found the Troy of myth (after destroying a bunch of layers), dug at Mycenae and Tiryns, married a Greek woman he advertised for in the newspaper, let her wear a bunch of gold jewelry he'd dug up, and had hilariously Greek-German-named kids (Andromache and Agamemnon Schliemann).
The left shoe is Thomas Bruce, the 7th Earl of Elgin, who infamously managed to remove nearly every piece of sculpted marble from the Parthenon and bring it back to England, ostensibly for safekeeping from the Ottomans who controlled Athens. Greece still kinda wants those back.
Were both of these men bad archaeologists? Schliemann can indeed be called an archaeologist - an amateur one, but he did manage to get someone to give him a PhD - but Elgin was a nobleman and diplomat. Even at the time, Elgin's actions were controversial, so yes, he was a bad diplomat. And Schliemann was indeed a bad archaeologist.
The Etsy description notes that these shoes were originally commissioned for someone. So at the next SAAs, AAPAs, or European archaeology meetings, please be on the lookout for someone wearing these. Or if you spend $41 on a pair of these for yourself, please send me a photo, preferably posed in some bad-archaeologist way.

Laura said…
Glad that my "find" got a shout-out on the blog.

My parents had a Greek myth theme going on for a while with their cats -- starting with Cassandra (because she talked a lot), and then Agamemnon ("Mem" to his friends), and Cyrus (who met an ignoble end). Fortunately I was spared.
04 May, 2011 07:54

Anonymous said…
they belong to (and were commissioned by) my husband, who will definitely be wearing them at the AIA/APA in 2013 Seattle - look for him/them at the American School booth in the exhibition hall!
02 October, 2012 13:16