The warship Mary Rose was fighting near the Isle of Wight on July 19, 1545 in the Battle of the Solent, part of the Italian Wars between the fleets of Francis I of France and Henry VIII of England. As the Mary Rose went into battle, she sank - probably because open gunports and a strong gust of wind caused the ship to flood (Stirland 2000). All but about 35-40 of her crew of around 415 died. 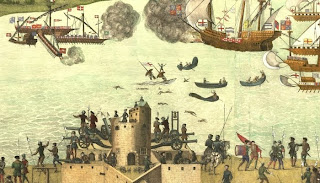 Cowdray engraving depicting the sinking of the Mary Rose, 1545-1548
The wreck was salvaged in 1982 and has been called a Tudor-era time capsule because of the amazing preservation of over 26,000 artifacts: most of the ship (including sails and rigging), its armament (guns and other weapons), its skeletons (at least 179 individuals have been recovered), musical instruments, navigation tools (compasses, protractors, a logreel), and medical instruments from the cabin of the ship's barber-cum-surgeon. 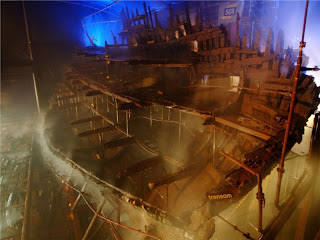 The Mary Rose undergoing conservation
My familiarity with this important archaeological find is primarily related to the 179 skeletons aboard the ship. While researching comparanda for my dissertation, I came across a variety of articles on the isotope analysis of a sample of the skeletons. Bell and colleagues (2009) used carbon, nitrogen, and oxygen isotope analyses of 18 individuals to show that at least one-third of this sampled population were not from Britain but rather had originated in warmer regions to the south. They concluded that these data were evidence of mercenaries on the ship, suggesting the Mary Rose may have sunk because a language barrier among the sailors caused poor communication leading to operator error. Millard & Schroeder (2010), however, quickly dismissed Bell and colleagues' findings, reinterpreting the isotope data to suggest that only 1 of the 18 individuals could credibly be shown to have originated elsewhere. The debate over the cause of the shipwreck continues, but the isotope data are providing great information about the people aboard. 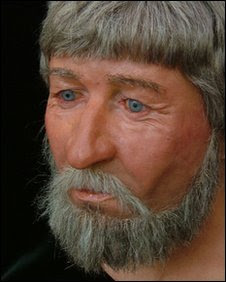 Also providing information about the crew is the morphological analysis of the skeletal remains. There has been at least one forensic reconstruction done based on the skeleton of a man who was found with a whistle, possibly a boatswain (right, via BBC). Then at the Paleopathology Association meetings a few weeks ago, there was a presentation on occupational markers and trauma in an attempt to identify which individual performed which role on the ship. The ship's crew likely had a significant number of longbow archers, as suggested by the 300+ longbows found in the wreck, and the previous osteological analysis indicated that several of the crew had performed repetitive activities with their upper bodies (Stirland 2000). 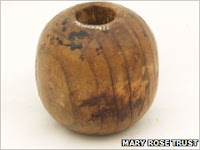 I was interested to see in the Telegraph this morning that a piece of the Mary Rose - specifically, a parrel (seen here) - will be sent into space with the launch of the shuttle Endeavour on Friday. The wooden parrel bead was part of the sail rigging, and John Lippiett, CEO of the Mary Rose Trust, explains that "The Mary Rose was as revolutionary in technological advances 500 years ago as the space shuttle was in the early 1980s." Indeed, many of the navigational tools found on the Mary Rose predate the first written mention of them, including the logreel, which wasn't mentioned in historical records until three decades after the Mary Rose sank.
The unique history of the Mary Rose continues as she becomes the first shipwreck shot into space. I am hopeful this exposure will result in fundraising for the new Mary Rose Museum, which will allow the artifacts and the ship's hull to be reunited under one roof.
UPDATE (5/16/11) - The Endeavour launch was rescheduled for today. As the shuttle had a successful launch this morning, I suspect the parrel is happily bouncing through space now.

Anonymous said…
I've heard recently that the French claim that they actually sunk her is being taken more seriously lately and that the "accidental" explanation might have been believed as more spin. That is, something like: the French couldn't have hit one of our ships, it must have been our mistake.