I was in Las Vegas over the weekend for my brother and newly-minted-sister-in-law's wedding. Although I did make a pilgrimage to Caesar's Palace, hanging with my favorite faux Prima Porta Augustus, I spent more time at the Mirage. Unlike Caesar's, Luxor, or Excalibur, the Mirage doesn't have a specific historical theme, so I was surprised at the sheer number and variety of historically-themed slot machines - and took pictures of all that I could find. In vague chronological order, we have:
Classical Athens (c. 4th century BC). The Greek-themed slot machines all deal with a godly lineage: Kronos, a Titan and the father of Zeus, king of the gods and father of Apollo, god of the sun. The Greek god of wealth was Pluto, so the connection with ancient riches here is unclear: Kronos poses with a temple that has been erected for him, but Zeus and Apollo are depicted mostly as powerful rather than wealthy. 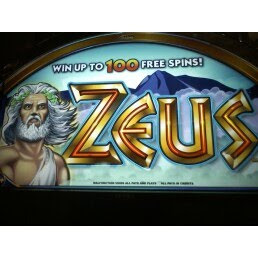 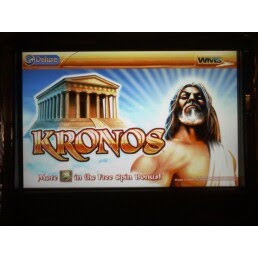 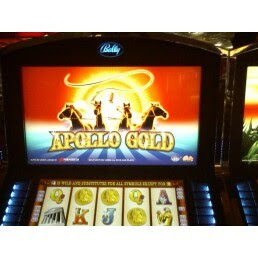 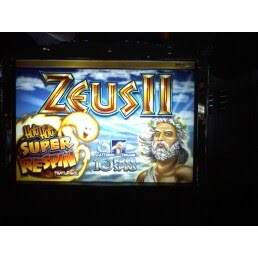 Republican Rome and Ptolemaic Egypt (c. 1st century BC). In contrast to the god-themed slots, from the Roman era we get depictions of real people: Julius Caesar (I assume from the picture and the connection to Egypt) and Cleopatra, whose (green?) eyes are apparently the most recognizable part of her visage. Undoubtedly, Caesar and Cleopatra were wealthy, and they were the most powerful rulers of their day. 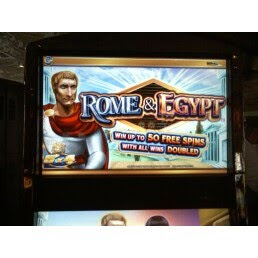 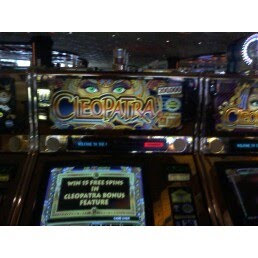 Mayan Civilization (c. 3rd century AD). With the Mesoamericans, the slot machine has no iconic picture to convey the "riches" (and connection with gambling), which has to be specifically spelled out. In another screen shot, though, the riches in question include gold masks, gold coins, alligators, pots, a skull, and the pyramid at Chichen Itza: 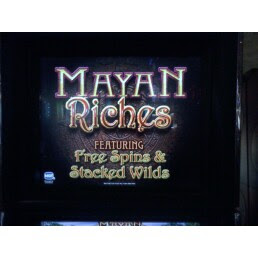 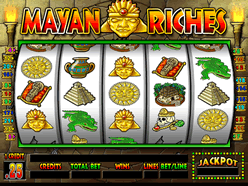 Medieval Europe (c. 13th century AD). Very curiously, there are two slots whose theme involves Medieval times: the infamous knight Sir Lancelot, and the majestic hall to which heroes in Scandinavian mythology go. This period in European history was not exactly known for its wealth - with widespread serfdom, most people lived in crushing poverty. My assumption is that Lancelot and Valhalla evoke a kind of romanticism, an idea that the Medieval past was full of chivalrous acts by gallant men. 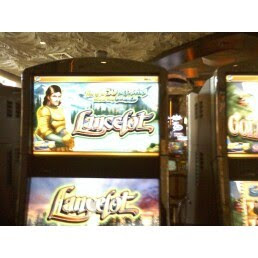 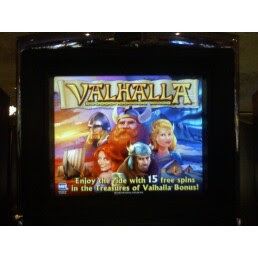 Aztec Empire (c. 15th-16th centuries AD). Like the Mayan-themed slot above, the Aztec one also specifically notes the civilization's "fortune," illustrated by a gold-colored pyramid. It's especially important to note here that the pyramid represented on the slot machine is almost certainly from Chichen Itza and therefore Mayan. When I think of the Aztecs, I think of smallpox and the Florentine Codex, but since the Spanish wanted to conquer them, I assume there is a connection to wealth and riches there. 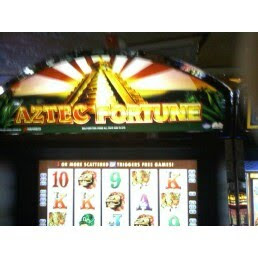 Imperial China (c. 18th century AD?). Finally, I could only find one slot machine with a theme of wealth in Asia. Unlike all of the above, which reference American civilizations, Greek gods, European literary figures, and Roman and Egyptian elite, this one seems to be quite generic. I couldn't find any reference to a specific Golden Emperor, but I'm placing it chronologically in the Qing Dynasty. I would have assumed that the wealth of the East was the stuff of legend, what with the recent history of antiquities hunting along the Silk Road and finds like the tomb of the first Qin emperor and his terracotta army. 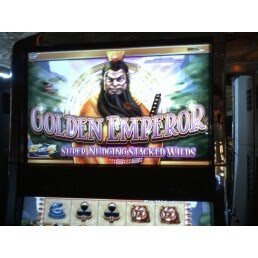 One theme that I assume connects all of these slot machines together is wealth, riches, or fortune. The two New World civilization ones make that connection explicit, but the rest rely on the assumption of a shared Western knowledge of Graeco-Roman history and Medieval mythology. Were ancient civilizations wealthy, though? Not really. The total GDP (wheat equivalent) of Classical Athens, for example, was 200,000 tons; the Roman Empire at its height was 50,000,000 tons. That sounds impressive until you realize that the GDP of the U.S. in 2009 was 66,000,000,000 tons (Scheidel 2011). Then again, Rome had a $43.4 billion GDP (in equivalent 1990 international dollars) (Scheidel and Friesen 2009), which is about the same as the GDP of, say, New Zealand in 1990.
The connection between riches and the ancient world seems tenuous to me and is based on a fetishization of past cultures, which have been divorced from their sociocultural context and reduced to their material trappings. These so-called riches and fortunes are based on our collective Western notions of what constitutes art and what is valuable. I did not see, for example, slot machines with themes of Native American or African cultures, those we still tend to view as "traditional" and "primitive." The ancient world that has been chosen as representative of historic riches is one that is predominately male, white, and European - a description that also applies to today's wealth distribution.
The theme of gambling itself may be the connection instead of wealth. Gambling existed in every culture that is referenced in the slot machines pictured above: Egyptian, Chinese, Mesoamerican, Greco-Roman, and Medieval European cultures all have long histories of guessing or betting on an outcome with money or other objects. Then again, Native Americans have a long history of gambling as well and are not represented in Vegas slot machine themes - perhaps because the culture is still alive in a way that the others aren't?
I'm sure that the choice of slot machine themes is not undertaken lightly in Las Vegas. After all, the psychological manipulation that occurs in order to entice gamblers to continue gambling is the stuff of legend and of reality. All the casinos that I traipsed through over the weekend had a variety of slot machines with a variety of themes - from Green Acres to American Idol, from Alfred Hitchcock to The Little Mermaid, from Greek gods to inaccurate Aztec temples - each designed to make a connection with a patron via some sliver of pop culture and to take that patron's money. But it was the machines with ancient themes that struck me as the most disingenuous. In those cultures, gambling was most often a social experience, far different from our contemporary form, which is pathologized, isolating, and psychologically and economically damaging. The appropriation of ancient cultures by slot machine manufacturers and their use by casinos in Las Vegas is not particularly surprising, but the choice of cultures, iconography, and fonts was particularly interesting to me as an anthropologist who works in the ancient world.

Keith said…
When I was in Vegas last year, I tried finding a slot machine with an Inca theme since that's close to my region. I finally found one but it was on the way to catch the Beatles show so I couldn't play it.
04 April, 2011 12:14