Resistance and Resilience in Archaeology

My news feed has been abuzz in the last week with reports about the stolen antiquities from the Egyptian National Museum and the protests against the newly-appointed minister of antiquities, Zahi Hawass. While the Egyptian people have been effecting their own revolution and trying to reclaim both their past and their future, I've been coming across archaeological reports of resistance and resilience in different forms in the archaeological record of 18th-19th century America. 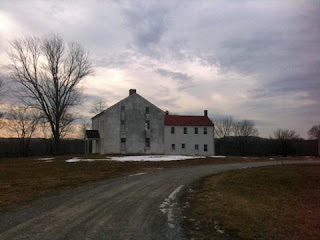 In the early 1800s, a French family emigrated from Haiti and settled in Maryland. The Vincendieres set up a 300-hectare plantation called L'Hermitage that included nearly 100 slaves, an extraordinary amount for the time. The Vincendieres practiced a more brutal form of slavery than was typical in the U.S. at the time, according to historical records. Archaeologists so far haven't found much evidence of the daily lives of the slaves - except for an excess of buttons, which they think may have been cut off when clothes were reused as quilts [Voice of America News, 2/15/11]. An earlier article appeared in the Washington Post (8/26/10) and details the historical information known about the Vincendiere family. Many speculated that the fact they had such large numbers of slaves meant they were selling, trading, or renting them out, and others think that the family was trying to recreate the form of slavery practiced in Haiti at the time, when large numbers of slaves conferred status. The two articles together paint an intriguing picture of an emigrant family that acculturated to their new life in a French colony so much that they brought those practices to their next destination in the American South. As Catholics and French, the Vincendieres were likely looked down upon by their Protestant, German-descended neighbors. The immigrant family may have attempted to cling to some semblance of the social status they formerly had, yet they resisted the "kinder" form of slavery practiced in Maryland. Many of the slaves were sold off or freed within the 30 years the plantation was in operation. The slaves' story so far is one of resilience, of survival in spite of massive odds against them. Further excavations will hopefully help archaeologists find out more about the daily lives of the slaves at L'Hermitage. 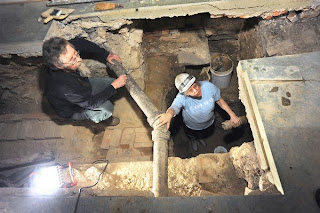 Also in Maryland, archaeologists have uncovered evidence of a mikveh dating to 1845. Mikvehs are small, ritual baths. In the Jewish tradition, particularly the Orthodox tradition in which a mikveh is necessary before a synagogue can be founded, men would be purified before prayer and women following their menstrual cycles. Until 1828, Jewish congregations were not allowed to incorporate or own property, meaning that, rather than meeting in synagogues, Jews would meet in private homes, where the landowner had built a mikveh in the basement. In east Baltimore, archaeologists recently excavated portions of a 5-foot-deep tub connected to a cistern that was connected to a heart, presumably used to warm the water. Dating to the mid-19th century, this mikveh is the earliest known from the United States. They believe that this primarily German community brought the practice of purification and the design of the mikveh as a "cultural template" from their homeland [2/13/11 Baltimore Sun article]. The community that built this mikveh seems to have continued a particular religious tradition that was popular in their homeland but not as commonly practiced in their new home. Despite boasting a "melting pot" approach to immigration that valued cultural assimilation in the 19th and 20th centuries, the U.S. has always been more like a "salad bowl" - various elements mixed together but maintaining a degree of separateness. Still, it speaks to the importance of this Jewish tradition that the community continued a practice that had to be kept underground - literally and figuratively. Maintaining one's cultural traditions and religious practices that seem foreign, scary, or threatening to the established, predominant social group can be difficult, and this finding shows that the Jewish community in east Baltimore resisted religious assimilation and found a way to practice their culture in the face of difficult legal circumstances. 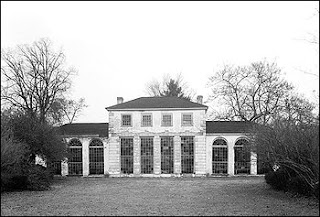 Also in Maryland, Mark Leone and his team have been excavating at the Wye House "orangery," a greenhouse that boasted lemon and orange production in the late 18th century. The team found two very important indications of maintenance of West African religious traditions. In between the bricks of a furnace, archaeologists found a six-inch-long smooth stone that had been walled in, presumably by the slave who built it. Leone interprets this as a talisman, the practice parallel to what is known from West Africa: found stones (particularly those in the shape of axes) represent the lightning strikes of a fortune deity called Eshu-Elegba. They also found in the slave quarters two projectile points and a coin purposefully buried outside the threshold, also interpreted as protective talismans. They may also have found evidence of exotic plants, but there is no additional information in the article about what kind or how the slaves would have obtained them [2/14/11 Washington Post article]. This work at the orangery is uncovering solid evidence of a syncretic religious tradition among the slaves there, blending West African and North American practices. I find Leone's work in general quite compelling, although I know other archaeologists who strongly dislike his approach because of these sorts of interpretations of cultural resilience and passive resistance to the elite. Some may argue that Leone and others of his ilk find resistance where there is none, but if we don't look for resistance in the archaeological record, we likely won't ever find it, like we didn't find evidence of women or children until archaeologists started asking new questions. Although I haven't found evidence of resistance to Rome in my own research, it is still an important question to ask, particularly in terms of the way foreigners and slaves reacted to their new home in the Imperial capital.

The uproar and shock over the missing Egyptian antiquities - gilded statues of the famous King Tut among them - are justified. These items should be in a museum rather than in the hands of fencers and collectors. But in focusing on the loss of Egyptian cultural patrimony, specifically the loss of representations of an ancient elite, we may miss the larger issues: the role that the people have taken in the revolution in Egypt and the ways that they interact with these so-called treasures that to them may be manifestations of three decades of oligarchy rather than a millennia-old culture. And in focusing on the missing Egyptian antiquities, we may lose sight of these important archaeological reports of small-scale finds, our only information about the daily lives of the unknown, socially and religiously oppressed groups of the past: the buttons of the Vincendiere slaves, the mikveh of the Baltimore Jewish community, and the talismans of the Wye House slaves. By highlighting acts of resistance and cultural resilience in the past and the present, we can better understand the human capacity for dealing with change.