A Second Death for the Neonates of Frizzone? 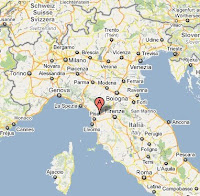 A recent article circulating in the Italian news – variously titled "The Neonates of Frizzone Risk a Second Death" and "Lucca: Appeal for the Little Dead from 2,150 Years Ago Discovered in Frizzone" – by two Italian anthropologists discusses the discovery and seeming lack of restoration/curation of an infant cemetery dating to the late Republican period. In 2006-07, the archaeological superintendency of Tuscany excavated a site along the via del Frizzone, outside of Lucca. The report states that near a wooden building that may have housed a wine press, excavators in 2006-07 found a complex of graves with numerous (the article doesn’t say specifically how many) infant skeletons, a complete dog skeleton, various potsherds, and an architectonic terracotta of Dionysus with dolphins. The implication of the authors is that the artifacts have been studied and conserved but that the skeletons are at risk of being destroyed by neglect. 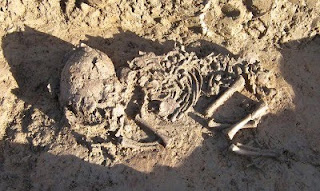 An archaeologist on the project, Michelangelo Zecchini, notes that the infant skeletons have high scientific potential and may help them answer questions about, at the very least, the cause of death (e.g., sacrifice, natural causes, abortions). He states that there is ample funding for conservation and study of these skeletons – which he estimates would cost a few hundred of the 45,000 euro that the project apparently boasts in funding – but that the funding has presumably gone to conserving pottery rather than skeletal remains. Francesco Mallegni, an anthropology professor at the University of Pisa, says that he is baffled by the treatment of the skeletons, which represent a biological archive: "I would have expected that, after excavation, they would have been assigned to one or more specialists. Instead, it seems that they have been abandoned for years in a warehouse of archaeological materials, awaiting restoration and subsequent study, and are likely to be discarded and then lost forever." Mallegni notes that he always tells his students about the importance of skeletal collections, again using the term "archivio biologico," and he humbly offers his services - which would not cost much, he asserts - to properly study and conserve the skeletons in order to discover more information about health, status, and burial ritual in the Roman past.

I don't know the ins and outs of the archaeology system in Tuscany or Italy as a whole, having only been associated with the Superintendency at Rome. It's curious to me that both the archaeologist who excavated the skeletons and a well-respected professor who wants to study the remains have felt compelled to air these issues in a public forum. Is the timing of this news piece (press release? op-ed?) related to the recent controversies surrounding the collapses at Pompeii and the charges of financial malfeasance associated therewith? That is, does this piece represent simply a simmering (perhaps interpersonal) issue in the (bio)archaeology of Tuscany? Or are Mallegni and Zecchini capitalizing on the worldwide news coverage of Pompeii to shed light on other caches of archaeological material that need better funding and better oversight? What is their eventual goal in writing this, and whom do they need to convince?

I really only read the article, which showed up in my news feed, because of the picture and the title; 'The Neonates of Frizzone Risk a Second Death' is quite catchy - no one wants to think about the death of a child, much less think they are forgotten even to history. But there was no mention of the MNI of the infants - are we talking 5 or 500? - so I'm not clear on how large this cache of infants is. Its importance, though, isn't really in question because we don't have a lot of physical evidence of infants, infant mortality, abortion, stillbirths, infant burial ritual, etc., especially from the Late Republic.

It's great to see Italian archaeologists advocating so stridently for the timely analysis of skeletal remains. As many of the discussions of Pompeii have noted, though, Italy is rich in heritage but severely underfunds the study and conservation of that heritage. So it's also disheartening to see that these scholars need to advocate for the importance of the skeletons from Frizzone. This "biological archive" - a phrase I love because it's so Foucauldian - is important because burial ritual is, after all, a discursive formation within the archaeological record.

UPDATE (1/16) - I got an email today from Prof. Zecchini, thanking me for directing more attention to the Frizzone infants through my blog post. (I, in turn, should thank David Meadows for including the post in today's Classicarnival over at Rogue Classicism.) Zecchini pointed me at an additional article published yesterday that he co-authored with Prof. Mallegni about the issue. What I gather from this response is that Giulio Ciampoltrini of the archaeological superintendency of Tuscany has more or less said (perhaps in print?) that skeletons should only be studied when they are deemed to be of considerable anthropological importance. Zecchini and Mallegni counter that all human remains are important because "come archivi biologici, raccontano, a chi sa interpretarli, la storia di una vita, e molti scheletri raccontano la storia di una popolazione" - that is, the skeletons form a biological archive and can share their secrets with those who know how to listen; one skeleton tells us about one life, many skeletons tell us about a population. This is, of course, a point that I harp on in all my courses: anthropology takes the individual as its subject but wants to understand the collective.

Again, an interesting read (for those who know Italian) - including the anxiety couched as a joke that archaeology may devolve into "cocciologia" - which I guess in English we could render as "sherdology." And interesting for a bit of paleoanthropology that I wasn't aware of: the discovery of a calvarium in 1994 in Frosinone that has apparently been dubbed Homo cepranensis, which Mallegni has published on. I've emailed Zecchini back, asking for links to Ciampoltrini's statements. I've definitely gotten only one side of this discussion and am curious what Zecchini's and Mallegni's articles are responding to.

UPDATE (1/18) - I received a reply from Zecchini, who pointed me at an article in Obiettivo Tre on the "controversy" over the restoration of the infant skeletons. Zecchini, of course, feels that the infants (he told me by email there were 6, four of which were relatively well-preserved) are important for understanding funeral ritual at the site. Ciampoltrino, the superintendent of archaeology for Tuscany, spent 45k euro on the Museum of Capannori, which opened on January 8. The museum chose not to display the skeletal remains, he said. However, he adds that the skeletons, among many other artifacts, are being studied in the lab and that there is a clear priority for which are conserved first. There are several sets of skeletal remains that are ahead of the Frizzone infants in the queue, including the tomb of the Guinigi family, the tomb complex at the baths at Lucca, and a lombard tomb found in Lucca in 1988 that has dozens of bodies. Ciampoltrino is quoted in the article as having said, "Sono dell’idea che i corpi, anche se di età passate, dovrebbero rimanere sottoterra e non esposti, a meno che non ci sia una notevole rilevanza antropologica" - "I am of the idea that the skeletal population, even though it is from the past, ought to remain underground and not exposed, unless there is considerable anthropological importance." This seems to be what Zecchini and Mallegi picked up on: the idea that Ciampoltrino doesn't want to deal with the skeletal remains that were uncovered and, by inference, that he thinks bioarchaeology should not be done in Tuscany; the dead should be left alone.

It's been interesting following this story and trying to piece together who said what to whom in what forum. I'm still not sure that I know quite what is going on. Zecchini suggested that Ciampoltrino reported to the press in December that 45k euro were being spent on the museum and that the analysis of the skeletons was not being funded. Zecchini says that Ciampoltrino further said specifically that the conservation and analysis of the skeletons was not provided for within his budget. December was when Zecchini and Mallegi first made their bid for these infant skeletons to be handed over to Mallegni. I didn't find the December articles, though... or maybe they were emails?

This article does make Ciampoltrino sound like he's blocking anthropological research on the six skeletons only because he doesn't think they should ever have been excavated. I hope that the infants do get studied, and I believe that there are numerous fabulous bioarchaeologists in Tuscany who can do it. It will be interesting to learn how this "controversy" turns out.

ArcheoBlog said…
I am the mantainer of the blog ArcheoBlog and I noticed that you linked directly one of our images. This is considered a bad habit on the net bacause you are literally stealing our bandwidth. Can you please download the image first and then re-add it to you post using your hosting tools.
Thank you for the collaboration,
ArcheoBlog
25 January, 2011 14:39