Skip to main content
Posted by Kristina Killgrove May 12, 2010

The Other Dr. K 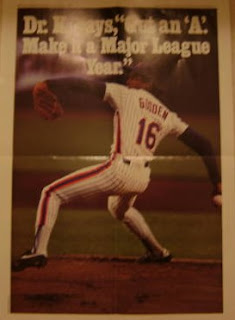 When I was in 6th grade, my math teacher, Mr. Roberts, had this poster in his classroom. It was of a sports figure that I had never heard of and read, "Dr. K says: Get an A - make it a Major League year!" The phrase stuck with me all these years, perhaps because I never knew who Dr. K was or perhaps because 6th grade math was interminably boring because it was so easy. (That said, that was the year I realized that I was a very haptic learner, as I'd failed spectacularly in my zeal to create my own method to use in multiplying and dividing fractions. It was also the year that a certain someone kept beating me on the Mad Minutes, for which I would not forgive her until high school.)

Because I have a ton of work to do, I found myself googling this morning for the phrase that's been popping in and out of my head often since I became Dr. K. I cannot for the life of me find evidence that this poster ever existed. However, I did learn that Dr. K is the nickname of the former baseball player Dwight Gooden. He was an impressive pitcher for the Mets for a decade, earning the nickname because K is the standard abbreviation for strikeout (and on analogy with basketball's Dr. J). At some point, Dr. K must have been famous enough to convince kids that hard work at school was important. By the time I was in 6th grade, the year was 1988-89 (unless my math is wrong, and Mr. Roberts can correct me). In early 1987, Dr. K got into trouble with police, and that eventually led to the Tampa Riots of 1987. At spring training the same year, he tested positive for cocaine.

Dr. K did return to baseball to play until 2000. But I wonder if Mr. Roberts didn't know about Dr. K's drug problem. After all, there wasn't the 24-hour news cycle that there is today, nor were athletes the super celebrities they are today. Or maybe after years of being in the same classroom, the poster just escaped my math teacher's notice. It seems odd to me that a motivational poster would stay on the wall after its subject was found to be the wrong kind of role model for kids. But I could be applying today's "moral" standards (e.g., an athlete's losing endorsements simply because he had sex) to the athletes of decades past.

At any rate, if anyone can confirm for me - with an image or with random recollections from 20 years ago - that this poster existed with this phrase on it, the brain cells that are being wasted on this memory would be most grateful.

UPDATE: And the grand prize of one million googles goes to Lynn Heath, who quickly found an eBay auction of the poster. Unfortunately, the auction has ended, or I might just buy it and put my own mug on it to terrify future osteology students.