Skip to main content
Posted by Kristina Killgrove May 09, 2010

I learn new things every day, not just as a researcher but also as a mother. I'm especially geeked out when those two worlds collide. After Chickpea was born, I would joke that the only thing this blonde, blue-eyed kid inherited from me was one ear. We both have a little bump on the outer ring of cartilage on the right ear. I'd never noticed, but when I told my mom, she mentioned that she had it too. It was pretty cool to find such an obviously inherited trait, but I thought it was just random ear morphology. 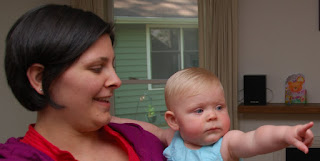 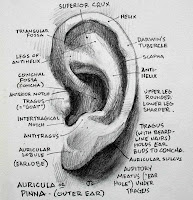 Turns out, there's an even cooler name for it: Darwin's tubercle. At the beginning of Descent of Man, Darwin apparently pointed out this extra bit of flesh on the helix of the ear as a homologous trait between humans and primate ancestors, the remnant of a once-pointed ear. A Spanish anthropologist found in the 1980s that it was present in 10% of the population surveyed in Madrid, but I don't know if the frequency varies based on ancestry. I also don't know if it's usually bilateral or asymmetrical - in my family, it's the latter, although curiously I think my mom has it on her left ear, but Chickpea and I have it on our right (as you can kind of see in the picture above, even though my hair often covers my right ear).

Wikipedia claims that the auricular tubercle has been associated with royalty, both in humans and in other primates. While I doubt the veracity of this claim, Chickpea does seem to think that her sole duties in life are to be fed, clothed, loved, and entertained by her mother. Fortunately, I don't mind treating her like royalty.

Anonymous said…
"the remnant of a once-pointed ear"

Anonymous said…
Haha! Cecilia is a great name. After reading this article a while ago(link below), I have realized that some people name their children absolutely crazy things.

Unknown said…
Chickpea has lovely eyes! Check out this little collection I did on eye colour: