I've finally crunched the numbers for my dietary analysis. I was holding off on this chapter in the hopes that I would get some additional data in the form of re-run samples, but no such luck. So I have 33 people with both C/N isotope data and an additional few with just apatite data but no collagen. I also have apatite data from these people's first molars thanks to the archaeochemist who did my oxygen isotope analysis, meaning I can compare the whole-diet carbon between birth-3 years and a decade or so before death in the same person.

What I've found is that the N values of the people at both Casal Bertone and Castellaccio Europarco are similar to the N values of other populations: the Christian burials at St. Callixtus along the Appian Way, the Imperial population at Portus Romae, the Romans from south of Naples at the site of Velia. So the marine component of the diet was more or less the same - people were eating both freshwater fish and seafood. Interestingly, the C component is hugely variable, both within the populations and between sites. The people tested from my suburban site, Castellaccio Europarco, have the highest d13C values on average of any of the aforementioned Imperial-period people. Because their N values are more or less the same as the other sites, the increase in C is likely related to consumption of C4 plants. This does not necessarily mean that they were eating millet or sorghum directly; both are excellent fodder for ruminants (goats and cows), bones of which were found at Castellaccio. The people of Castellaccio were therefore eating millet and/or the tissues (meat, milk) of millet-fed animals, more so than the people at urban Casal Bertone. 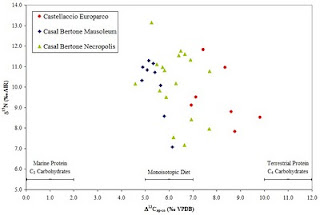 At Casal Bertone, there were two burial contexts: a mausoleum and a necropolis. Until now, I had found no differences in the skeletal population to indicate the mausoleum people were of a different status than those buried in simple pits in the necropolis. The dietary study, however, shows that the mausoleum folk have a much less varied diet than those in the necropolis; their d13Cap values change little from infancy to adulthood. I think this means they had more consistent access to food than those people in the necropolis, whose d13Cap values are widely divergent, particularly in the teen and adult age groups (10-40 years old). In comparison with Portus Romae, I see much higher C values at Castellaccio indicative of millet consumption, less variation in older individuals at both sites, and no real differences between the diets of males and females. The diet of my Romans is quite different from that of the people at Callixtus, who researchers concluded might have been eating a lot of freshwater fish and C3 plants and therefore have surprisingly low C values. But this is not terribly surprising, as both Casal Bertone and Castellaccio were several kilometers from the Tiber, meaning it was more difficult to access freshwater fish.

It would be great to test some goat and/or cow bones from Castellaccio to see if they are indeed enriched in d13C. A similar study was done in Roman Egypt, where the researcher found heavy C isotopes in these ruminants and in the males and subadults from the site, concluding that the kids were drinking goat/cow milk and the men were eating beef/mutton. But first, I need to finish up this dissertation... I have to force myself not to do more isotope analysis until it's done. I have one goat metapodial from Castellaccio, but more goat/cow samples will need to be procured and tested before I could publish the dietary study suggesting the people of Castellaccio ate C4-fed animals. Right now, my evidence is very circumstantial.

The most interesting part of the dietary study for me, though, is the fact that I have d13Cap data from the enamel and femur of several of the individuals I have already identified as immigrants based on their Sr/O values. Almost all of the identified immigrants (for whom I have dietary information) have strikingly different d13Cap values from their enamel than the rest of the population that was presumably born locally. Two individuals have quite high d13Cap values, again, likely indicating consumption of C4 plants either directly or indirectly, but two have quite low d13Cap values, indicating an almost completely terrestrial diet (i.e., no input from fish, garum, etc.) as kids.

And finally, the person with the highest d13Cap enamel value, a 14-16-year-old, also had statistically different Sr and O values that were consistent with an origin in North Africa or even Nubia. Based on the aforementioned Roman Egypt dietary study, if the practice of foddering animals with C4 plants was common in this area, the enriched C signature makes sense: this teenager came to Rome from North Africa. Interestingly, his/her d13Cap value from bone was very close to the Roman range for Casal Bertone, indicating s/he possibly came to Rome several years before death, enough time to adopt a "Roman" diet. Unfortunately, this individual was not terribly healthy, with evidence of cribra orbitalia, some sort of infection along the spine (which I can't conclude for sure was tuberculosis), periostitis, and other nonspecific skeletal conditions. So this person has turned out to be the most interesting in my study - and of course I want to run more tests, like DNA analysis to see if s/he was African (or of Roman ancestry living in Africa?). Third molar data could help me narrow down the age at which s/he came to Rome as well.

I'm very glad that the dietary study has not been completely worthless. I was worried that it would be exactly the same as the dietary study from Portus Romae. But it turns out that: 1) not every population has the same diet; 2) people in the Roman suburbium were consuming more C4 plants than urban people; 3) there are status differences between the mausoleum and necropolis populations from Casal Bertone; and 4) most of the people who immigrated to Rome had different childhood diets, some with strikingly high amounts of C4 foods. That's a lot of information from isotope analyses that I assumed would give me very little! As soon as I finish this diet chapter, I finally get to write the chapter that I've been anticipating for years: answering the question about what life was like for immigrants to Rome.