Sulphur? I hardly know her!

I had a thought the other day: perhaps I could test the individuals from the Casal Bertone mausoleum in order to figure out if they worked in the nearby fullonica or not. Not a whole lot is known about the ancient process of fulling, except the salacious fact that fullers used donated urine to clean the cloth. After it was cleaned (the ammonia in the urine reacting with the natural grease in the wool to form a kind of soap), the light-colored cloth would be bleached. This was done using a conical frame, upon which the wet cloth would be draped, and a pot of burning sulphur underneath (or sulfur, if you prefer the American spelling). There's a drawing of this from a house in Pompeii: 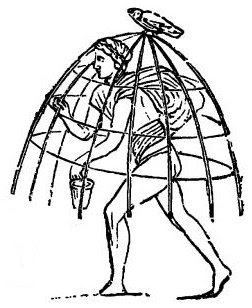 This got me thinking: I wonder how bad sulphur inhalation is for a person? Sulphur in and of itself is not toxic, and in fact is required for life, but products such as sulphur dioxide can cause problems, especially neurological and metabolic issues. Presumably, sulphur is also incorporated into the remodelling human body the way that C, N, and Sr are. So if a person worked in a fullonica, would he have had more exposure to sulphur and thus higher levels of it in his bones?

I can't seem to find a lot of information online about either isotopic or trace element analysis of sulphur in an archaeological (bone) context. It's all about petroleum and fish and stuff. I think I'm looking into trace elements rather than isotopes, as I think the isotopes would help me identify if someone was an immigrant (sulphur being concentrated more in volcanic areas like Rome). But since it's trace element analysis that can help prove Pb poisoning, perhaps it can also prove S poisoning? There's a lot about anthropogenic Pb and how to test for it (which would be pointless in Rome, as they used lead to line their aqueduct pipes, in ceramic production, and even flavored wine with it!), but I can't find much on anthropogenic sulphur. I wish I had a chemist friend... or even an archaeological trace element analysis friend... someone to tell me if this is an avenue worth pursuing or not.

Unknown said…
Sulfur Dioxide reacts with water to form Sulfurous acid (H2SO3), so when a person breathes it in, it would become acidic in their membranes and lungs. I'm not sure how the body gets rid of it, but it might react with your blood's buffering compounds and excreted, or some sort of sulfur salt could be formed, much like anthracosis in smokers.
24 November, 2008 12:56

Sara said…
I've never read anything in the paleopath lit, but I wonder if looking towards Greece and the oracles, who were thought to have breathed in sulfur fumes to make predictions, would help?
25 November, 2008 20:04