A geologist in the Geosciences Department had an idea: she could set me up with a hand-held dental drill so that I could mill out enamel, rather than my using the micromill. The latter takes, on average, an hour per sample for set-up, drilling, and weighing the enamel. This was fine with me over the summer, when no one else was using the micromill and I could leave it conveniently set up for my needs. But the geologist's grad student is now in need of the mill - something about how their mill is out of commission because of construction. I knew a simple Dremel wouldn't be precise enough for my purpose - drilling out 5-20 mg of enamel from the area between the dentoenamel junction and the occlusal surface of the tooth. But the hand-held dental drill seems to work.

The set-up is similar to this picture: the dental drill attaches to a motor that powers it, and it has a rheostatic speed gauge. The drill takes the exact same bits as the micromill, so I hunted around for a nice, fine-pointed bit and installed it. But it's hard to eyeball the area that needs to be drilled. So I mounted the teeth onto a large glass slide and set it on a really, really nice Olympus microscope attached to a computer. Using the microscope software, I got incredibly good magnification of the tooth and, bonus!, it can capture the image as a .jpg. (It might be able to do movies too, but I haven't figured out how yet.) So I spent a few hours today milling enamel out of a bunch of teeth until my hand was tired of holding the drill. Because there's a scale on the table just behind the microscope, it only took me 15-20 minutes per tooth to prepare and drill the enamel. That's still a long time, considering I have about 70 samples left to drill, but it's a far cry from 1 hour per sample.

Since the microscope could take pictures, I decided to take one of a first molar with a carious lesion (cavity). I was instructed in Italy not to take a tooth if it had a lesion in it but to pick another one of the four molars. But if all four teeth had carious lesions or if there was only one molar, I documented the lesion and took it home with me. This is a picture of the middle section of a tooth with a carious lesion that started either interproximally (between two teeth, where food can get trapped if you don't floss) or occlusally (the chewing surface). Notice how the discoloration extends all the way into the pulp cavity. The enamel is largely gone and the lesion is extending into the dentin, but there's no breech of the pulp chamber yet. There's definite softening of the enamel, though - which I could also tell as I drilled through. At this magnification, you can even see the nice parallel striations from the diamond saw blade I used to section the tooth.

And this is why it's fun to be an archaeologist - the thrill of using new lab tools to do weird stuff to ancient dead people. 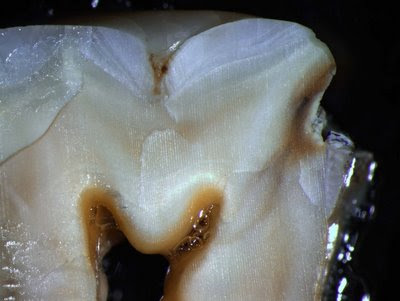