I'm not sure if it's ok to take a camera into the isotope lab, so I haven't reported on my goings-on over the past couple weeks. After finishing up the micromilling of 30 teeth, I needed to do strontium columns this week before leaving for England. Strontium columns are actually like tiny plastic funnels with a tiny little filter at the bottom. They rest in a plastic tab that sits on top of a waste beaker. All this means that they're really easy to spill if you don't watch yourself. So this is the really chemistry-intensive part. By that, I mean the part where you have to put a certain number of drops of various molar nitric acid into the little funnels. And wait. And do it again. And wait. At the end, what happens is that the resin (held into the funnel by the filter) magically makes any water that passes through it able to collect strontium - and only strontium. Then you have a beaker with about 500 microliters of water-n-strontium. Drop in some phosphoric acid, and it's time to boil it down. 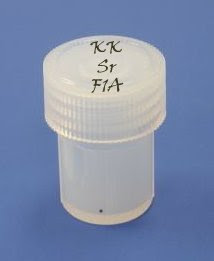 Here's where it gets kind of crazy. The idea of strontium in solution is easy enough for me to accept. But then you have to simmer the water off. It takes about 8 hours (although some were done in 4 because of their placement on the hot plate), and then you get this. See that little tiny dot at the bottom of the little tiny beaker (fakely mocked-up since I don't have a real pic)? That's strontium. About 5 micrograms of it. A tiny brown dot, about the size of the head of a pin.

Eventually, these little Roman pinheads will get loaded into the mass spectrometer, and at some point I'll get a bunch of numbers for the strontium levels in my samples. I'm not entirely sure how these numbers get interpreted, but at the very least I can compare the 33 human samples with the 2 animal samples and - I hope - be able to tell if those 33 people were immigrants or not. But I won't know until someone switches the mass spec from neodymium back to strontium.