I'm always too cheap to pay for a glossy, GUI, point-and-click statistical program, and I waffle between SPSS and Systat. Generally, I prefer Systat because it's easier to use, and the bells and whistles don't drag it down like they do SPSS. Plus, it produces prettier dendrograms than SPSS's icicle and monochromatic ones. 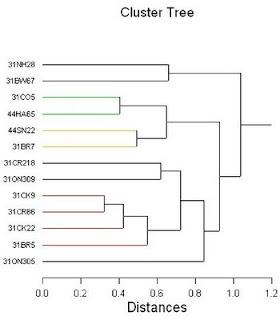 Today I needed to generate a simple cluster analysis and dendrogram and downloaded the trial versions of both SPSS 16.0 and Systat 12.0. Annoyingly enough, neither of them worked, probably because I had downloaded the trial versions in the past and they expired. But I discovered that Systat puts out a free version of their program for students. It's called Mystat and, although it sounds like a feminine hygiene product, it actually works pretty well for my purposes: relatively simple statistics. I mean, if I want to do really complicated shit, I'd probably suck it up and learn R. (Kidding. R is impossible for social scientists to understand.) The download took a while, but Mystat quickly installed and I had made this lovely, color-coded dendrogram in under 2 minutes. It tells you that Native Americans on the North Carolina coastal plain in the Late Woodland period have some geographical differences in the expression of genetic traits. Nevertheless, they all still interbred (based on a different statistic). No matter how hard I try, I keep getting sucked back into sidelining in population interaction in ancient NC.