Skip to main content
Posted by Kristina Killgrove May 14, 2008

Quite a lot of students did projects on blunt trauma. Most of them also included hilarious pictures of themselves actually enjoying creating their final project. So here's a summary of what they turned in.

1. Joe and Pete, my two rather imposing football players, used lower leg and foot bones of a pig that Joe had kept remains of in his freezer (why, I don't know). 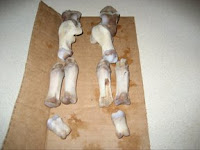 I knew it was going to be an interesting couple of reports when their presentation last week started off with a slide that said, simply, "One 45-lb piglet was severely harmed in the making of this project. Rest assured, he was delicious." As you can see, their pictures are really not all that great. They found it difficult to crush the pig using their blunt instruments (a tire iron and homemade mace), which I attribute to the fact they were trying to crush the calcaneus of a young pig. Throughout the semester, Joe was quite the card in class, and his paper did not disappoint. In his report, he notes that, "This would prove to be one of the more interesting school projects known to man." He also felt that he broke the bone "because I have the strength of many men." My favorite line, though, was his insistence that their project was awesome because, "as usual, our every movement was calculated genius. The results of the pig smashing were fantastic at worst."

2. Kelly and Ciara also procured some pig parts and inflicted trauma on them with a hammer, a rubber mallet, an iron wrench, and a 2x4.

They got ultra-fresh legs that apparently bled when they whacked them. Their pictures aren't great, but I did very much enjoy this photo of Kelly pretending to eat it after traumatizing it. The wrench caused a complete fracture of the femur they had (which honestly looks like an os coxae - I'm not convinced the butchers at the meat market know the difference between the two bones of the hip joint), while the mallet simply caused a dent, and the 2x4 and hammer caused small fractures and some radiating fracture lines from the point of impact.