Skip to main content
Posted by Kristina Killgrove May 07, 2008

Do you see what I see?

This is the third paper I've received so far from a student (I gave them a final project rather than an in-class final), but it's the first one that included pictures. Two of my students, I'll call them Sarah and Brian, ended up doing sharp trauma to bone. They couldn't find pig legs as I suggested, so they bought a rack of ribs at the grocery store. Sarah took pictures while Brian, wearing pink dish gloves for no apparent reason, hacked into the ribs with a steak knife and some kind of meat fork. The videos they showed in class were pretty entertaining, as Brian made all kinds of silly noises as he thrust the knife hard enough to cut bone. So I was perusing the pictures he just sent me to accompany his paper and happened to zoom in on this one. It looks innocuous enough - I mean, except for the gloves and the raw meat and the hackage. But then something caught my eye - what seemed to be a grocery list taped to the cabinet (in what I presume is the kitchen of Sarah's shared apartment). So here's a close-up for you. Just read the last two lines. I laughed my ass off. The moral of the story is: crop your pictures before sending them to your professor. (Update: They sent me a video of all their pictures. It's cute.) 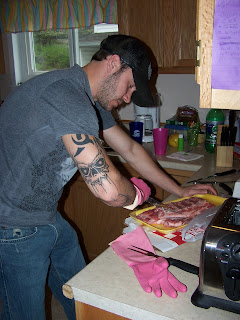