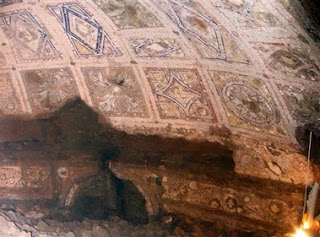 Catherine sent me a link to this story on the discovery in Rome of what could be the Lupercale, the cave in which the she-wolf supposedly suckled Romulus and Remus. It was found recently deep within the Palatine Hill, near Augustus' palace. The latter is set to be restored, commanding a $17.5 million price tag. While I think this discovery is terribly exciting, I do wish that more money could be given to the everyday projects that the Soprintendenza Archeologica di Roma undertakes. In the US, classical archaeology is often seen as a practice that seeks only to find important, historically-relevant sites and people. Projects such as skeletal analysis of people from ancient Rome's suburbium are severely underfunded, because who wants to know more about the poor and immigrant populations when we could funnel money into saving a cave that might or might not be a religious site? Obviously since my dissertation research is on these underrepresented, underresearched people of the Empire, I am a bit biased against sensational claims to history-making (or history-recreating) discoveries. Roman archaeologists in both Italy and the US need to start putting out press releases and otherwise announcing their discoveries of the "mundane," contextualizing the importance of these studies for our understanding of the past. As the population of contemporary Rome grows, we stand less of a chance of uncovering every last religious building that stood on the seven hills, but more of a chance to find out about the lower class in antiquity, those people who lived just outside the city walls, who worked for a living, who suffered from tuberculosis and leprosy, and who died without making history.