Last weekend, I went to the giant flea market in Rome, which is just across the Tiber. It took me an hour to get there and longer to get back, and when I told my roommate that I went, he asked why I didn't just go to Porta Portese II - which is about 1km away from my house. I had totally forgotten about it.

So this morning I walked over to the east-side flea market (does that make me a Blood or a Cryp?). Unlike Porta Portese Classic, which has loads of tourists, the one I went to today had tons of crazy-looking Italian people (I swear this one guy had the exact facial bone structure of a robust australopithecine) wearing strange things and selling even stranger things. For example, I particularly wanted to buy the woven rug that had the faces of, from left to right, RFK, MLK, and JFK on it. Maybe the Italians think that these three were related because they are all known by their initials and their last names start with K? Maybe they are interested in the conspiracy theory surrounding their assassinations? I honestly can't explain why anyone would put these three together, much less weave them into a rug. There were also 5E tshirts with JP-to-the-Deuce on them, as well as shirts that proclaimed in Italian things like, "I wish you would die," and, well, some rather more colorfully worded ways to tell you to go away. I didn't bring a camera, or I would have taken a picture of a little food truck that had painted on it a scene of several Smurfs - including Papa, Smurfette, and Brainy - making spaghetti, with oddly anthropomorphized chunks of parmesan floating overhead.

I bought a hoodie that has a really cute design on the back, and on the front says "SP 68 Beautily." And that was the least Engrishy design. Although I of course saw completely strange shirts - like the guy wearing a seemingly brand-new tshirt that said "Breast Cancer Foundation Fundraiser 1993, Washington, D.C." and the woman wearing a shirt proclaiming she had visited "Assateague Inn, Assateague, Virginia" - these were the most entertaining to me: 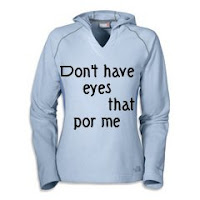 First, to the hoodies. There were just so many hoodies with random English words on them that it was hard to choose which ones to post. This one, of course, makes no sense and is definitely Engrish. I tried to figure out what they were trying to convey: Don't have eyes that bore me? (That would be a kind of pun at least.) There weren't any graphics on the front to help me out either. 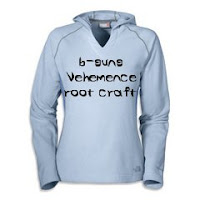 And the classic method of throwing random words onto a shirt with the hopes that one of the words will catch someone's eye and they will buy it is at work with this hoodie. Not sure of the significance of "b-suns" or "root craft," but Italian has the cognate veemente. 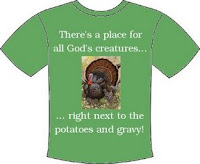 This shirt just made me laugh. The English is perfectly fine, and this is absolutely the kind of shirt I would expect to see on denizens of the Shenandoah Valley just over the mountain from where I grew up. However, although Italy does have turkey today, it's hardly an indigenous species. More to the point, this tshirt celebrates Thanksgiving, a decidedly un-Italian holiday. I suppose Italians probably have a version of gravy, and they have potatoes, and turkey... but the tshirt was still quite out of place here. 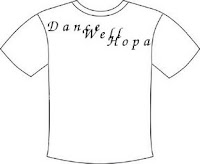 On my walk to Porta Portese, I was briefly behind a guy who had this on the back of his button-down short-sleeve shirt. My only guess for understanding it is that it's actually Grenglish - two English words and one Greek word (the Greek drinking/dancing cheer) rendered in the Latin alphabet. 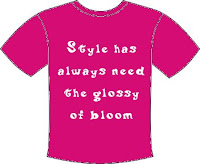 And finally, because you were good little boys and girls, this was the back of a tshirt that I saw on a woman while I was walking home from work the other day. What truer sentence has ever been uttered than, "Style has always need the glossy of bloom"?


(Random aside: If anyone can tell me how to manipulate tables and paragraph spacing in Blogger, I'd appreciate it. As you can see, editing the HTML to make a table results in weird spacing issues, and I don't understand their weird div paragraphs.)

Patrick Reynolds said…
I think what you want is <img src=... align="right">, then your text, then <br clear="all"> just before the next image. Blogger seems to generate the align="right" bit on its own, but maybe not the br tag.

You're not supposed to (have to?) use tables anymore unless you're presenting actual tabular data.
23 September, 2007 10:37

Kristina Killgrove said…
This definitely looks better than my table solution. The problem is that Blogger (or I suppose it's more likely IceWeasel) often doesn't let me drag and drop images where I want them. I can only get them to hang out at the top of the post. Anyway, as Patrick knows, I manage to break every computer program possible, so it's prolly just me.
23 September, 2007 11:05