As it was nearing 4pm yesterday, I noticed that the skeleton I was laying out on the table had some major foot issues. He was a teenager of about 16-18 years old and relatively tall for a Roman. His lower leg bones showed some evidence of periostitis, or extra deposition of woven bone that often results from injury to the shin. More interesting than that was the fact that five of his tarsals, which make up the back half of the foot, looked as if they had severe arthritis and that his metatarsals and phalanges were very light and their shafts very thin. As you can see in the photo, 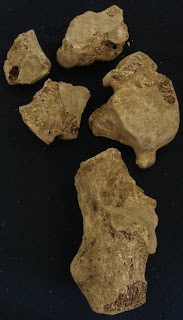 the arthritis presents as enlarged articular facets where one tarsal bone meets another. Tarsals, unlike carpals which help you move your wrist in all sorts of fun ways, are generally not very moveable bones, so it is odd that anyone would have severe arthritic changes in these bones, much less a 16-year-old kid. What this means is that he did not have a normal gait and that, based on evidence on the outer edge of the largest tarsal (calcaneus), he walked with his ankles turned outward and his feet turned inward.

The problem is attributing this odd manner of locomotion to a specific disease. The two likeliest candidates are congenital clubfoot and polio. Clubfoot affects numerous infants each year, boys more than girls, and is more or less easily corrected these days with shoes, braces, and sometimes surgery. Sometimes it affects just one foot and sometimes both. However, there is normally a deformity of the talus, where the lower leg bones articulate with the ankle, and this kid's talus looked relatively normal. The other possibility is polio, a highly contagious disease that caused paralysis and permanent def0rmity in children from at least Egyptian times up through the 1950s. Polio can cause muscle weakness and paralysis, and if someone tried to walk on his feet in spite of this, the bones could remodel to compensate for the new stress. Polio, however, often randomly affects one or more areas of the body and does not generally attack, for example, both feet. It is also possible that this kid just had very high arches and walked with slight eversion of his feet, but the light and thin metatarsals and phalanges would seem to argue against that.

One further interesting piece of information comes from the archaeological report. During excavation, numerous small nails or tacks were found in his grave in a line near his feet. Excavators note that these are the remains of calzari, or a kind of Roman footwear. However, because of the talar deformities and the periostitis that extends only up to the midshaft of the tibiae and fibulae, it is possible these are the remains of a kind of leg brace that helped him walk. I will have to wait for more photographs and archaeological information before I can interpret these nails, however.